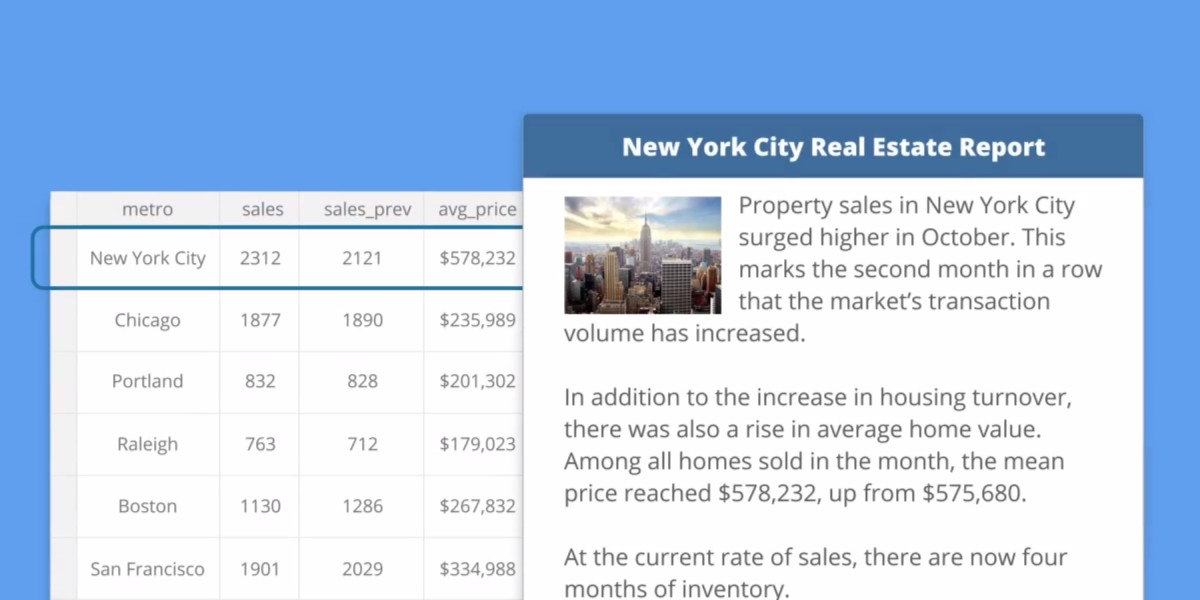 Automated Insights has opened up beta access to Wordsmith, its platform for automating repetitive, time-consuming writing tasks using your data.

Wordsmith reads data that you upload, such as a CSV file of a company’s quarterly earnings, and follows a story structure that you define to generate readable content on-the-fly. That includes financial reports, easily digestible bill statements, product descriptions and even summaries of Game of Thrones battles.

The Verge notes that Wordsmith lets you create complex stories out of your data with branching paths that describe your input. For example, it can paint a picture of just how important or trivial a company’s loss of $1 million is, and note whether a 60-inch TV is massive or of standard size.

Some may argue that there is already too much content floating around. I agree. The problem is that it’s generic, untargeted content. At Ai, we focus on personalized content. Instead of writing one story and hoping a million people read it, Wordsmith can create a million stories targeted at each individual user and their preferences. It’s a story that is totally unique to each user because it is powered by their data.

Given that Wordsmith requires a fair amount of customization to generate quality content that suits your needs, it’s more suited to large organizations that frequently need to turn data into stories, rather than for individual reports.

It’s a valid concern as to whether Wordsmith’s technology will cause journalists and executives to lose their jobs in droves. However, in January, both the AP and Automated Insights noted that no jobs were lost due to implementation of the new system.

In fact, in the AP’s case, it led to fewer errors in reporting. And by having software bear the brunt of churning out tedious reports, employees can be freed up to focus on more nuanced analysis and interesting stories that can’t be spun up just by reading raw data.

Wordsmith’s beta is now open and you can request access on its site. The company hopes to make it available to the public in January next year.

➤ Introducing Wordsmith: Using Data to Reinvent How We Write [Automated Insights via The Verge]

Read next: How the Casio F-91W became the world’s most versatile (and dangerous) watch