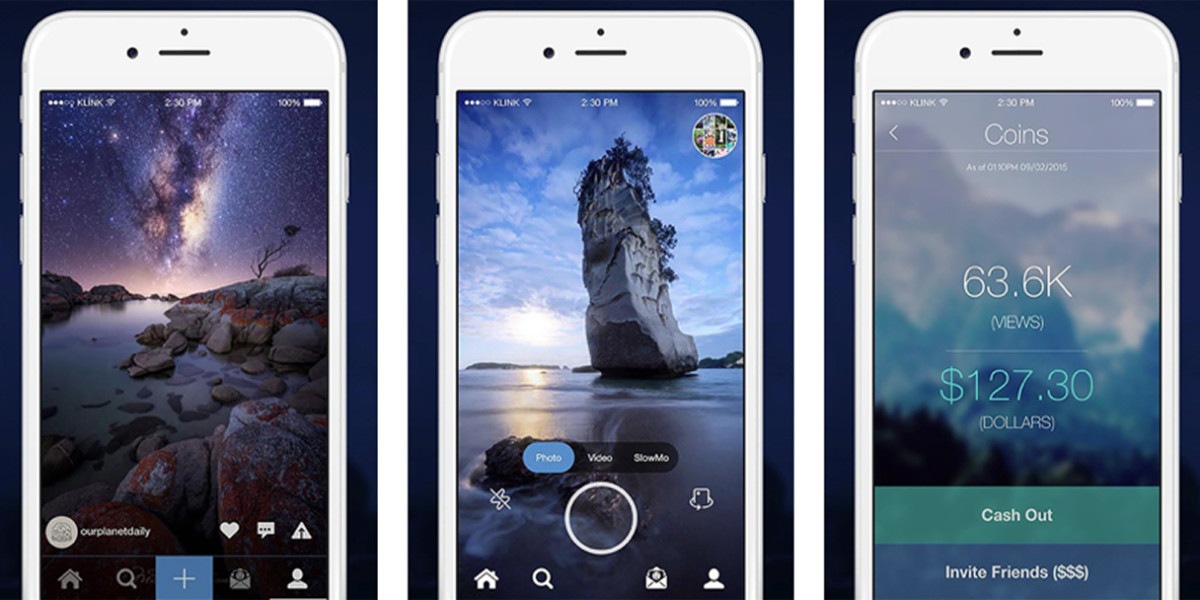 Posting your panoramic landscapes to Facebook, Instagram, Twitter and other social networks is fun: nothing beats the instant gratification of praise and thumbs-up from friends and family. But one thing that probably won’t happen is any sort of financial renumeration.

No, you’re not in it for the money — but extra cash to put toward a new camera card or lens or storage drive is always welcome.

Klink, a new photographic social networking platform, aims not only to get you that critical commentary from viewers, but throws a few bucks into the mix. Its new iOS app, which has just emerged from a three-month beta, links to the social network as the system generates payment for frequently viewed photographers.

Users can publish full-screen photos and videos (up to 20 seconds) from either the app’s built-in camera or the camera roll. Klink then pays users $2.00 per 1,000 photo views, counting only unique views. In addition, you can share photos with other Klink users and other social networks.

A 99-cent in-app purchase lets your photo appear on a “Featured” feed to boost visibility. Influencers with a high level of page views get a separate “Creators” tab on the home screen. The app’s video camera lets you create montages by switching between gallery and live capture footage, as well as post videos in slow motion and in reverse.

The app uses intelligent graph API and computer vision processes to assist users in finding images with search terms rather than hashtags.

There are apps out there like Clashot, Snapwire, Foap and others that sponsor missions, company requests or are geared toward photo licensing, but Klink (the sound of a coin dropping) is designed first and foremost as a social network.

The company generates revenue via banner ads, interstitial video, native advertising and in-app user purchases. Klink is available for free in the App Store and is currently in an open Android beta.

Read next: IceCream lets you pack more pictures into your iPhone by saving image calories