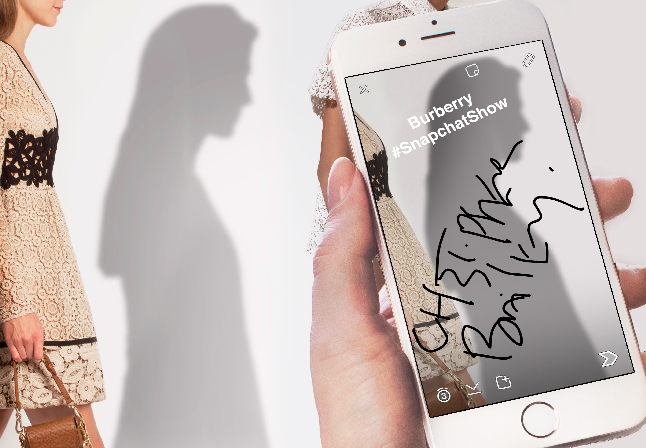 After announcing a partnership with Apple Music earlier this week, British luxury brand Burberry has revealed that it’s also teaming up with Snapchat to debut its latest collection a day before it hits the runway at London Fashion Week.

The Snapchat broadcast will start on Sunday and disappear 24 hours later, as the runway show kicks off in London.

As well as Burberry’s new collection, the Snapchat story will offer a behind-the-scenes peek at the madness backstage before the Fashion Week show and the preparation involved in the days ahead.

It’s interesting to see Burberry ramp up its social media activity as it gives the brand a much broader audience, beyond the press and buyers attending the actual shows.

Other brands like Louis Vuitton and Misha Nonoo have done similar things, but Burberry has long been ahead of the curve when it comes to social media; no doubt that’s down to the creative minds of Christopher Bailey, the company’s current chief executive and his predecessor, Angela Ahrendts, who now heads up Apple’s retail division.

Burberry was one of the first brands to embrace Twitter and Instagram, to integrate iPads in its stores and to make its collections available online. Earlier this year, the brand also premiered one of its US runway shows on Periscope, which Burberry says generated over 100 million impressions.

The channel is already live and showing things like the weather in London (sigh), a sneak peek at the guest list and the decadent invitations being hand delivered (I’m still waiting on mine). The Spring/Summer 2016 preview will kick off at 7pm (GMT) on Sunday before disappearing Monday as the runway show in Kensington Garden gets underway.

Burberry is doing what a lot of marketers are struggling to do, generating massive engagement by mixing up its content with short-form and streaming features.