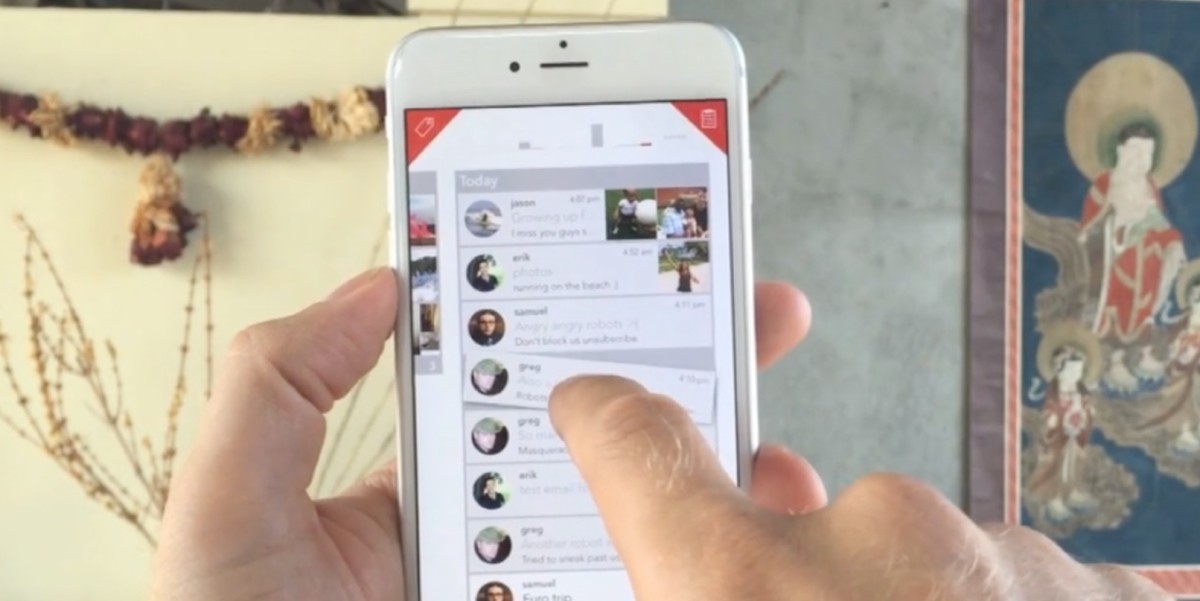 From Mailbox to Hop, via Outlook’s mobile apps, there’s been no shortage of fresh takes on email over the past couple of years, and Geronimo – released today on iOS – is one of the most ‘out there’ examples I’ve seen.

Just take a look at the promotional video below. The combination of gestures, shakes, taps, the pencil tool, ‘hot corners’… it’s a lot to take in.

…oh, and there’s an Apple Watch app too.

Yes, Geronimo isn’t a simple ‘load it up, follow a 10-second tutorial and start using it’ type of app. Instead, you’ll need time to learn and experiment to take it all in.

Some of the unusual aspects include an inbox that sorts emails by day. The days are arranged horizontally on the screen (complete with a ‘pull left to refresh,’ rather than the usual ‘pull down’). Inside each day, emails are displayed vertically, with each one popping open as a card. If the message is part of a chain, you can swipe left to view the previous instalments.

As with any modern email app worth its salt, there’s a snooze function to bring an email back to your inbox at a later time or date. When you’re done with each message you can drag it to any corner of the screen. Two corners are preset to ‘archive’ and ‘tag’ functions, and the other two have user-set functions, but by default are set to add an email to your in-app to-do list or delete it.

Those are just the basics. This is an app built around discovery, and finding as much of what’s there as works for you. A set of GIFs in the help menu teaches you the finer points of what’s on offer.

In the help menu, you’ll see some features listed as locked. That’s because developer Jumpin’ Labs didn’t want to overwhelm users from the off (they’ll have enough on their plate to learn as it is). Features like flicking between days and archiving all emails will be unlocked as you master other elements of the app.

A progress bar within the app fills up as you try new features, helping you see how far you’ve got towards mastering everything it has to offer.

So, is Geronimo for you? I’m not sure it’s for me. I like an email app that’s simple, lets me quickly delete, archive and snooze messages… and that’s it. I don’t want email to rule my life– I want to be in and out and on with my day.

This is an app for people who love email and want power tools and the learning curve that comes with them. If you devote enough time to Geronimo it could make you way more productive than I’ll ever be.

Read next: How to brand yourself and your business