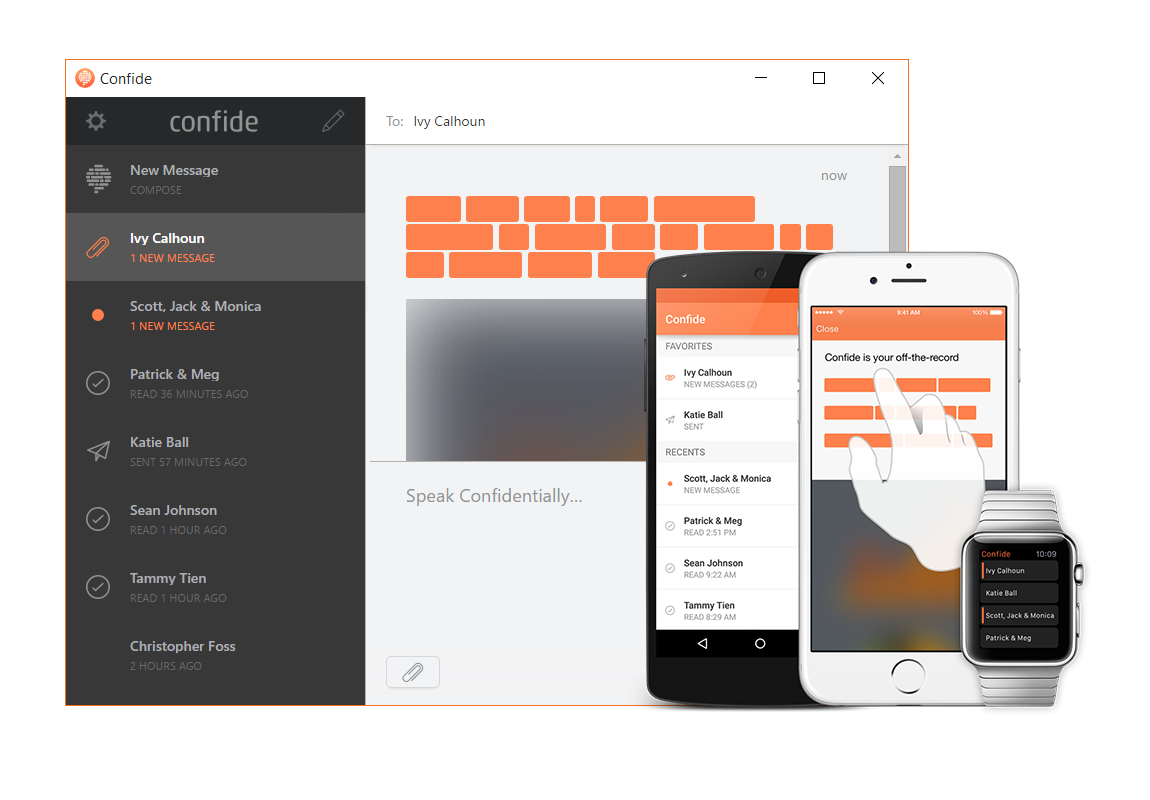 Off-the-record messaging app Confide, available for both iOS and Android, has spread globally in the 18 months since its release. Currently translated into 15 different languages, the app has provided destructible, screenshot-proof messaging in more than 180 countries.

Today, the company introduced Confide for desktop, a native application for both Mac and PC.

“We’re trying to take that tried-and-true, valuable in-person communication experience and bring that into the digital age,” Jon Brod, co-founder and President of Confide told TNW.

Brod said that the company expanded to desktop in an effort to bring Confide into professional settings, and to bring better off-the-record communications in the office.

Confide for desktop offers many of the features that users from the mobile version enjoy, including end-to-end encryption, messages and images that appear only when they are hovered over and destruction of the message after it is read.

Brod also noted that Confide for desktop includes screenshot protection on both desktop versions: if a user attempts to take a screenshot, either through print screen or the Mac’s screenshot abilities, the result is just a blank square. I attempted to take a picture of my Confide message, but just received a rather boring grey square.

Brod’s hope is that Confide’s features will fit right at home in transferring confidential or sensitive work information, rather than entrusting it to email servers or the cloud. Brod envisions his desktop customer as a little different than mobile-forward users that are already on Confide — though both are important to the startup’s growth.

It’s important to note that although Confide is screenshot-proof and offers encrypted, destructible messaging, it’s not anonymous. A valid email is required to use Confide, and it will pull in your known email contacts to help make it easier to find friends. You can also opt in to add your phone number and a Google account to help find and invite people you’d like to chat with.

However, Brod reiterated that Confide doesn’t maintain access to the specifics of that particular data.

Brod said that interest in Confide has increased with news of hacking scandals — in particular the Sony hacks that took place late last year. He also insists that Confide isn’t for innocuous messaging that could be sent via text with considerably less fuss. Rather, it’s the transfer of sensitive or confidential information that we should be mindful of, and that is Confide’s purpose.

“Any way we communicate digitally, we should be expected to be exposed at some point in the future,” Broad said. “So Confide really helps all of those vulnerabilities.”

Confide, in all of its forms, is available for free.

Read next: Product Hunt LIVE is an AMA for the entrepreneur community