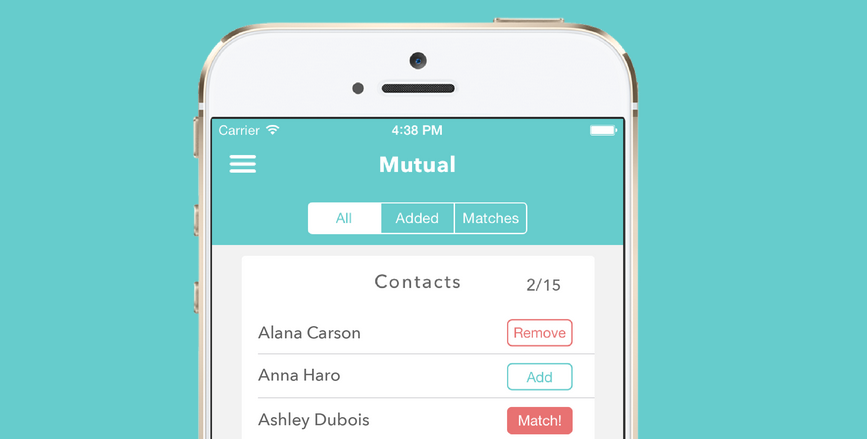 I’ve been writing a lot recently about the disconnection between the predominantly male, predominantly white ‘thinkers’ of the tech orthodoxy and vast swathes of humanity. And lo and behold, Product Hunt puked up a perfect example of the division.

Mutual is an app that purports to help you to “find out which of your friends secretly like you.” It does that by allowing you to select 15 acquaintances from your address book and spam them with an anonymous text message.

@brokenbottleboy if you like someone, tell them and be a grown-up. If you're not able to say it to my face, I'm not the one for you!

The SMS tells the recipient that they have an unidentified admirer and encourages them to download the app and create their own lists of crushes. If you’re on their list and they’re on yours, the app notifies you and presumably you can both glory in how creepy you are.

That’s the thing about Mutual. It clearly comes from a kind of playground mentality to dating, where it’s easier to send an anonymous note than to actually tell someone you like them. Its model is about chasing viral success – building its user base by playing on curiosity – but it ends up feeling like automated harassment.

@brokenbottleboy Another reminder of how there's money to be made if an app could delete *your* number from *other people's* phones.

I don’t believe a woman would ever have designed this app. Anyone who has had to put up with street harassment and low-level disrespect wouldn’t want it seeping into their phone book.

It’s also far from the first app to try this trick. Remember Bang With Friends (now reborn as Down)?

Usually I wouldn’t even bother writing about an app with an idea this off base, but I think it really is a useful example.

It’s a product of a male-focused product design culture. On the surface, it sounds like it’s a simple solution to shyness, but the effect of Mutual if it succeeded – which it won’t – would be women (and many men) feeling irritated at their numbers being misused.

To give Product Hunt commenters fair credit, they also generally thought this was a dumb idea.

Just because you can build something, doesn’t mean you should. I’ve obviously emailed Mutual’s developer to get his response.

Update: The developer says – re: the harassment potential – that “it has certainly been carefully considered and is why the app only allows each phone number to receive a maximum of two messages (from two different users). After those two messages, the recipient will never be sent another text.” One might be enough to be honest.

Read next: Men on Tinder don’t listen to women – here’s some proof

Read next: 'Sesame Street' has a new home on HBO and is bringing us more Muppets!