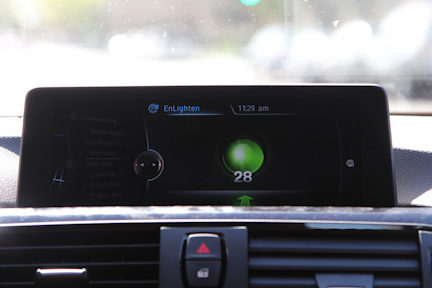 Anyone who drives knows the frustration of getting stuck at every red light on the one day that you’re running late.

But if you drive a BMW, you might be able to avoid that horrible scenario, thanks to the company’s latest integration.

The company has teamed up with the EnLighten app for iOS to help drivers time traffic signals through the BMW iDrive infotainment system.

The app shows drivers the status of the nearest traffic lights alongside a real-time prediction of when the light will change.

It works by linking up with the city’s traffic management system and combining its data with the cars location through GPS.

As well as predicting the traffic light changes, the app also analyzes the speed and position of the car to help drivers know if they have enough time to stop or cross an intersection safely, or when they should start to break.

At the moment, it’s only available to BMW drivers in Portland and Eugene, Oregon and Salt Lake City.

However, there is a standalone EnLighten app for iOS and Android drivers that won’t integrate with your non-BMW car, but it will give you the same details through your phone in Orgeon, Salt Lake City, Las Vegas, Walnut Creek and Arcadia in California and Christchurch, New Zealand.

Read next: Uncontrollable: How the first remote kidnapping from a driverless car could go down