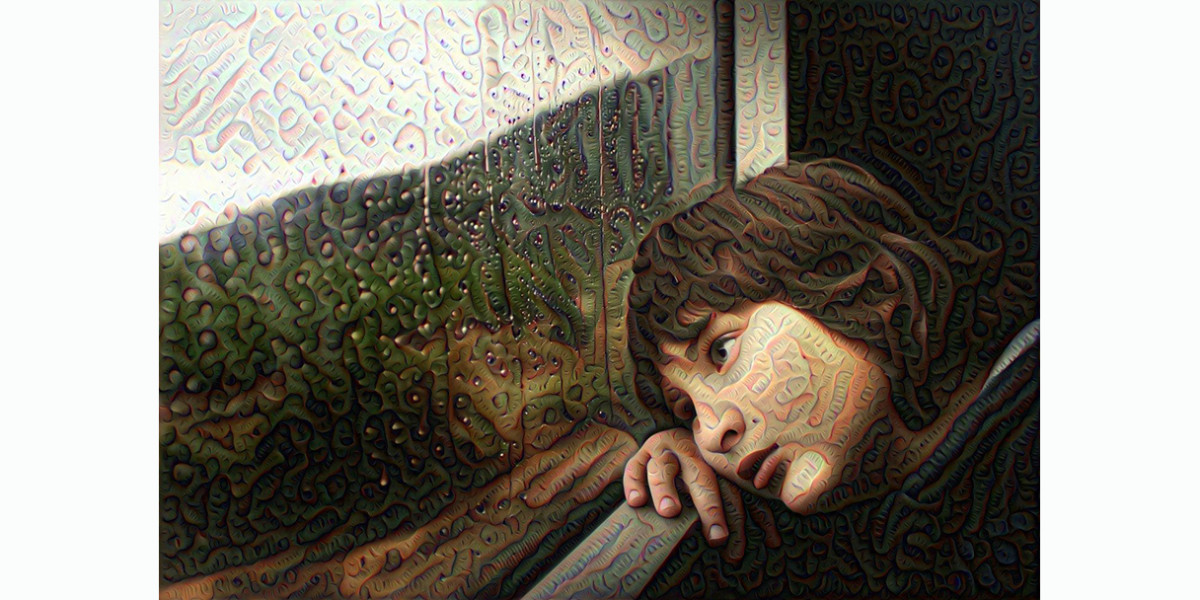 Dreams or nightmares? Sorry, I had to ask.

The question may seem unfair, and is not a reflection on the idea or the output generated by Deep Dreamer, a brand new app for the Mac launched into public beta today by Realmac — makers of RapidWeaver, Typed and other apps.

The real question is the underlying purpose of Deep Dreamer, and that’s where — aside from its rather bizarre visualizations — it all gets interesting.

Part of the reason is that Deep Dreamer isn’t merely a photo filter for non-conformists is that it’s built on newly open sourced Deepdream code from Google for research it is doing on neural networks and image processing.

Dan Counsell, CEO of Realmac was impressed by the artistic aspect of the Google output, but put off by the server processing. So he used Google’s code to create Deep Dreamer, a Mac app that would have a similar effect on images processed from your local hard drive.

The Realmac team did not stop there. In addition to imaging capabilities, Deep Dreamer also can output GIF animations and video, something that is not supported in the original Google source code.

The app is easy to use. Just drag an image into the window and use the default presets to alter its look — though that’s a rather mild description of what will happen to your photo or video. Presets include Impressionist Painting, Eyes, Animals and Tripping and a bunch of variations that add an even more hallucinatory quality to the output.

You can customize with the built-in sliders and pulldown menus, though in the end, it’s impossible to visualize what your picture will actually look like.

An adjustable slider lets you see the before and after image. However, unless you pay $15 for a license, you’ll only see an image preview.

Counsell, in his blog post introducing the app, warns that it’s rough around the edges. So be prepared for some slowness and the kicking up of fans. The blog post should prepare you for the time commitment, though I found some dreams did not take that long.

The processing of images and movies can be particularly resource intensive – especially when choosing to “Deep Dream” (that is: perform multiple processing sessions consecutively to an image. Deep Dreamer will process the image, and then take the output and process it again). You may want to consider leaving your Mac overnight to perform more intensive processing!

If you’re interested in creating some really unique visuals from your images, and fascinated by the prospect of watching the app pick out and formulate towers, pagodas, animal life, insects, and other items that were originally not part of your image — and don’t mind the wait — take Deep Dreamer beta for a spin.

You can purchase a license for the beta for $14.99. Once out of beta, it will cost $24.99. A Deep Dreamer Forum is available for sharing your creations and discussion.

Here’s some I tried out because I simply could not stop myself. 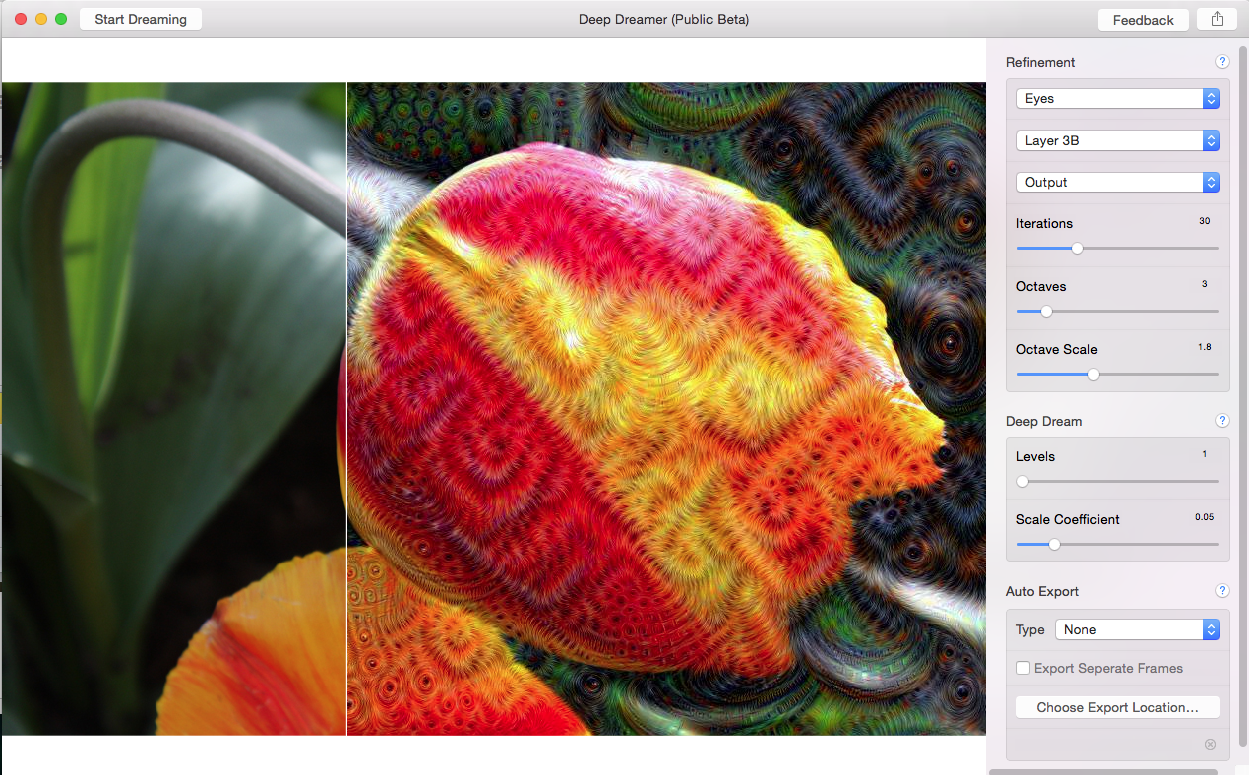 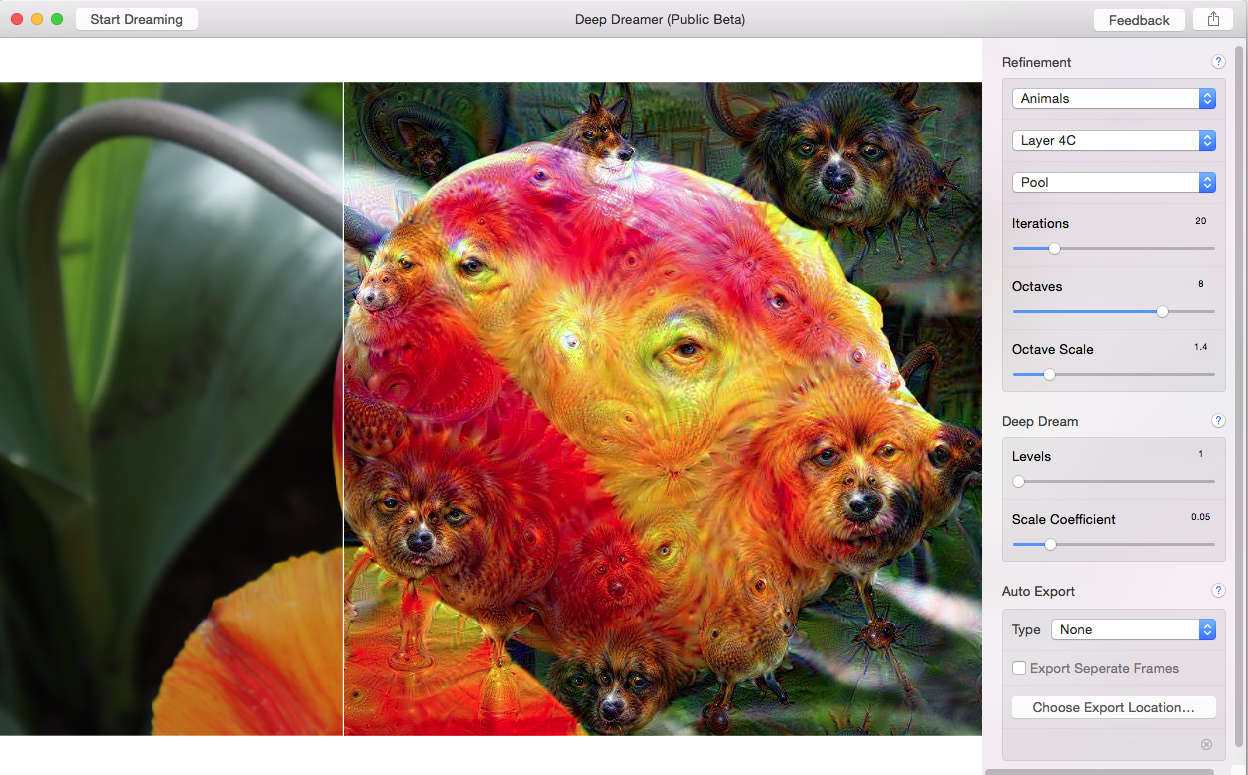 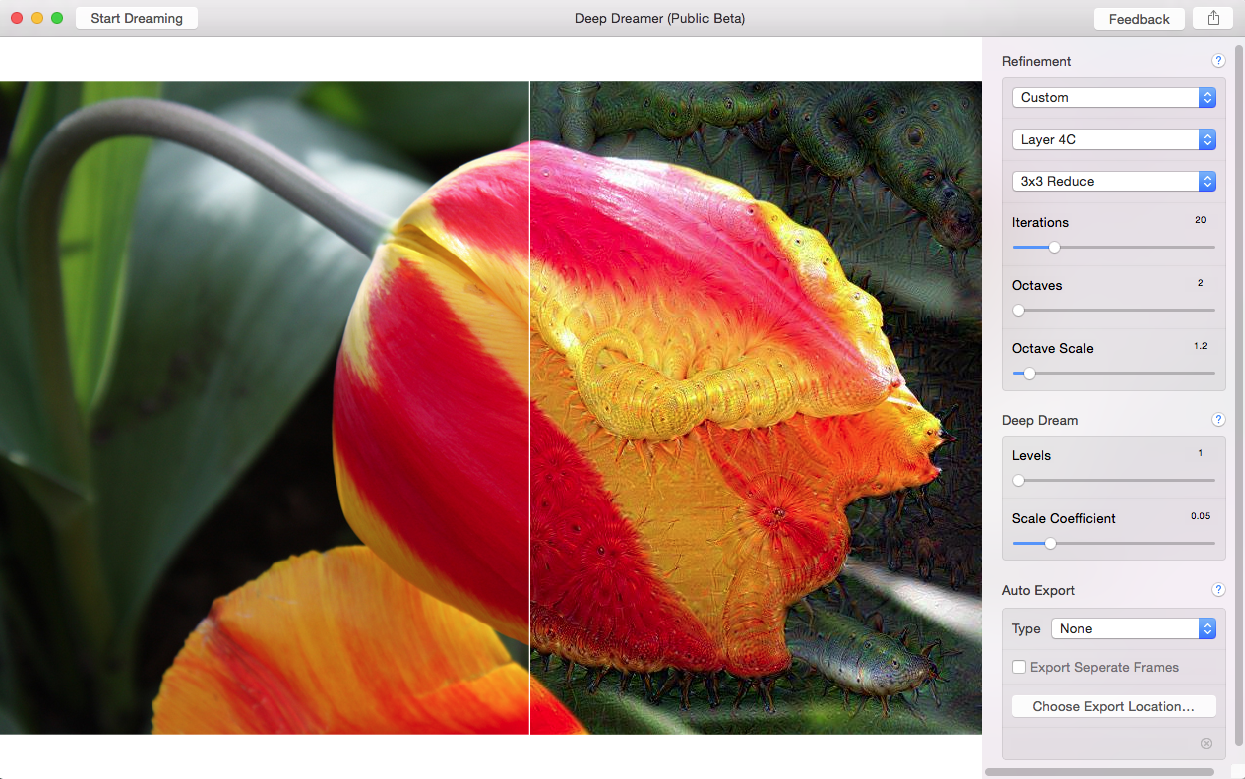 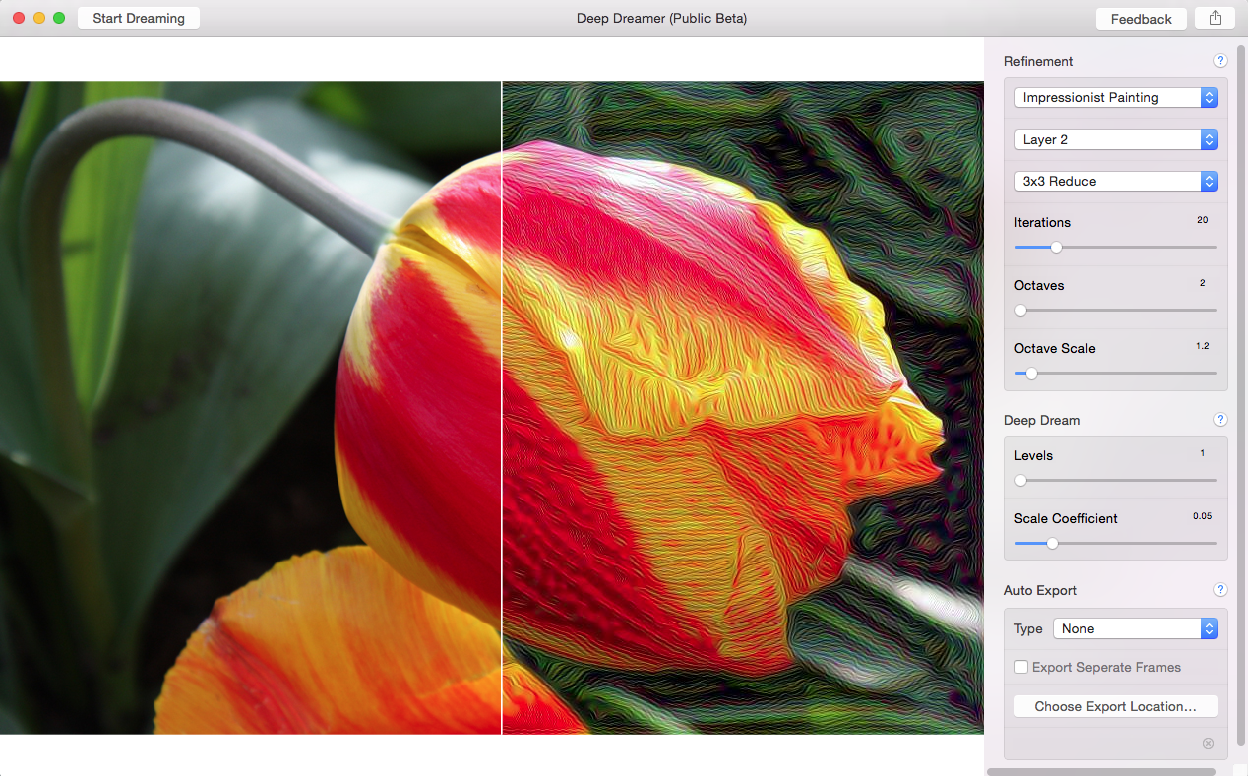 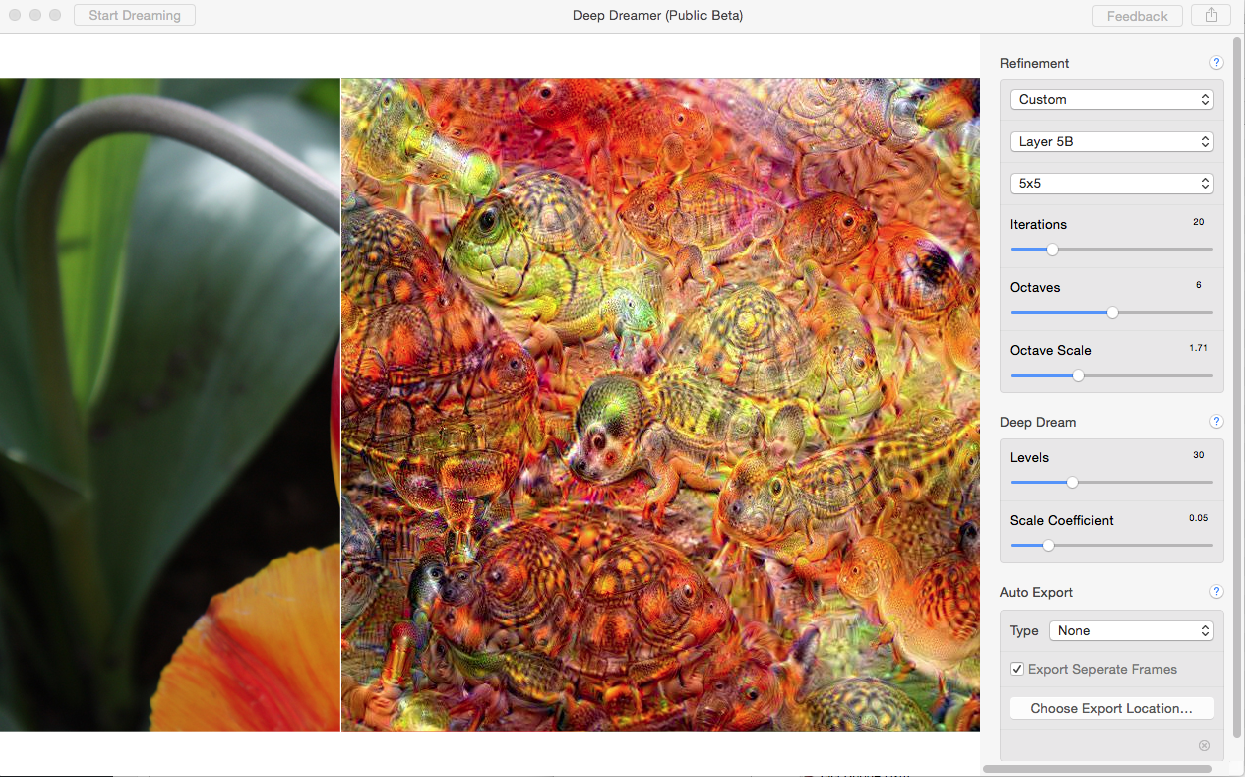 Read next: Verizon is the best carrier for connectivity in airports, says RootMetrics