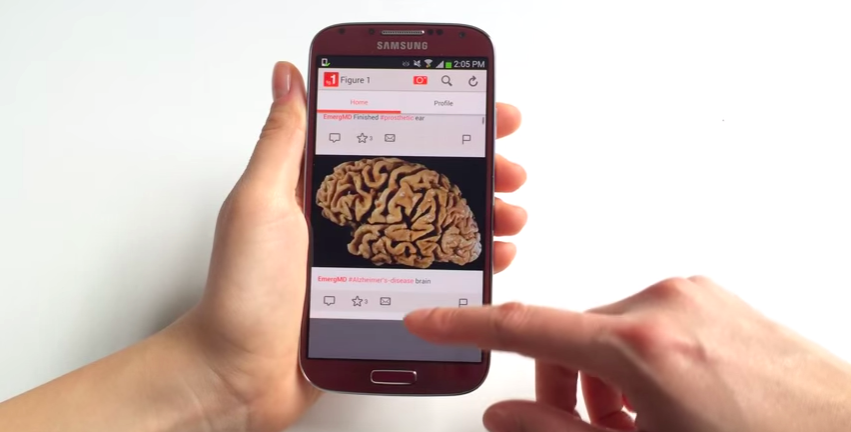 Being pegged as the ‘Instagram for Doctors’, Figure 1 for iOS and Android is a growing hit among medical professionals and lay people alike.

The photo-sharing network, aimed at health professionals, is free to download and lets health care workers upload photos, X-rays, scans, charts and other details of patients’ illnesses or maladies to get advice or pose questions on diagnoses and care.

Figure 1 gives workers in the medical industry instant access to clinical information from centers and hospitals all over the world, as well as the expertise and experience of the staff that goes with it.

Besides being able to post and view comments on images, professionals can use the recently added paging feature for cases that appear urgent.

It allows the professionals to page all relevant specialists by automatically sending an alert to their phones and also posting it publicly on the app so anyone else can chime in to offer advice.

While Figure 1 can be downloaded by anyone, the app requires health professionals to provide information so their medical licenses can be verified, or otherwise confirm that they are students in a medical field.

Photographs and images can’t be posted until all patient-identifiers (like tattoos, birthmarks, hospital wristbands, etc) have been blocked. The Figure 1 team check every image posted and will immediately remove anything that appears to allow identification of a patient.

Be warned though, Figure 1 is not for the squeamish or faint hearted.

It provides a fascinating glimpse at the level of mysterious illnesses and ailments that medical staff deal with every day. When you log on, you could see anything from unsightly growths to foreign objects in places that they shouldn’t be.

It also has its fair share of mundane posts about anything from swollen tonsils to alternatives to antibiotics.

I spoke to Fiachra Maguire, a medical student from Trinity College Dublin, about his experience with the app, which he primarily uses a a learning tool:

Often in medicine we’re required to learn about a broad range of diseases some of which are quite uncommon. Thus the ability for other healthcare professionals to share images of signs of disease in an easily accessible app has been of huge benefit for me. It represents a step forward from classical textbooks.

Taking a step away from medical education, the new paging feature opens up the emergency diagnoses side of the job. Speaking about it, Maguire said:

Most doctors will be very capable of diagnosing and treating the vast majority of conditions. But on occasions where they are stumped by a sign that they see (signs are physical manifestations of the disease; mostly visible to the eye), Figure 1 provides a new and modern approach to finding a diagnosis.

He goes on to explain that medical professionals often use the term ‘multi-disciplinary team approach’ for cases that require long term reviews or are particularly difficult. Figure 1 gives the team a new way of consulting on a broader level.

So far in his training, Maguire says he has found the app to be particularly useful for comparing and consulting the likes of rashes or chest X-rays.

I asked him about how the app has been received, in his experience, by more senior staff:

My own experience with older members of staff and adopting technology has been mixed. What I will say is that those who do use their iPhones and Androids use them quite frequently and regularly.

They acknowledge that it’s equal to having a huge library in your pocket, with Figure 1 as the medical images section.

If they don’t use the technology themselves, they’ve no hesitation asking younger members of staff or students to look stuff up for them on the spot.

Figure 1 is the latest app in a wave of medically-focused tech advances that are changing how doctors and patients interact.

CrowdMed is a similar service that lets patients submit their queries to a diverse group of doctors, nurses, nutritionists and other professionals who crowdsource a diagnosis. However, CrowdMed charges anything from $99 to $249, while Figure 1 remains free for now.

It will be interesting to see how the Toronto-based startup plans to monetize the app after its initial growth period.

In the meantime, it’s worth a gander if you’re a doctor, student or just have an eye for gruesome medical anomalies.

Read next: Sling's first TV ad features white kids who bully you into paying for 100+ channels