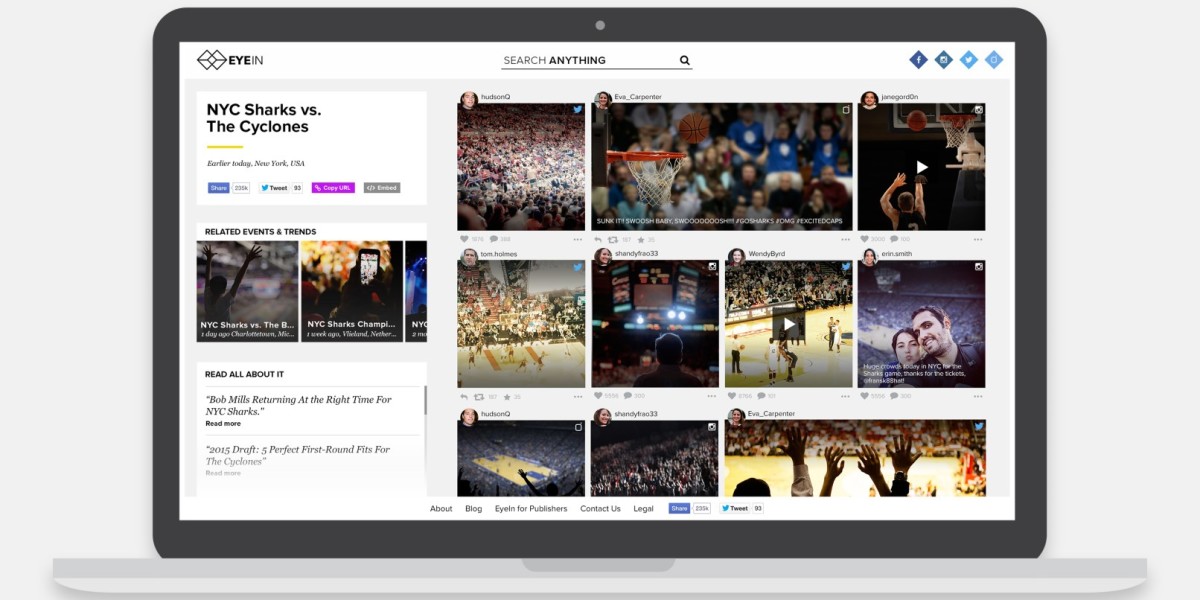 Imaging company Mobli has developed a visual search engine aimed at publishers, that combs social networks in real-time for the most relevant images and video to embed in their content.

EyeIn is smarter than your average image aggregator: it uses computer vision, natural language processing and machine learning technologies to analyze and categorize crowdsourced visual media, and surfaces the best pictures in a dynamic widget.

Let’s say you’re live-blogging a basketball game. EyeIn recognizes that a game is on between Cleveland Cavaliers and San Antonio Spurs, and pulls in pictures and video clips from Facebook, Instagram, Twitter and Mobli, the company’s own image-sharing app.

But that’s not all. The engine is smart enough to correctly categorize front-cam portraits of fans as selfies, and leaves them out of its consideration set — because that’s not what the game is about. Instead, it will display pictures of players, the venue and the crowd.

EyeIn can also analyze videos and is capable of skipping uneventful clips to surface only highlights.

The tool will come in handy for publishers who want to add genuine real-time visual media to their content without breaking a sweat. EyeIn is available as a free add-on; the company will soon introduce a monetization method based on a revenue-sharing model to benefit publishers.

EyeIn allows publishers to bring their readers an unprecedented level of real-time access to the events and trends that matter most to them and a degree of authenticity that can only come from a purely crowdsourced platform.

For other users, EyeIn is a powerful image search engine that gives them a close-up look at sporting, live entertainment and breaking news events from around the world, through pictures and videos crowdsourced in real-time.

Read next: Creative Commons is building a mobile app to kill stock photos