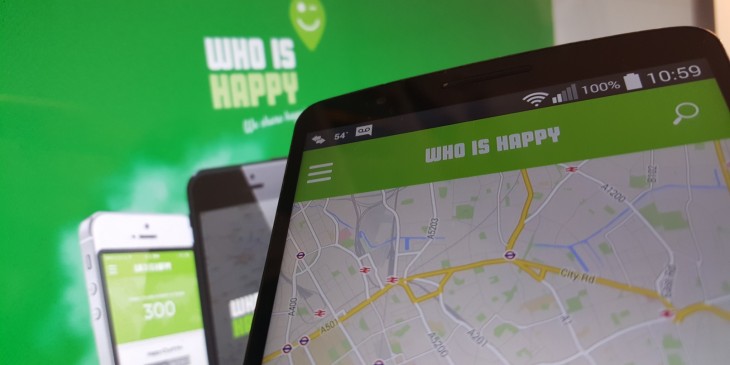 The move towards legalizing cannabis usage in various US states and other countries – or at least decriminalizing it – has led to the growth of a few niche services for ‘tokers’ and medicinal users of the little green leaf.

One such app, launching today in the US, is Who is Happy, which lets you broadcast your general location each time you smoke cannabis in a bid to show solidarity with other users around the world.

In essence, all it allows you to do is monitor your own ‘happiness’ statistics, and those of your country. You can also compare the rating to the ‘happiest’ countries ranking in the world. It’s a bit like Foursquare for smoking weed; just tap the icon to add your (general) location to the ‘happiness’ heat map.

Aside of the missing question mark in the name, there’s one glaring problem with Who is Happy for me: it offers little functionality worth having, but presents potential downsides.

For example, it may well be aimed at places where smoking cannabis isn’t illegal, but it certainly isn’t restricted only to those places – you’re free to use it anywhere else too.

Combine this with the option to log-in through Facebook, Google+ or via an email address, which you have to do if you want to track your own stats and I could see this going wrong and causing some problems for users in places where usage isn’t legal.

The company says “Don’t worry, no one will ever catch you! Your profile is invisible to others and your checkins are indicated by a radius of 1 kilometer on the map,” but given how often services are compromised, you’d have to really use the service in the assumption that all the data could become public one day. If your boss found out you smoke three joints every day, during working hours, would that cause problems for you? I imagine so.

Given the functionality the app offers users, there would definitely be a question mark for me over whether using it was worth that risk.