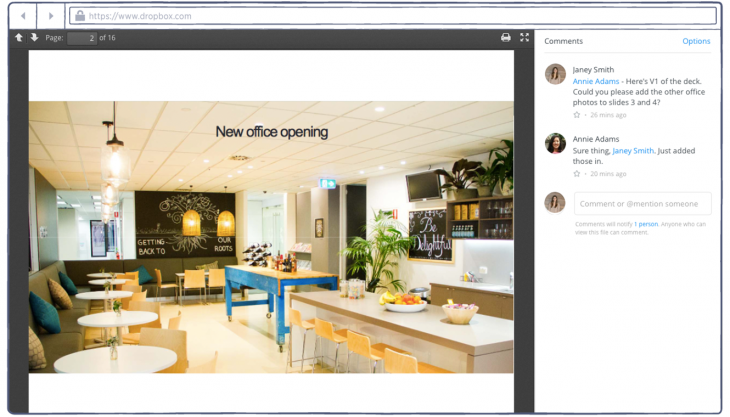 Dropbox has today announced that its Dropbox badge, which allows users to edit Office documents directly within Dropbox, is now being made available to all Dropbox for Business customers.

First launched at the end of last year for early access customers, the badge lets business users edit, update (to a newer version) or share a document directly from within Dropbox. The company first announced its partnership with Microsoft back in November last year. Dropbox said that nearly 13,000 business customers have already tested out the badge and that it has “helped them cut down on long email threads, multiple file versions, and having to jump from app to app.”

As the Dropbox badge feature moves out of early access, the company is launching a trial of a new commenting system that will fill that early access-only spot. The idea here is that by keeping comments together with the files they relate to – rather than buried in a series of email or IM conversations – it will be easier to suggest and implement feedback.

To leave a comment, you just need to click a shared link (or open a shared file of your own) and leave a note in the sidebar. Users can also @ mention someone (followed by their email address) to ensure they get email and mobile notifications for specific comments.

The new feature is only available via files opened in the browser or iOS app for now, but Android support is on the way.

Read next: Dropbox’s most-requested feature: The ability to sync folders outside of Dropbox, probably won’t happen

Read next: SXSW is about the gimmicks, not the brands