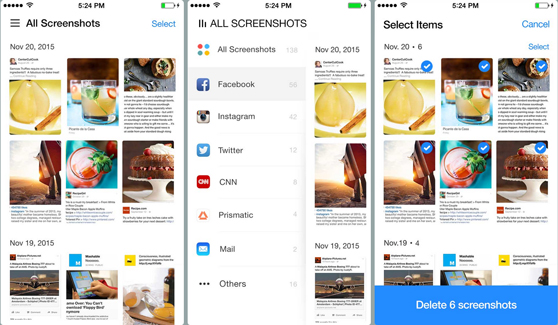 Screenshots, a new app from Landscape Mobile, uses smart technology to help you organize and share a particular kind of image — screenshots — on your iPhone. Screen captures are often meant as documentation, to save, store or extract information for personal use and sharing.

The idea behind the app is to view screens as images containing rich data, so the app employs automatic recognition, categorization and noise reduction to aid in discovering and preserving information within the image.

As mobile devices move toward ubiquity, users are increasingly relying on screenshots to record information and communicate across apps, but screenshots are easily disorganized and often contain extraneous information such as ads or hashtags. The Screenshots app aims to clean up such noise.

Using advanced image, search and OCR technology, Screenshots specifically captures images, text and links from several mobile apps to share or save to others and can connect to different networking platforms. You can extract images from an Instagram screen, for example, or a recipe text from iMessage.

“We know our users click a lot of Facebook posts and recipes, and apps like WhatsApp and Messenger so that’s how we prioritized. We don’t do a good job for everything yet,” said Yue Zhuge, co founder and CEO of Landscape Mobile.

Screenshots are automatically grouped by date and by popular social networking service. The app can extract the image and save a clean version to your album, reveal the URL and let you edit and clean up the text.

The app’s machine learning technology automatically identifies and classifies screens according to the their app of origin, notes the date, and provides a delete function. It also extracts the most important information — the core image, text and links. Users can edit, save or share a clean version of a screen with friends, as well as via Facebook, Evernote and Pinterest.

Of course, Screenshots’ usefulness depends on how you use image captures. The app does not work all that well with screens taken from just anywhere.

Instead the developer has prioritized the kinds of screens people are likely to take — such as from social networks or messaging apps, and has optimized the app for those first.

The machine learning technology helps to advance the app’s functionality over time as users accumulate more screens and dispose of them in specific ways. “It’s like search; we keep optimizing it and it gets better,” Zhuge said.