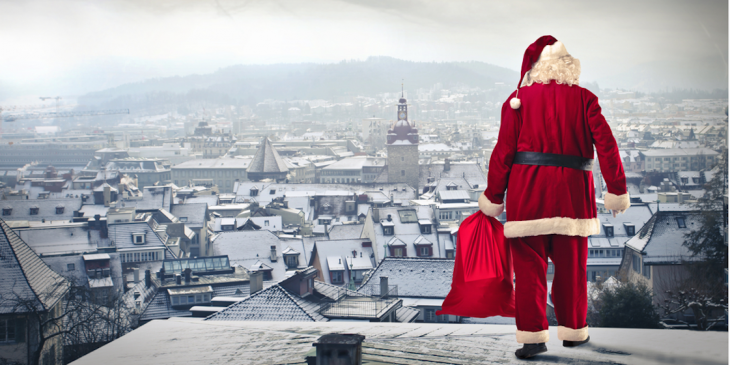 Father Christmas has begun his annual flight from the North Pole to deliver gifts to everyone on the Nice List but which Santa Tracker is best at following him as he makes his epic journey?

We’re monitoring the Google Santa Tracker and NORAD Tracks Santa, which has enlisted the help of Microsoft, to see which best keeps the best eye on Saint Nick on his travels.

Perhaps due to the magic qualities of Santa’s sleigh and his reindeers, the two trackers disagree on his route. Both conclude that the first stop of the year for Father Christmas was in Russia but Norad’s satellites say he started in Magadan while Google’s elves say he popped in to see the children of Provideniya first.

You’ll also find a difference in how Google and NORAD show you Santa’s flight. Google’s gone with a colourful cartoon representation of the great gift giver while Microsoft and NORAD show a more realistic looking avatar of him with his reindeer as they gallop across the sky.

Both Santa trackers have a running total of how many presents have been delivered so far. Eagled-eyed children might notice that Santa keeps delivering gifts as he passes over seas and oceans but there’s a simple explanation for that – seals, whales and other sea creatures get Christmas presents too!

If you’re on the move this Christmas Eve, you can keep track of Santa for free on your phone or tablet too. Google has a dedicated Santa Tracker app for Android while Norad and Microsoft have been even more festive and released apps for Android, iOS, Windows Phone and Windows 8. If you’ve got a Chromecast, you can view the Google Santa Tracker on your TV while NORAD’s also offering updates on Twitter.

NORAD has been tracking Santa for longer – it started keeping an eye on him in 1955 – while Google only began in 2004. Still, so far we think Google has the edge. It’ll tell you when Santa is about to arrive at a new destination and how long it takes him to deliver all his packages there. You also get the gift of short cartoon videos like the one below about his journey as he goes along.

Still, that’s not to say that NORAD’s not doing a great job following Father Christmas. It’s just that the Microsoft and the military folk there take their duties a little more seriously with a darker map and fewer festive additions.

If you want to be certain you know precisely when Santa Claus will be headed to your house, you might want to keep an eye on both Santa trackers throughout the day. We’ll be watching them too and updating this post with any further exciting Santa news as it arrives.

Update 1 (15.49 GMT): Both Google and Norad report that Santa is on his way though Indonesia. He’s just visited the most appropriately named spot on Earth – Christmas Island.

We note from the comments that Norad Tracks Santa is still the people’s favourite Santa Tracker.

Update 2 (15:53 GMT): Incidentally, Google estimates Santa’s delivered over 2.5 million presents already while Norad has him on a more conservative total of over 1.5 million.

Read next: Protect yourself from Sony-style hacks with these cyber security resources