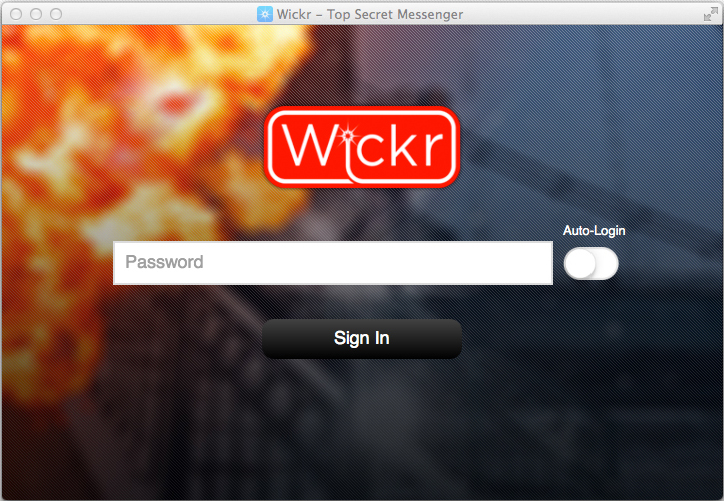 The Wickr mobile apps for iOS and Android are known for incredibly secure messaging that feature a self-destruct option for text, images and videos. Now those messages are available on your desktop.

The new Wickr app for Windows, Linux and OS X, is available today with the same security features found on the mobile apps. All the messages use multi-layer encryption with AES256 and ECDH521 and are never stored on any servers. The desktop app also removes all metadata and is completely anonymous, with only your devices having the key that can reveal messages directed at you.

In addition to being able to set a time limit for all individual messages (with a maximum of six days), you can “forensically” wipe the deleted messages from your computer. In other words, once it’s gone, it’s really gone.

Beyond all the security measures, the app lets you chat with 10 people at once, is ad free and Wickr doesn’t track you.

In a world where so-called anonymous secure services turn out to be anything but truly anonymous and storing data in the cloud is a gamble, Wickr boasts a $100,000 bounty for bugs that compromise its users’ data and routinely has security companies (PDF links) audit its apps and servers for compromises.

Wickr CEO Nico Sell sees the desktop version of the service as more than just expanding the platforms available for Wickr customers, “We’re trying to be the number one app you use on your phone and in order to do that, we need be wherever you are. The messages need to go where you go. It seems like an ironic move, but it’s still a mobile strategy.”

Sell also sees the desktop version of the app as the company’s first step to take over email. While current versions of the app have a six-day limit on messages, future updates will remove that limit. All messages would still live on your hardware instead of on servers.

Whether Wickr replaces your email in the future is yet to be seen, but for now, it’s a great way to chat securely with friends or family whether on your smartphone or desktop.

Read next: Socialbakers' new site is a treasure trove of social media data