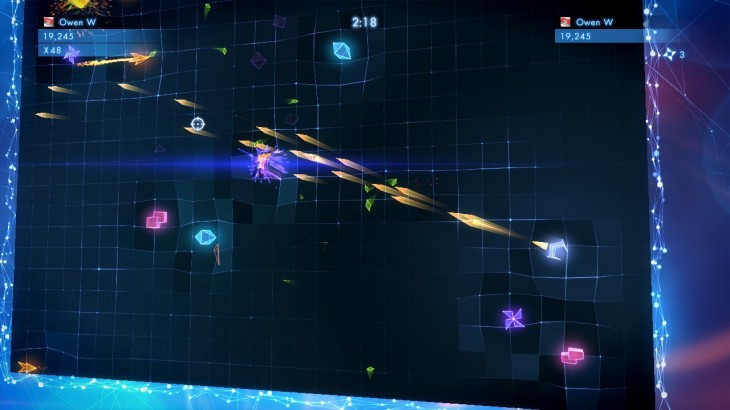 I loved Geometry Wars: Retro Evolved on the Xbox 360. It might be the game I’ve poured the most hours into out of everything I own. Something about its simplicity, soundtrack and non-stop gameplay is addictive.

Imagine my excitement when I discovered that after six years of waiting, there’s a new Geometry Wars game. The latest installment in the series, released today, updates the game with super-modern graphics, a new career mode and epic cross-platform support.

Geometry Wars 3 brings a new element to the game: 3D game boards. They’re visually stunning and incredibly trippy to play on, particularly when they’re a globe like above. It’s the same action-packed shooter fun from the old game, but the depth adds a whole new dimension to the gameplay. Bullets fly off around the globe maps and many of the enemies will come around the map to get you.

The 3D element does make it harder at times to keep up with what’s going on, but that’s always been the beautiful chaos of Geometry Wars. Sometimes there’s so much on the screen that it’s hard to keep up with, but that mayhem is totally addictive.

Story mode in Geometry Wars 3 adds a bit of variety to the game that was sorely needed in older versions. Geometry Wars 2 featured set game modes that were repetitive in nature, like sequence, a mode in which you had to fight to survive against increasingly large waves of enemies.

Those modes live on in the arcade area, so you can re-live the Retro Evolved goodness as much as you like. Career mode in Geometry Wars three is addictive, but a little repetitive. It runs on a star system, so you need to get a certain amount of points to win stars, which in turn unlock future levels.

This means you’ll ultimately end up grinding against the same level a few times to get the right amount of stars to keep progressing; it’s annoying, but nothing seasoned Geometry Wars players won’t be used to. Geometry Wars was always about grinding levels until you got better at the game, so there’s nothing really wrong with this approach.

Read next: 5 techniques (and extra tools) that will change the way you talk to your users