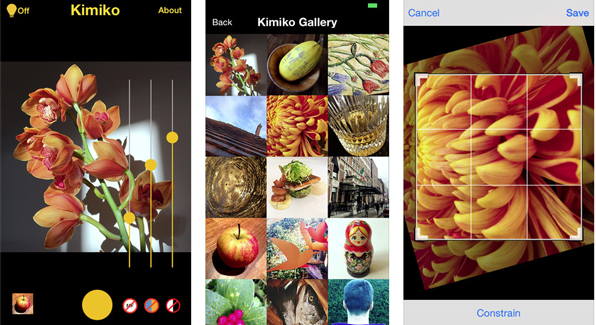 Kevin Abosch, the photographer behind the minimalist aesthetic of the Lenka black and white camera app, has heard the pleas of photographers who wanted something just like Lenka — except for color photos.

If you know how to use Lenka — and who does not know how to use Lenka? — then you already know how to use Kimiko. The interface is identical to Lenka’s, including the steady illumination button that toggles on or off — no flash, thank you. The subtle cool-warm tint in Lenka translates into a stronger color temperature slider in Kimiko — that is the only distinction.

With the mobile phone universe awash in photo shooting apps of various complexities, the black and white end of the spectrum had some catching up to do, and Lenka was an immediate hit, especially among professionals, when it was first released this summer. So it totally makes sense for the developer to make a color analog — like Curious Satellite’s Hueless and Huemore combo.

An app pair with the exact same interface and similar capabilities also trains users to seek out those apps every time they shoot, because they don’t have to think about how to use them. Both apps are strict cameras: you can’t go back into the camera roll to edit a previous photo.

Photos are saved into the app’s gallery and the Camera Roll. From within the app, you can access your Kimiko photos or crop, rotate, save and either share or export to social media including Instagram.

Kimiko’s default focus is automatic, with the familiar tap-to-focus, however the MF (Manual Focus) button and control slider let you dial in a more precise view.

Another slider controls color temperature, letting you to make a photo look cooler or warmer before you shoot. The contrast button lets you make adjustments via a control slider. Any control you don’t want to use can be shut off completely.

Exposure is automatic with the app’s proprietary real-time exposure management algorithm — shoot with the big yellow button or use the volume buttons to capture the shot.

Read next: OneOne is a new secure messaging app designed to make your chats untraceable (another app from Kevin Abosch, a man of many talents)

Read next: Get 24% off the Soundfreaq Pocket Kick speaker