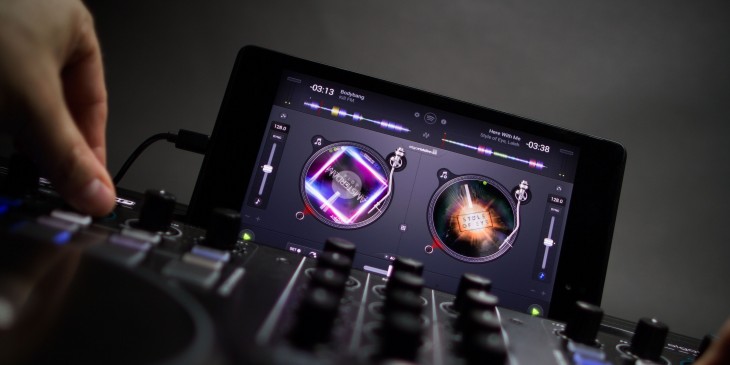 Algoriddim has catered for the iOS and Mac fraternity for years, serving up slick DJ-ing apps that not only let you mix your own digital arsenal of tunes but, as of a recent update, lets you access your Spotify library too. It even has an app to mix and mashup music videos.

Though the Munich, Germany-based company claims more than 15 million app downloads to date, it is as much about the hardware as it is the software. 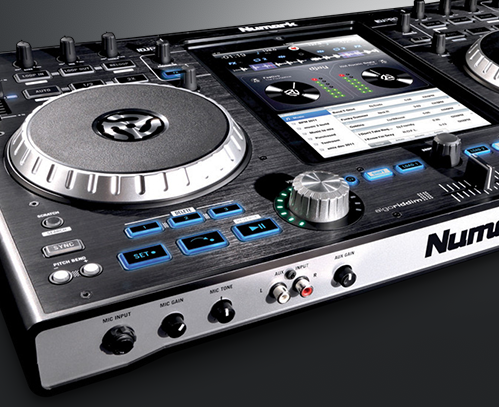 Algoriddim has previously partnered with a myriad of hardware manufacturers, including Numark, Casio and Philips, to develop co-branded controllers that work with Algoriddim’s Djay 2 app, seamlessly merging the worlds of digital music and physical mixing desks.

But today, Algoriddim is providing an answer to a question it has been plagued by more than any other over the past few years: “When are you coming to Android?”

DJs the world over rejoice – you can now spin your (virtual) wheels of steel directly from your Samsung Galaxy, Nexus, HTC, Motorola, Kindle Fire and all the rest. Djay 2 is now available to download from Google Play and the Amazon Appstore.

The decision to finally launch on Android was surely an easy one to make. It had cemented itself as one of the more accessible and affordable software solutions for DJs, but there was always this gaping hole in its platform armory.

From a scaling perspective, it was a no-brainer – Android claims at least half the mobile platform share in many of its key markets. But getting the app up to scratch was far from plain-sailing, as CEO and co-founder Karim Morsy explained to TNW ahead of today’s launch.

“It was a pretty big challenge to bring Djay to Android,” explains Morsy. “When we launched on iOS (in 2011), we took years of engineering that we had already created on the Mac, and it was seamless and easy to port over to iOS as it’s the same technologies and frameworks.”

Obviously, for Android, it’s a completely different system. It has required years of R&D from Algoriddim, revisiting the drawing board on numerous occasions while factoring in all those different devices, screen-sizes and resolutions.

“It was quite challenging, and we weren’t even sure if was feasible to bring a fully featured DJ app to Android,” Morsy muses. “We’re not building little apps, we’re building fully featured applications that enable people to be creative.”

While one might have assumed that Djay’s arrival for Android would be a limited affair for a handful of high-end models, that ain’t so. The app is launching with full feature-parity and support for all the common phones and tablets – budget or otherwise. You will require Android 4.1 and above though, while special design considerations have also been given to the upcoming Android L.

For lower-powered Android devices, Djay 2 uses a different algorithm that basically requires less RAM, hence why Algoriddim confidently claims to support hundreds of handsets. Though maybe not every, single last one of them.

It will also support Spotify, as with the iOS incarnation, which is a first for an Android DJ app. It basically means you can mix directly from the cloud – though you will require a Premium subscription for this.

Additionally, using ‘Match’, a featured powered by Spotify’s recent-acquisition The Echo Nest, you’ll be served with suggestions on what to play next based on what music is currently playing.

In many respects it would make sense for Algoriddim to connect with the likes of SoundCloud (just as Edjing does), given its popularity among the DJ-ing masses. But Morsy was coy about what platforms and third-party services it may or may not support in the future. He did suggest that exclusivity wasn’t part of its DNA, however.

“We always try to find the right partner in terms of user reach,” says Morsy. “Obviously we’ve been with iTunes for years. Music listening behavior and consumption behavior change over the years, so we adapt it [the app] to that. In terms of streaming services, Spotify has the best technology that we needed to stream two songs simultaneously, and apply effects in real-time. We just thought their technology is just cutting edge and is perfectly suited to this.”

So while Android users have waited a while for Algoriddim’s app, what you’re getting is a ground-up development that has been designed specifically for the platform.

“The graphics engine we had to completely rewrite – on Android there are so many different resolutions and it needs to be completely scalable,” says Morsy. “We developed a graphics system that automatically adjusts to the proportions, and we have some smart ways of figuring out how to reposition the different elements. It’s very challenging with a UI that replicates turntables, because it’s not like a table view that has wider cells and more rows, we have to think about things like ‘where does this button go’, and it was a lot of design work.”

Though there is pretty much feature parity with iPhone and iPad, there are some things unique to the Android app that aren’t possible on iOS.

For example, there is full MIDI controller integration, meaning the app can automatically launch when you hook it up to a physical DJ-ing console. On iOS, you have to manually launch the app – a small step, sure, but it can be the little things that make the difference.

Up next – We go hands-on with Djay 2 for Android to see what’s what, and whether it lives up to the hype.

On first inspection, the interface is pretty much identical to the iOS version. You have two blank slates to begin with (or ‘decks’ for want of a more apt metaphor).

Your fist move should be selecting which tunes you’d like to mix, and you do so by hitting the little musical note icon with ‘+’ symbol on it.

You can add music from your locally stored library or from your Spotify account. The menu here is also where you access your history and ‘queue’ for any songs you have lined up to play.

It’s worth noting here that the app works in both portrait and landscape mode. The former I find is better for scrolling my music collection, the latter is definitely more suited to mixing tunes as you can see both decks next to each other.

If you’re adept at beat-mixing, you can play around with each song, slowing it down and speeding it up accordingly. Or you can hit ‘Sync’, and it will bring the songs into line.

You can add in various sounds yourself, including kick drums, snare, hi-hat and cymbal.

Digging a little deeper, you can add effects such as echo, phaser and flanger to each track, while tweaking settings such as gain.

If you can’t be bothered with any of this and just want to close your eyes with a glass of Chianti, Automix mode lets you choose two of your favorite songs and Djay mixes everything for you.

You’ll also be pleased to know that you can record your mixes, but only ones that use your locally stored tunes – you can’t record from Spotify. There doesn’t seem to be an obvious way of exporting your recordings directly from the app, however, so you will have to use your file-manager to dig down and share the file from there.

With Algoriddim’s hitherto absence on Android, great alternatives have cropped up to fill the void. But with Spotify on board, and tight tie-ups with hardware manufacturers that let DJs sync their tunes with physical controllers, Algoriddim brings a compelling proposition to the table.

Though Algoriddim has a large footprint on iOS, with Morsy noting that he is a “hardcore iPhone user,” he adds that there have been many useful takeaways from the launch. “It’s an enriching experience to dive in to a whole new operating system, and world of app-creation and development,” he says. “We already have some great ideas which we think are going to make our iOS apps a lot better, just from some patterns and things we’ve experienced on Android. It’s a catalyst for both platforms.”

15 million users later, Algoriddim is gearing up to go from strength to strength, with an entirely untapped userbase as its disposal.

You can grab Djay 2 from Google Play and the Amazon Appstore now for a special introductory price of $2.99. No word yet on what the normal price will be, or when the promo period will end, but judging by the iOS incarnation, it will likely rise to $9.99 at some point. You will also need a little bit of space on your device to install this, as it weights in at 74MB.

Read next: How to correct a social media blunder