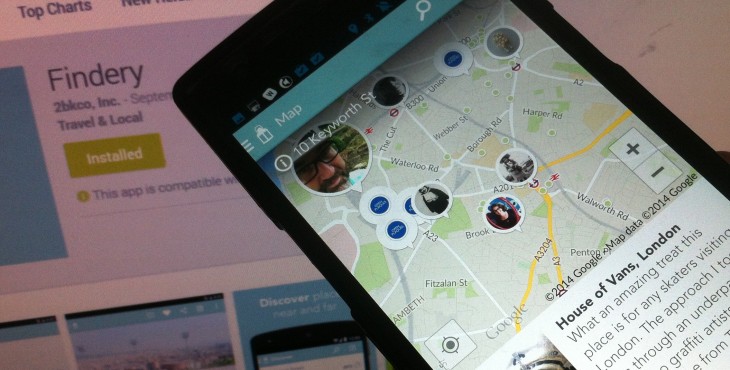 Back in March we brought you news on the Findery iPhone app, Flickr co-founder Caterina Fake‘s new social notes-based map of the world.

In a nutshell, Findery, which changed its name from Pinwheel in 2012 following a trademark dispute, lets you explore places through notes on a map, using video, audio, text and images. And from today, Findery is longer just available on iOS and the Web – it’s now available on Android too.

Findery could perhaps best be described as a user-generated travel guide, letting anyone add context to any random point on a map.

Without creating an account, you can browse your locale and see any geo-tagged notes nearby. As you can see here, David Bowie’s childhood home is not a million miles away from me, a fact I was hitherto unaware of.

It’s not restricted to your GPS location though, as you can peruse anywhere around the world and find what can often be very random points-of-interest.

Given this is user-generated content, you can surface personal anecdotes and fascinating tidbits related to a place, as well as local tips. It’s worth adding here, however, that notes can be made public or private, so that only those you’re friends with and ‘follow’ can see the messages (if you wish).

If you wish to contribute yourself, you’ll have to set up an account, which is quick and easy, and you can leave notes anywhere your roam around the world. This will also let you save your favorite locations to your profile to revisit later.

In addition to notes, users can build ‘Notemaps’ – curated collections of notes about a specific topic, theme or location. So this can be like a crowdsourced notepad, and include a list of things ‘to-do’ in a specific region from various users.

Findery basically began as a blank canvas, and has handed things over to the community to color with content. It’s certainly a well-designed, useful service.

Caterina Fake co-founded popular photo-hosting platform Flickr with Stewart Butterfield in 2004, before being acquired by Yahoo a year later. They both left the internet giant in 2008, and Fake then went on to launch Hunch, but this was seemingly discontinued fairly recently.

Findery says that its users have posted notes in 196 countries around the world.

Read next: How to make your blog more Twitter-friendly