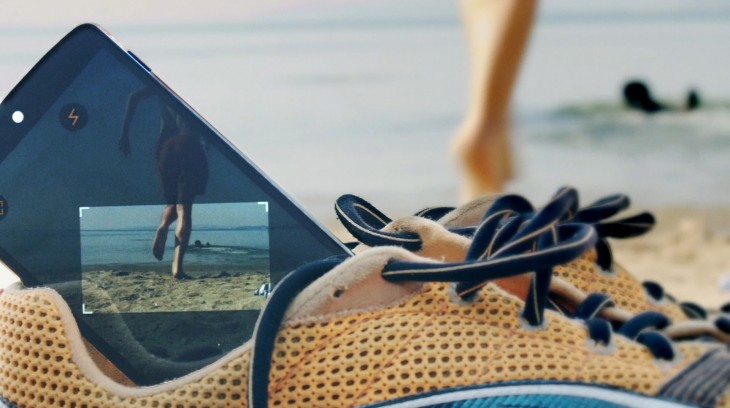 Back in January we brought you news on Horizon, a neat new iPhone app that essentially means no more vertical videos. And today, it’s launching for Android users too.

While shooting a video in vertical mode is fine if you intend to play it back on your phone, any plans involving watching later on your big-screen TV will end in disaster. Yes, those infamous black bars that frame many home-made YouTube skits are all the result of vertical capture.

Horizon lets you shoot horizontal videos regardless of how you hold your device. You can rotate the camera from vertical to horizontal and back again, and the aspect ratio remains the same. How does it do this? It’s all thanks to your device’s gyroscope, which auto-levels the video to ensure it remains constant.

Here’s a quick peek under the hood of Horizon for Android.

With your phone in the vertical position, Horizon shows you how it will actually be displayed with a little landscape box. As you swivel your phone, the box remains in the landscape orientation.

Horizon comes equipped with three straightening modes, including Flex, which serves up a flexible frame-size enabled by tilt-to-zoom. This adjusts the zooming scale when you tilt your device, to make things look a little smoother.

The result, when you play it back, should look as though it was shot in landscape to the casual observer. Of course, this doesn’t flawlessly replicate actual ‘landscape’ as the cropping of the top/bottom of the image and the subseqent ‘zooming’ affects the quality of the shot, but it does a decent job and it is pretty clever stuff all the same.

Here, you can see a comparison of Landscape vs. Portrait, shot with the Horizon for Android app.

‘Rotate’ mode gives you a fixed frame-size, which may work find for some shots such as outdoors panoramas, but given it remains at a fixed ‘zoom’, it might not be suitable for all situations. Then there’s ‘Locked’ which doesn’t correct anything and will make Horizon just like any normal camera app.

Additionally, you can choose from three Video Quality options – VGA (640×480), HD (1280×720) and Full HD (1920×1080) – to manage video quality and thus save yourself memory space. Helpfully, the videos are stored to your main DCIM folder, making them accessible to other apps too.

You can record videos with both the front or back camera, which is a smart move given the rise of the selfie, even if this is a video-focused app.

Horizon is free to use, and lets you record 15 seconds with the Horizon logo embedded in the video. You can unlock unlimited recording, priority customer support, removal of the Horizon logo and access to future features within the app for a pretty reasonable $0.99.

Many ‘complaints’ with Horizon for iPhone were that if someone is sufficiently aware of ‘vertical video syndrome’ to download this app, then they can simply adjust the device to shoot in landscape. And that is a fair point.

However, there is also a reason why many people elect to shoot in portrait mode – it’s a more natural way of holding a device. This is particularly relevant in an age of ever-growing smartphones, which effectively requires you to hold your phone with two hands to shoot in landscape. Horizon, at least, goes some way towards remedying this by letting you hold your phone in portrait.

To use the app, your device will require a gyroscope and an accelerometer, and you’ll need Android 4.3+.

Horizon is available to download now on Google Play and the Amazon Appstore.

Related read: How to shoot, edit and publish videos from your Android smartphone

Read next: Fleksy flexes its iOS 8 muscles as the keyboard app arrives for iPhone and iPad