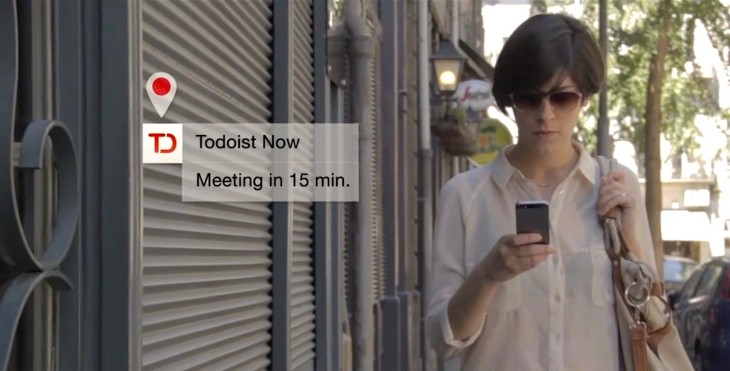 Todoist is introducing an interesting update to its task-management apps for iOS today, one that alerts users of an item on their to-do list when they arrive at a specific location. The Android version will get the same update in the next couple of days.

While other apps, including Todo, have previously enabled users to set up location-aware reminders, Todoist claims this is the first time such a feature has been introduced to a task-manager on both iOS and Android. At any rate, rather than waiting for a specific time on a specific day to come around to remind you of something, you can now be notified when entering OR leaving a specific place.

For example, if you need to pick up some new running shoes on the way home from work, you can now activate a reminder for when you leave the office, or for when you pass the shopping mall.

Via integrations with Google Maps and Apple Maps, a list of your favorite places will automatically appear with options ready to select, while you can manually add new locations to your list by searching in the maps. It’s worth adding here that location alerts will only be available to Premium subscribers, which costs $28.99 per year.

Launched way back in 2007, the perennially popular productivity platform has rolled out a series of iterations over the past few years, introducing an all-new Todoist built using HTML5, while taking its first foray into native mobile apps in late 2012. It has been steadily rolling out new features and products ever since. Last month, Todoist launched a business-specific service, replete with an enterprise-focused feature-set.

Location-based alerts are definitely a neat addition, and one that should prove popular among Todoist’s throng of users.

Read next: The bare minimum skills required to work for yourself in a creative field