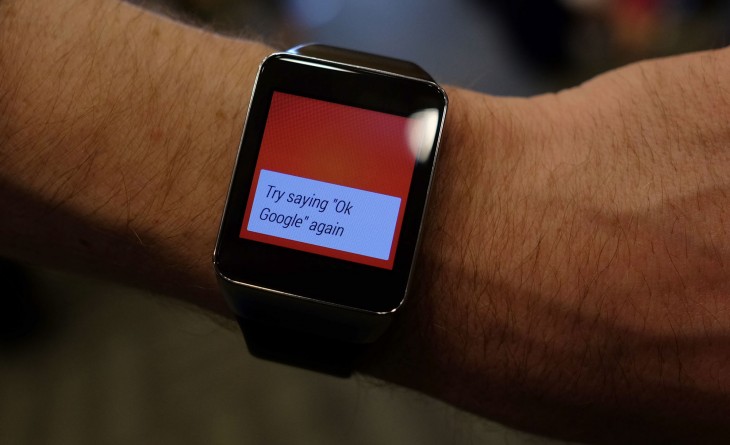 Ahead of actually getting a review unit for the new Samsung Gear Live, I was able to grab a few moments with the latest smartwatch from the electronics giant at Google I/O. Running Android Wear, the watch’s OS is still in its infancy, but the form factor is not only comfortable, it looks good.

The watch doesn’t have the tell-tale face bulge of previous generations of smartwatches. It’s not as thin as a regular watch, but the design is such that it flows into the band. The metal edge around the face isn’t garish and adds a slight bit of flair to the watch that the flat-black LG G Watch doesn’t have.

On my wrist it was surprisingly comfortable. The plastic band and watch are hug your wrist without pinching or feeling top heavy. It felt comfortable enough to wear all day. After trying multiple smartwatches over the years and being disappointed by how uncomfortable they were, it’s refreshing to find something that doesn’t make you cringe at the aesthetic or feel like you’re wearing a piece of lead.

Android Wear felt a little sluggish during taps and swipes, but the watch I tried was running in retail demo mode, so we’ll have to wait until tomorrow to fully test that. The screen was bright, but after years of high LPI displays, it can get a bit getting used to have a lower resolution screen on your body.

It’s nice to see Samsung finally create a smartwatch that might actually be worth buying. We’ll have a full review of the watch soon. Until then, the watch is available for pre-order today in the Google Play Store for $299 at 4PM PT and will ship on July 7.

Read Next: Everything at Google I/O and Hands on with the Moto 360: It’s as beautiful as promised and All the News Coming out of Google I/O

Read next: Here are 6 of the first third-party Android Wear apps