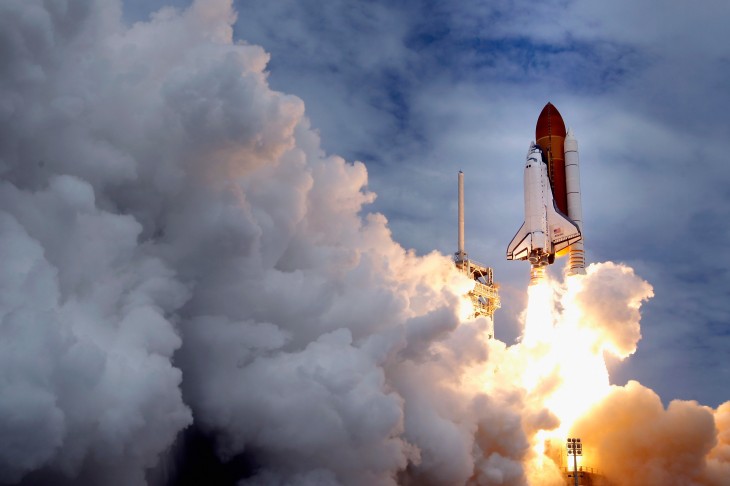 Space never ceases to amaze. Humanity has been trying to understand the Solar System and the wider universe for decades, and yet there’s still an awful lot of unanswered questions and mysteries just waiting to be solved.

Keeping up with the latest discoveries and official space programs is no easy task – especially if science wasn’t your strongest subject at school, or you’d call yourself a casual stargazer at best. What follows is our top 10 iOS apps for learning and enjoying the wonders of space. Perfect for dedicated astronomers, Trekkies and curious minds alike.

For many, the National Aeronautics and Space Administration (NASA) will always be synonymous with mankind’s efforts to explore the Solar System. NASA’s official iOS app covers ongoing missions and space programs, as well as the latest photos captured by its various satellites and crack-team of astronauts working on the International Space Station.

The app’s design is a little ropy, but the sheer wealth of information on offer more than makes up for it. Whether it’s news, videos or a map showing the nearest NASA space center, it’s the detail that makes this a must-have app for stargazers and space exploration enthusiasts everywhere.

These high-resolution images are supplied by the Jet Propulsion Laboratory, a NASA-owned space center specializing in the creation and operation of robotic spacecraft. The app doesn’t offer very many features, but its photo library is filled with unique, mesmerizing and downright stunning imagery.

The interface is basic and at times archaic (a total redesign wouldn’t go amiss) but the raw, unedited content shines through regardless. There’s also the option to rate, ‘like’ and share images from within the app, which is handy for sharing some of this content with friends and peers.

Extrasolar planets are rather mysterious entities, as they exist outside the Solar System where humankind is yet to venture. The Exoplanet app uses a GitHub database containing all discovered extrasolar planets to serve up information on over 889 of these natural wonders.

Swiping up and down the database can be a little daunting, but a search bar and filtering system helps to break down this otherwise insurmountable treasure trove of information. Each entry includes the name of the planet, some trivia and animated diagrams explaining all kinds of useful information, such as its size in comparison to the planets in the Solar System.

Spotting a satellite can be incredibly tricky. They’re not the most noticeable machines and they’re forever moving around the Earth’s orbit. GoSatWatch is a satellite tracker for the iPad, iPhone and iPod touch, offering a real-time view of pretty much everything slowly traversing the night sky.

It serves up notifications whenever a particular satellite comes into view – such as the International Space Station – and there’s a handy timetable for keeping track of upcoming passes in the weeks and months ahead. The filtering system is crucial though; switch on everything and you’ll be bombarded with hundreds of rather uninteresting satellites, blocking out the entire screen.

Gazing up at the night sky, it takes just a few moments before I’m wondering what the nearest constellations, planets and moons are called. That’s where Pocket Universe steps in. The app’s ‘Virtual Sky’ mode uses the iPhone’s built-in GPS and gyroscope to show an accurate map of the stars above.

Points of interest are shown in real-time, with the option to bring up further facts and figures about a particular planet’s properties, internal structure or history. The user can also scroll forwards and backwards in time, search for specific objects and jump to another preset location.

Pretty self-explanatory, this one. The app lets users recreate galaxy collisions on a whim, with different multi-touch swipes used to rotate, zoom, shift and pause. The controls take a little bit of time to get used to, but just watching the natural phenomena occur over and over again is pretty mesmerizing.

Dive into the settings and users will also find some options for upping the number of galaxies involved, as well as the playback speed and environment. We recommend choosing five galaxies and setting the playback speed to super slo-mo. Let the demolition commence.

An incredibly detailed and intricate map of the Solar System, scaled down to fit in your pocket. Pinch to zoom, swipe around and select points of interest with a single tap. It’s one of the most polished apps on our list and also one of the most useful: each planet offers figures and interesting trivia, as well as a breakdown of its internal structure.

The app also offers some detailed 3D models of man-made satellites including Curiosity, the International Space Station (ISS) and the Hubble telescope.

The moon just doesn’t get enough credit. It’s the closest object to our own fair Earth and is almost always visible at night, regardless of where you are in the world and the ever-changing weather conditions.

Moon Globe is a dedication to our sole orbiting companion, serving up a 3D representation that users can spin around, pinch to zoom, and generally poke until their heart’s content. The menu at the bottom overlays various nuggets of wisdom such as the names of each region, where probes and space shuttles have landed in the past, as well as the position of its poles.

Is the Sun more your cup of tea? TNW recommends: Solar Monitor

NASA officially ended its Space Shuttle program on August 31, 2011. The 30-year initiative produced some of the most historical space exploration moments of all time, and there’s really no better time to look back on some of its achievements.

The app includes a database covering everyone that ever flew on the Space Shuttle, with detailed entries listing their missions and full NASA biography. Users can jump to specific missions based on the year the Shuttle launched, and even snap a photo to see how they would look in a space suit.

Okay, so this isn’t a ‘true’ space app. There are plenty of video games to choose from with a dash of space opera or some sci-fi flair – XCOM: Enemy Unknown, Dead Space and Mass Effect Infiltrator to name but a few. Angry Birds Space is pretty special though.

Yes, it’s another outing for Rovio and its gang of brightly colored birds, but the creative gravity-based puzzles ensure that this is one of the best outings in the series to date. Also, there’s a bird that looks like Slash. What more could you ask for, really?

Read next: Emojify for iPhone transforms your photo pixels into ASCII-style emoji art