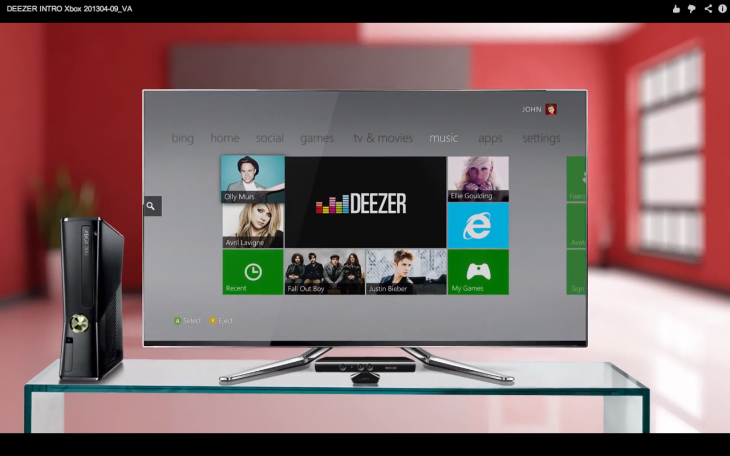 It’s less than 24 hours until we find out what Microsoft’s next video game console is, but that doesn’t mean the Xbox 360 has been relegated to the scrap-heap. On-demand music streaming service Deezer announced its first app for the system today, giving users a new way to discover and listen to music.

The interface will feel familiar to anyone that has used the current iteration of the Xbox Music or Last.fm app. The main interface uses a large menu bar along the top of the screen, denoting the usual key sections such as Search, My Music and Radio.

A mini-player sits at the very bottom, displaying the artist and track name, running time and cover art, alongside four colored buttons that convey the functionality of the traditional Xbox 360 controller.

The center of the screen uses a large grid to show the various options and selections available to the listener. Deezer has done this as part of a conscious effort to support Kinect, the peripheral from Microsoft that enables motion controls and voice-commands, because it makes it easier to selecting various options with the hand. It’s a novel way of navigating the various menus and is clearly geared towards social settings, such as a house party or family gathering.

The large targets are therefore welcome, and are bolstered by the usual array of colorful album artwork. As with Last.fm, Deezer is pushing its curated radio stations in a big way. Users can simply select a particular music genre, and the app will quickly create an endless playlist of suitable artists and tracks.

Expanding the audio player shows a list of tracks down the right-hand side of the screen, contrasted with the cover art and playback controls on the left. It’s not particularly innovative, or visual compared to Last.fm’s latest update, but the interface looks clean and intuitive.

The Xbox 360 app also supports up to three Deezer accounts. Only one Xbox 360 account needs to be signed in from the dashboard, but the Connection tab along the top of the screen offers a quick means of switching between users. The functionality should give listeners easier access to personal playlists and preferences, without having to exit the app or tinker with the Xbox 360’s settings.

Deezer is available to European Xbox 360 owners right now, although listeners will need a Premium+ subscription, priced at £9.99 per month, to gain access to unlimited streaming. It’s the same strategy deployed by Microsoft with its Xbox Music service, whereby users are encouraged to pay for wider device access and functionality.

For Deezer, launching an app on the Xbox 360 should improve its brand awareness and also show that it’s serious about catering for a wide range of hardware. It follows a Windows 8 app launched last month which again competes with Microsoft’s own Xbox Music service, as well as the likes of Nokia Music+.

Read next: Flickr, once a poster child for the freemium model, is now all about ad revenue