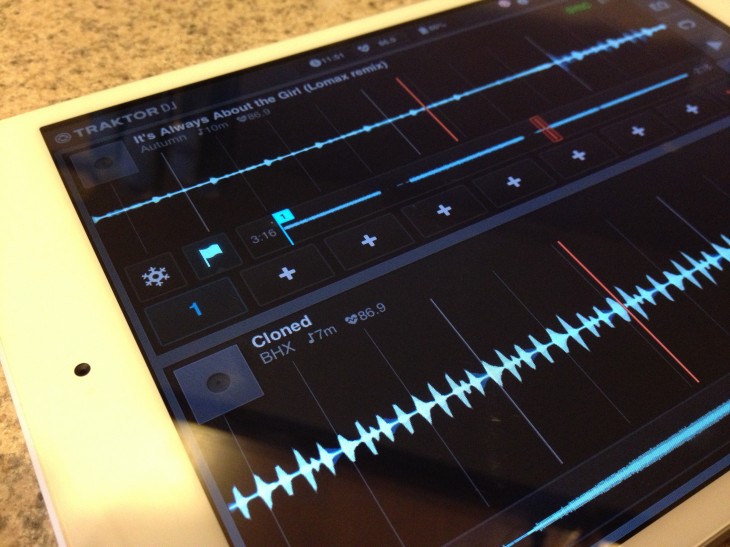 There has been no shortage of DJ applications for the iPad. From Algoriddim’s djay to offerings like iDJ from Numark, companies have gotten many things right. But we’ve yet to see true, fully-featured applications that can stand up to the rigors of what a pro or even serious hobbyist will want to use. Native Instruments (NI) is hoping to change that with the introduction of Traktor DJ for the iPad.

If you’re familiar with Traktor, then Traktor DJ is going to look and feel very familiar. In fact, it’s feature identical in most of the ways that will make any difference to you. The areas where it strays from the traditional Traktor software are concessions to the touchscreen interface, and they’re done exceptionally well.

First thing’s first  — This isn’t an app that’s relegated to being a “neat idea” or a “toy”. It is, in fact, a fully-capable app that you can feel just as at home using on your couch as in the club. NI has done some very interesting things with other parts of its hardware line to make this possible, and we’ll get into those details soon. For now, let’s look at what Traktor DJ has to offer.

You’ll open the app to find two empty decks. Music for Traktor DJ is pulled from your iTunes library. You can create playlists if you so choose, or just add tracks manually.

Once the tracks are loaded, the basic interface of Traktor DJ is exactly like that of Traktor. You have two tracks, with overview and playing sections. You have track information on both, and the ability to sync the tracks according to their beat grid so that you can mix them without having to manually adjust their tempo.

Each track has an effects and equalization section that you can access by just tapping the buttons. Doing so will bring up a touch-based interface that operates on an X and Y axis. Once you have the sound that you like, you can lock it in place.

There’s a crossfader between the two tracks, but you can control the volume of each on its own if you so choose. Though I’ll definitely say that it’s more difficult than it would be with a physical mixer, it’s good to know that such granular control is still possible in the app.

Speaking of granular control, one of the most prominent parts of Traktor has always been its ability to do on the fly looping. This remains true with Traktor DJ, and in fact I like it better than I do in the desktop apps. Traktor DJ supports pinch-to-zoom, and pinching your fingers together will give you a larger overview of the track. Once you have a good view, you can tap an area between two fingers to create a loop.

Cue points are also a joy to use inside of the app. As you can see in the image above, I’ve added one on a track that had an unusual amount of noise at the beginning. You can have up to 8 cue points assigned on any track, and you can choose to sync them via Dropbox so that they can be loaded into your desktop version of Traktor if you so choose.

The biggest feature, to me, is a new feature called Freeze Mode. Clicking the snowflake on the display will chop up the track that you’re playing into individual beats, while continuing to play the track. Tapping a beat works like a sample hot button, allowing you to chop and rework a track on the fly. When you’re done, just press the snowflake again and your track resumes as it was before.

That function raises a question — Is this a companion app, or standalone product? The answer, in my opinion is both. While almost any DJ worth their salt won’t go do a live show with an iPad app at this juncture, there’s a lot to be said for having an app on your iPad that you can use to create set lists, adjust cue points and the rest. It really is a strong companion app.

But there’s a hidden magic behind what NI has done with Traktor DJ as well, and that’s hidden behind that speaker icon in the top right:

The “Split Output” option allows you to use a standard headphone splitter, then have one side as a cute and the other as the master output. Pretty nifty stuff, but that’s still not the entire story.

Going Pro with the iPad?

No, you’re not going to go play a live gig with a headphone splitter being your only sound output. Native Instruments understands this fact and has utilized Apple’s own Camera Connection Kit to turn the iPad into something more than just a home for a companion app. Via the kit, you can hook your iPad into one of NI’s spectacular Audio series USB sound cards and have full control from within the Traktor DJ app.

Scoff all you want at the idea of walking into a gig with a sound card and an iPad, but it wasn’t all too long ago that we were laughing at the ideas that became Traktor, Serato and all the rest of the digital vinyl systems. The iPad, with its integration of touch, brings back that tactile response that so many of us miss desperately. No, it doesn’t feel like a record. Nothing will. But there’s definitely a lot to be said for controlling music with your fingertips instead of a mouse click or buttons on a MIDI pad.

Priced at $20, it’s in line with many other music apps that are available on the App Store. This one just happens to be better than most.

Read next: Have you ever wanted to watch all six Star Wars movies at once?