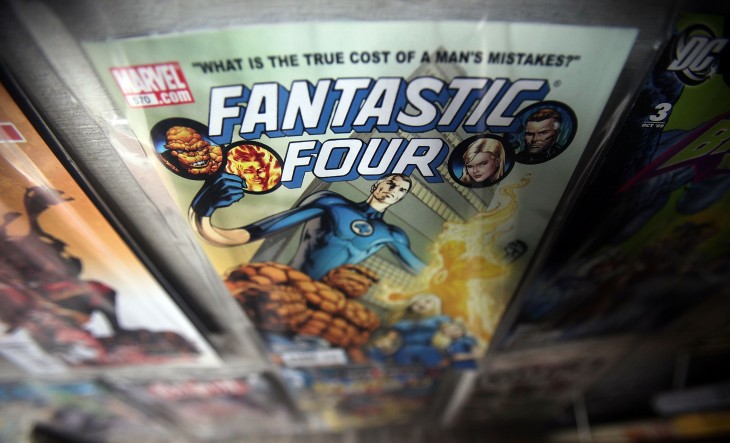 The app is an extension of Marvel Digital Comics Unlimited, an on-demand, subscription-based service similar to what Netflix is for movies or Rdio for music. Once you’ve signed in with your account, the app has two horizontal lists showing new releases from the last seven days and the most popular comics being read that week.

Each available issue is represented by the cover of the comic, as well as the number of the original print issue, when it was released and the artists involved. Tapping on a cover brings up a short synopsis of the issue, as well as the option to read it immediately or add it to your offline library.

If you don’t fancy shelling out for a subscription – it’s currently $59.98 for an annual subscription, or about $5 per month when purchased online – there’s also a free option available from a button in the top left-hand corner of the home screen.

The subsequent screen has a surprisingly large number of issues to explore, filtered by what’s free to read for the current week and month. Although it’s a great way of trying out the interface and getting a feel for how it all works, the free access isn’t really a viable option if you want to browse or follow an entire series.

This is because the available issues are a curated selection, meaning that even if they feature the same character – at least three issues of Captain America are available at launch, for example – they’re all from issues published in different years, from different series and drawn by different artists.

The reading experience is, for the most part, pretty intuitive though. Swiping back and forth moves between the pages, while pinch-to-zoom is invaluable for homing in on individual panels. In our tests all of the text was razor sharp, and the colors were represented beautifully on the iPhone’s screen.

A slider on the bottom can be used to quickly forwards or backwards through the issue, and there’s also a button in the bottom right-hand corner to switch between one of three viewing modes; 1-Page, 2-Page and Smart Panels.

The first two operate just as you would expect, replicating the look and feel of a physical comic book. 2-Page panels are particularly important for stitching together pages that were designed to work together as a single spread.

Smart Panels, however, shows each tile one at a time, in theory removing the need to constantly zoom in and out. In portrait mode it makes very little difference, but if you’re holding your iPad or iPhone in landscape, it can help to automatically readjust each panel as you read.

One of the biggest drawbacks to Marvel Unlimited is that it can only save six comics at a time in the library. For offline playback that’s a big problem, as many comic enthusiasts will be hoping to download an entire volume, collection or weekly release before they go on holiday or somewhere without a stable Internet connection.

Gizmodo has noted that the app has access to 13,000 back issues in total, although at the moment these are all at least six months old.

Again, that’s a big problem for users looking to stay up to date with their favourite series. Just like with any other form of entertainment, fans don’t like to wait around in order to get their fix of the latest movie, TV show episode or album. Differences in release dates is ultimately what leads to piracy, so if Marvel is to make any headway with this service, it’ll need to drastically tighten this gap in availability.

The app is available right now if you search for it in the App Store now, and Marvel has been cited as saying an Android version is coming “soon”.

Read next: TNW Pick of the Day: Takes for iOS turns your photos into actual moving images