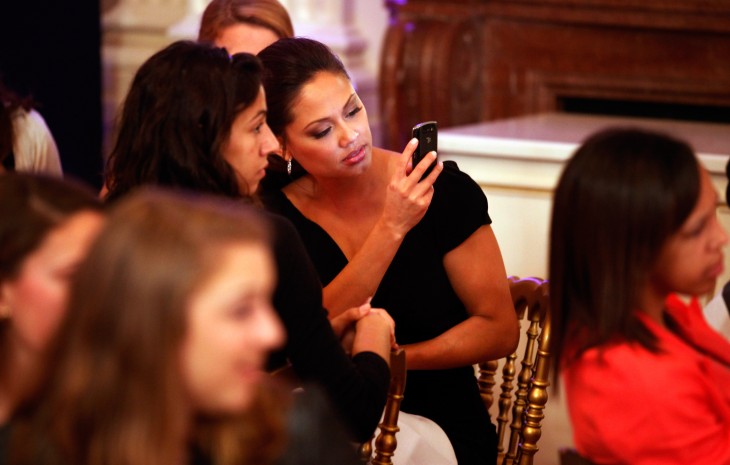 Social video sharing service Viddy has released an app update for iOS devices that it says will make it easier for people to create, beautify, share and discover videos. Included are a host of new features, but users are probably more interested in the fact that it now records 30-second clips, twice as much more than before. In addition, Viddy 2.0 comes with stop-motion capturing, better video editing controls, new filters and soundtracks, and more.

What’s interesting about this update is that Viddy hopes it will reinvigorate its service in the wake of recent turmoil and stalled growth, along with increasing competition.

JJ Aguhob, co-founder and president of Viddy says that the social mobile video space is still in its infancy. While that may be, it has become rather crowded with services like Vyclone, Socialcam, Montaj, and now Vine trying to stake their claim on dominating the industry. But in order to stand out, companies will need to come up with something big and notable. Aguhob says that for Viddy, it spent two years learning how people created and shared videos and that has helped shape the release today.

Viddy says that this new update hopefully will help create a more personalized experience that enables people to “easily discover videos based on their interests and location.”

Much longer, more color, and maybe even better looking 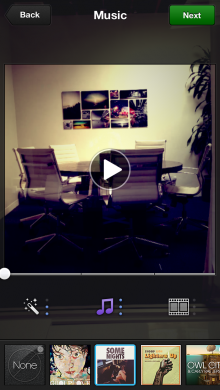 Today, when users download the latest version onto their iPhone, iPad, or iPod device, they’ll be able to record much longer videos and combine them with eight new audio tracks to use as soundtracks from popular artists such as Snoop Lion, fun, Grouplove, and the Lighthouse and the Whaler, complete with real-time previewing.

Additionally, just like one might experience with Socialcam, users can apply filters to their videos. This release offers 15 new filters ranging from “vintage” to “sepia” to “x-pro” and live rendering as video is captured.

More control over your videos 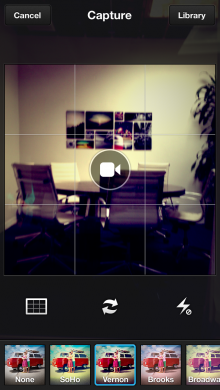 Pulling a bit out of Montaj and Vine’s playbook, Viddy now gives users the ability to pause and resume as they film. The raw, unedited video can be up to 2 minutes in length. Users then can stitch clips together almost like they were in a studio Cutting Room floor and piece together a finished product that’s 30 seconds long.

Viddy says that its new release also comes equipped with a stop-motion-capture simulation. It has a toggle-based frame rate adjustment setting, which gives users the ability to control how many frames per second are recorded: 6, 12, or 30 seconds. Think “The California Raisins” or the “Wallace & Gromit” videos.

In addition to the litany of updates, Viddy 2.0 comes with an updated interface that has a “socially relevant feed” that displays content based on affinities and preferences. Simplified video descriptions with hashtags, mentions, and links are now supported, as well as geo-location to help find videos by region and position. It also contains swipe-based navigation giving faster access to entertaining videos and people. 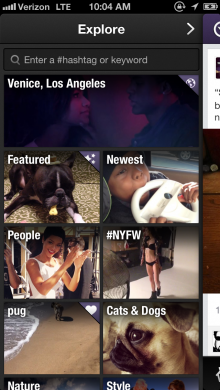 The service has also added a new Explore section that contains curated video categories and trending hashtags — so if you’re looking for videos from an event, like South by Southwest, you’ll be able to check to see all Viddy videos that came from it.

And since Viddy is filled with celebrities and other personalities, it has also implemented a user verification process. That way, when you come across someone who claims to be Bill Cosby, Mark Zuckerberg, Shakira, Jay-Z, Will Smith, or any other celebrity, you’ll know whether it’s the real deal or not.

It’s not all good news for Viddy

While some might think that the release of an update to its iOS app is great, it’s important to remember that it hasn’t exactly been smooth sailing for the company.

Just two days ago, TechCrunch reported that the company cut its staff by more than a third. It’s said that the staff reduction came about after the company’s CEO and co-founder Brett O’Brien left. There are those who think that O’Brien’s departure was in order to make room for someone with “more experience”. Maybe it was the former CEO’s actions in declining Twitter’s alleged offer that was said to be valued around $100 million that did him in.

A Viddy spokesperson told TechCrunch at the time:

As the board continues to review Viddy’s business, we’ve identified specific ways to streamline costs which include eliminating some positions. These changes will allow the Viddy team to be focused on bringing the most innovative and engaging social mobile video product to market. Viddy has a strong balance sheet and an exciting product roadmap ahead, including an upcoming new product release, and we have the right team in place to execute moving forward.

Of course last fall, Twitter announced it acquired Vine. It’s in the same space as Viddy and has similar features — it’s on a fixed video length (6 seconds), but it’s much simpler and doesn’t allow users to apply filters, songs or audio tracks.

It’s traffic appears to have been declining as well. Wired compiled a graph of Viddy’s daily unique visitors and it shows that after the service raised $30 million from NEA, Goldman Sachs, Khosla Ventures, and Battery Ventures last May, traffic has been in the decline.

Most of the traffic was supposed to be through Facebook’s Open Graph, but because of changes made to Facebook’s algorithm, fewer people wound up discovering the app.

Here’s hoping that the launch of Viddy 2.0 will help bring the company back into its former glory when it was the number two free iOS app and has more than 6.5 million users.

While Viddy does have an Android version, which was released last December, this new set of updates is only available for iOS devices.

Read next: Google launches Google Play Books in India, but there's no movie or music content for now