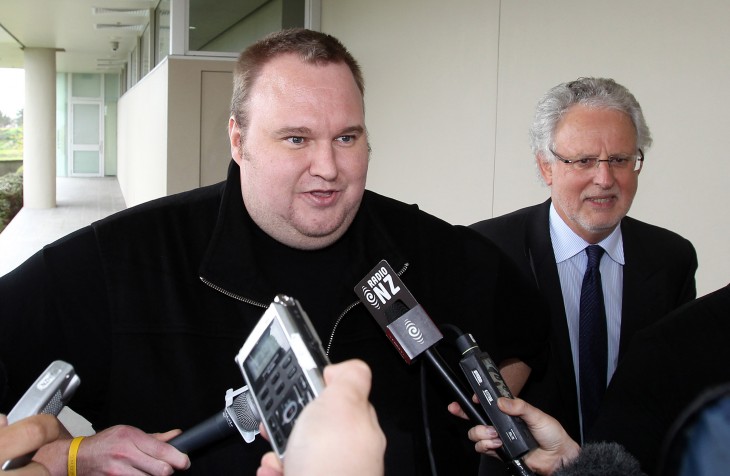 Ever since the raid on Kim Dotcom’s house last year for allegedly harboring piracy through megaupload.com, the larger than life internet mogul hasn’t given up. He’s repetitively stated that this wouldn’t be the last we see of him and of Megaupload, and now he’s back, and Mega is better than ever.

Mega launches tomorrow morning on the anniversary of the police raids on the Dotcom mansion in 2011, at 6:48 AM on January 20 NZT. Dotcom has a large press event planned for this evening that he promises will be “like no other” – we aren’t entirely sure what that means, but we’ll be there covering it as it unfolds.

The new Mega comes into the world with many eyes closely watching, since the US extradition case against Dotcom doesn’t actually start until August of this year. The big play with Mega is that it’s an entirely secure online storage box for your files – the site generates a 2048-bit RSA key that is required for access to your files, otherwise, they’re not accessible.

Before you get started, there’s a gotcha. You can only use Google Chrome with Mega. The company says it’s adding support for other browsers but “to unleash Mega’s full potential you should use Google Chrome.”

When you register to the new Mega, it doesn’t ask for any specific details about you other than your email address and name. It’s literally a ten second sign up process, then you’re in. Once you’ve confirmed that your email address is indeed real, you are required to move your mouse around the screen and bash the keyboard a little to add some random data to the key that the site generates for you.

Once you’ve done that, you’re in! That’s it. No payment, no crazy advertising to speak of (yet?), just a simple, clean interface that is the new Mega. If you’ve ever used Dropbox before, it’s not dissimilar. You’ve got a nice shiny “Cloud Drive” to store your files in, a couple of upload buttons and that’s it.

It’s clear that the team behind Mega are going for simplicity this time around – the interface is nothing like that of Megaupload when it was taken down at the beginning of 2011. Mega is clean, simple and easy.

It’s very straightforward to upload files. Just pick a folder or specific files and they upload quickly to the site and appear in real time. No refreshing, it just works. There’s also a Windows / Mac application coming in the near future so that you can just place files into a folder on your PC and they’ll be uploaded to your Mega Drive automatically.

The most interesting part, though, comes when you share a file. You click the link button on the right, and a box asks you what details you want to share with people. If you select the file without the key and you share the link with people, you’ll need to share the key in some other “secure” channel. Mega themselves say that “MEGA’s cryptographic security model depends on the confidentiality of the keys displayed above. Avoid transmitting them through insecure channels.”

It wouldn’t make sense to not provide the channel to communicate the keys with other users, so Mega has an included ‘secure messaging’ component that lets you send messages to other users of the service. We couldn’t get it going in our testing, so it might be still under construction.

Of course, you can always share the encryption key as part of the URL, which makes it much more convenient for sharing  pictures online with your friends. Doing that just makes it a one step process.

When you sign up, you’re automatically placed on the free plan which gives you 50GB of storage. There are paid plans, though, and they’re extremely generous when you compare them to cloud storage competitors like Dropbox and Skydrive. Even just the tier one plan is 9.99 Euros per month, and gives the user a whopping 500GB of storage and 1TB of bandwidth. There’s no competition here, Mega gives you a ton of cloud storage for very little money.

There’s a catch – you can’t buy the service direct from Mega. You have to buy a prepaid code from one of their resellers to get a pro account. It’s not clear if they’ll accept a credit card directly in the future, but for now, this is the only option.

The final thing to talk about here is the promised “app ecosystem” that Mega wants third party developers to create. They’ve opened up an API for access for developers and even their resellers are promising an “app ecosystem” on their purchase pages. There’s an extensive API already in place, time will tell if developers actually want to use it.

Right now, Mega is still a barebones file sharing service, but the company has massive plans for the future. Snooping around on their site reveals their plans for going much further than just file sharing. A post on their blog — dated January 18th — details the features that were cut from launch but will be added soon. There are also apps for mobile platforms already underway, with the company planning to support all major platforms in the near future and allow uploading from them.

The blog details a secure email component (probably the part we can’t get working) that will be added, secure instant messaging and the ability for non-Mega users to send large files to those with a Mega account (for example, for printing files at a print shop). It doesn’t stop there, though, the company also says they’re planning on-site word processing, calendar and spreadsheet applications (watch out, Google Docs!) as well as a Dropbox-esque client for Windows, Linux and Mac.

They also say that there are plans in the works for allowing users to run Mega as an appliance on their own machine, though there aren’t many details on that in the post. In another place on the site, Mega promises that in the near future they will be offering secure video calling and traditional calling as well. Talk about trying to take over the world.

From a look around the site one can tell that Mega is doing all it can to protect itself from being liable for files that its users upload. The help center has a section that answers a number of questions; one of which being “Is Mega Legal?” The company says that “To the best of our knowledge, cloud storage and encryption are legal. Please comply with applicable laws and regulations on how you use cloud storage and encryption as well as our terms of use.”

There’s also warnings when you share a file. The company warns:

Copyright warning: MEGA respects the copyrights of others and requires that users of the MEGA cloud service comply with the laws of copyright. You are strictly prohibited from using the MEGA cloud service to infringe copyrights. You may not upload, download, store, share, display, stream, distribute, e-mail, link to, transmit or otherwise make available any files, data, or content that infringes any copyright or other proprietary rights of any person or entity.

They want it to be known that they are just as liable as any cloud hosting provider would be for having pirated files in their storage lockers. Their stance, as with many others is: “it’s not our fault, it’s the users’ responsibility”. They’ve even got their infringement reporting page up already.

Aside from copyright, there are some gems in the help center such as “Why would you base a cloud service in New Zealand of all places?” Mega answers “Among other important reasons, New Zealand’s native Māori name is “Aotearoa”, which means “Land of the long white cloud.“” Well played.

It’s clear that Kim Dotcom and the Mega team have large ambitions for Mega, with their plans to move not only into the email space but also the calling and document space too but are taking their time and getting it right. Dotcom has delivered on his promise of a secure version of Megaupload, but it remains to be seen if the market will embrace it with open arms again.

Mega is open to the public from tomorrow, so when it opens up, go and try it out for yourself. Heed this warning though: if you lose your password there is no way to recover it, due to the inherent security risk that would bring with it.

We’ll have more on the story later tomorrow at the press event and behind the scenes with Kim Dotcom himself.

Read next: Uber reduces prices by 10% and opens cheaper UBERx service to all in San Francisco starting January 21