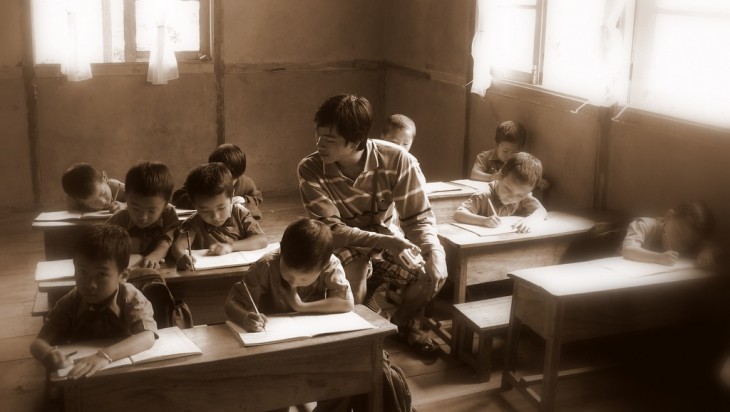 If you have a penchant for learning at home or on the move, 2012 saw a slew of handy apps that could help you in your endeavors.

Indeed, The Next Web covered thousands of apps throughout this year, from nifty new browser extensions, to the latest game-changing Android and iOS apps, so we sifted through the archives and pulled out some of best educational apps of 2012…just for you.

IBM Think is an iPad and Android tablet app that charts the evolution of technology.

Inspired by centuries of scientific innovation, IBM Think sets out to show how early tools have evolved into the modern technological masterpieces we see today.

Languages is a fast and lovely offline translation dictionary app for iOS.

The main app interface is a bookshelf with language dictionaries on it. You then tap a dictionary to download it to your device, at which point it becomes available both online and offline.

It has a clean, beautiful interface featuring a minimum amount of buttons on any given screen (max is 2). Instead of just typing a query and getting the results (which you can do), you’re also able to browse the entire dictionary word-by-word. This ensures context, so you always know where you are in the larger scheme of things, and can quickly bounce from one word to another without losing your way.

DailyArt delivers one piece of classic art to your iOS or Android device each day.

DailyArt is your daily dose of classic paintings, serving up a proverbial shot of espresso to awaken the inner culture vulture in you, however fleeting this may be.

Each day you receive a push notification with a classic art piece – open it, read a little background information around the artist and painting, and then go back to uploading random photos of your coffee mug to Instagram. If that’s what you normally do, of course.

Wikiweb is a beautiful Wikipedia app that lets you visualize connections between articles.

The iOS app’s main selling point is as a Wikipedia reader that not only serves up the usual content crowdsourced from willing bodies around the world, but it also visualizes the connections between articles.

You can explore any Wikipedia article, and you’ll be issued with articles containing gorgeous, beautifully presented typeset. But the presentation is only part of the appeal here. It lets you discover interesting articles through connections you may not have initially expected.

Atlas by Collins is a beautiful and immersive way to explore Earth, letting users explore the world through a collection of interactive 3D globes, displaying visual data about this planet we call home.

Coming in at a rather punchy $9.99 (£6.99), this 620Mb monster will likely deter a lot of people from downloading it, especially those with limited space on their iOS device.

But moving beyond these minor (?) points, what we have on our hands here is a beautiful, immersive app that’s likely to appeal to people of all ages. Collins partnered with London development agency The Other Media to produce this app, a company also responsible for Wonders of the Universe (see below).

Wonders of the Universe

Wonders of the Universe is an iPad app that packs in a custom 3D rendering engine, tons of video, text and image content from Professor Brian Cox’s Wonders series, accompanied by a brand new interface that works like nothing else you’ve seen from an ‘interactive book’ before.

Our universe is rendered in stunning visual detail out from clouds of galaxies down to the subatomic building blocks of life.

➤ Wonders of the Universe | iPhone/iPad

ClassDojo secured $1.6m in seed funding back in August, just as its student behaviour-improvement Web platform rolled out of beta.

Through the app, teachers create a free account, add their students’ names and customize the behaviors they want to encourage. During class, positive behavior is reinforced by dishing out feedback points to students, using any computer, tablet or smartphone; these feedback points are displayed in real-time in the classroom with audio-visual cues.

ClassDojo’s iOS app launched a month after the initial Web app, also helping teachers bring order to their classrooms, and is designed for all mobile Apple devices.

With its built-in pitch-detection tool, you simply play along to your computer’s microphone and the app tells you whether your guitar’s in tune, and also whether the note you’re playing is the right one for the song.

There are eight different courses at the time of writing, from absolute beginner all the way up to 12-bar blues.

Wikipedia may have been one of the Web’s most recognizable brands for years, but it sure took its time to roll out an official Android app.

An iOS app has been available since 2009, so it wasn’t entirely clear why it took more than two years to hit Android. In January this year it finally launched on Google’s mobile OS, and we must say it is actually a very nice app.

The Clean Dictionary is a great way to search for the spellings and meanings of words without being bombarded by annoying advertisements.

Jimmy Wales may be the well-known ‘face’ of Wikipedia, but he also has a lesser-known co-founder called Larry Sanger, who left the crowdsourced encyclopedia project shortly after it launched. And after nearly a year of development, Sanger released a neat new online learning tool aimed squarely at kids, called Reading Bear, which is a “systematic phonics tutorial.”

Reading Bear sells itself as “the first free reading site online that takes students systematically through all — not just a selection — of the main phonics principles, using innovative multimedia presentations.”

In a nutshell, Reading Bear is designed to help children learn to read, using a hybrid of videos, PowerPoint presentations, and ebooks.

How to Draw and Paint

How to Draw & Paint was Future Publishing’s attempt at getting folk, well, drawing and painting. The iPad app was its latest addition to its digital arsenal, with each edition arriving with interactive content that shows readers how to use Photoshop to create digital artwork in a particular style.

The series kicked off with How to Draw & Paint Manga in its first issue, featuring a gallery of well-known manga artists, whilst incorporating animated lessons on how to get to grips with the basics of the genre.

➤ How to Draw and Paint

Hopefully you’ll be able to find at least a few apps here that have thus far escaped your radar. And if you want to check out the best productivity, lifehack, travel, media, photo, video, employment, job-hunting and social apps of 2012 too, be sure to keep tabs on our upcoming roundups over the next week or so.

Read next: Facebook files for 'Poke' trademark (after obtaining and abandoning it earlier)