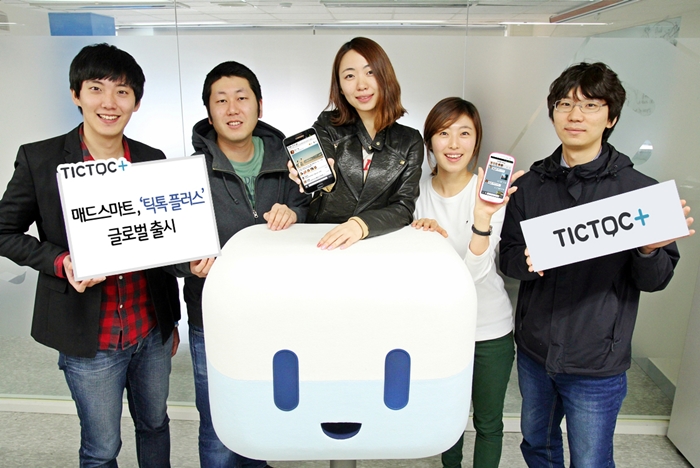 Korea’s underdog messaging service TicToc has set its sights abroad with the international launch of TicToc Plus on the Google Play store and an upcoming iPhone app.

The recently updated TicToc Plus Android app offers unlimited calls and messages, integration with Facebook photos and YouTube videos, stickers and group chat. The app is currently available in English and Korean with more languages planned soon. The iPhone version of TicToc Plus is scheduled to arrive next month.

TicToc was originally developed by MADSmart before the company was acquired by wireless operator SK Telecom’s platform-focused spinoff SK Planet. Though TicToc’s 10 million-strong user base is no small feat in itself, domestic rival Kakao Talk has fared better, reaching a 90 percent attachment rate on the country’s smartphones.

When Japan’s DeNA announced its own messaging app Comm last week, I called the Asian messaging space crowded. Line is dominating Japan with 70 million users, while Tencent’s Weixin (or WeChat) is on a roll in China with 200 million users. Over in Taiwan, Cubie has carved out its own space. Each service is in the midst of using its home turf as a launchpad to reach out to other countries throughout Southeast Asia and beyond.

International services like Whatsapp and Facebook Messenger have done well in some Asian markets, but local competitors have leveraged home court advantages to rapidly build critical mass. At this point, it’s anyone’s game as services move quickly to partner up with carriers, handset makers and other Internet companies in order to snatch up users on the way to the top.

➤TicToc Plus on Google Play

Related: Here are 6 reasons why Facebook needs to buy a mobile messaging service

Read next: Apple to open retail store in Shenzhen, China on November 3rd