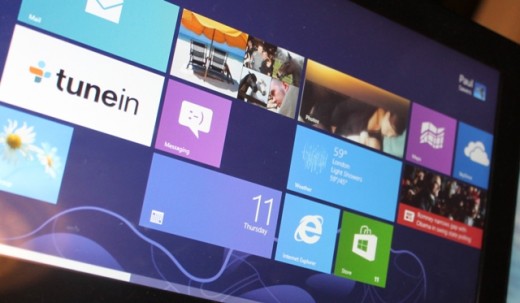 So the Windows 8 launch came and went, we saw some pretty quirky shenanigans going on around the big Microsoft P-A-R-T-Y in Times Square, and now we’ll really see what the public makes of its new operating system.

It has been a slow road to launch for the computing giant, with Windows 8 being made available in various guises over the past year, including the Developer Preview which rolled out last September, followed by the Consumer Preview (February 2012) and Release Preview (May 2012). Then, on August 1, Windows 8 was released to manufacturing (RTM), with all the major creases ironed out. In theory, at least.

A lot has been written already about the latest Windows incarnation, but the proof will very much be in the proverbial pudding. I, for one, can’t wait to see how the public react to it in the coming weeks and months, as more and more Windows 8 machines roll off the conveyor belt. And as I wrote earlier this week, Windows 8 is fundamentally a nice operating system, but there are flaws. And I feel these flaws will really come to the fore when this hits the mainstream.

However, we’re not here to dwell too much on this…most of it has been said already. In the build up to launch, Microsoft has been very vocal about its efforts to encourage developers to build for the new Windows Store, and word on the street is it has even been luring folk over from iOS and Android, to convert their wares for Microsoft’s new world order.

It’s all very well taking Microsoft’s word for it, so we decided to touch base with someone who’s actually developed for Windows 8, to get their perspective on things – the whos, hows, whens and, well, whys?

Before getting into software development and founding iCandi Apps, Andy Weekes was a music teacher at a secondary school in Birmingham, England. But despite making a living from trumpets and tambourines, technology has always played a big part in Weekes’ life.

“I have always been interested in computers and technology to the point of near obsessiveness,” he says. “So it seems natural that having taught music, I’m now venturing into my other area of enjoyment.”

Weekes has actually been a developer since 2008, and says he was inspired by the famous Steve Jobs keynote speech which launched the iPhone 3G and the App Store. “I was one of the first people to queue for an iPhone in 2007, before the App Store was launched. As soon as it was announced, I didn’t think about it, I just knew I had to develop apps, no second thoughts. I was naturally drawn to it.”

Weekes has now moved into app development full-time, and says that although he has developed for Android, he prefers iOS’ Objective C and the Xcode environment. “Xcode is more streamlined from start to finish, through to store submission with the integrated simulators and so on,” he says. “Android is not a streamlined experience for a developer, and requires some getting used to in my opinion.”

In terms of apps you may already be aware of, Weekes is responsible for The Night Sky, which is available for iOS, Android, Mac and, now, Windows 8.

Weekes developed three apps for the Mac App Store, and clearly it’s a natural progression having acquainted himself with iOS. But why Windows 8?

“Windows 8 will be another string to my bow,” he says. “It’s important for iCandi Apps and users that great apps such as The Night Sky are available across many good platforms. It enables user-choice, and also increases the market iCandi Apps serves.”

As we’ve noted previously, Microsoft has been working feverishly to get developers on board – after all, without apps, an app store is just a store…and an empty one at that. And this is how Andy first came on board with the idea.

“Microsoft contacted me. Initially I asked them about the distribution opportunities for the app, I was not interested in a website download,” he says. “When they told me about the Windows Store, I just knew The Night Sky had to be there. They invited me down to their UK headquarters in Reading, and we got started.”

Irrespective of the extent of your Windows-centric ways, there is no denying the market here is potentially huge. Windows is – and likely will continue to be for some time – the default operating system for the vast majority of the PC-using planet.

“The market potential is obviously a strong point, but also because it is interesting developing apps that have to work on desktop and tablet,” he says. “A challenge but, at the same time, very interesting.”

For Windows 8, The Night Sky has been given a Metro-makeover, with live tiles that tell users about key celestial events taking place soon. It also has a “snap view”, so you can browse the heavens while reading up on what exactly it is you’re looking at.

However, there are inherent issues – in my view – with the way Windows 8 is set up.

It’s worth acknowledging that many have criticized the Windows Store for not having enough apps for the Windows 8 launch, but I don’t think that’ll be too much of a problem for long, if it’s one at all. Google has launched a Search app, Microsoft is launching a Skype app, and I’m being inundated with pitches for Windows 8 apps left, right and center.

Microsoft’s new Windows Store is fine in itself, and will only grow over time, but the duality of the desktop and Windows UI (Metro) apps could get really confusing. As you can see here, a search for Evernote brings up both the desktop version and the Metro-style app in Windows 8. When I log-in to one, the other doesn’t know about it.

So…does Weekes see this as an issue?

“I don’t really see it as a major problem,” he says, “however in my opinion I do feel it was a compromise Microsoft made, as the risk may have seemed too high to go completely to the Windows 8 Style UI. This would of been a radical change, especially for the business market.

“I understand why it exists, as many business users will want to have a standard desktop experience,” he continues. “However, on a positive note, users now have the choice and the best of both worlds. The more traditional Windows 7 look, and the new Windows 8 experience in one device.”

Weekes says that the biggest problem developing for Windows 8 before it launched, was that there were no purpose-built Windows 8 devices to test apps on.

“The Night Sky becomes magical when installed on a device with integrated gyroscope/magnetometer,” he says. “Windows 7 tablet devices do not have this, so we had to come up with a ‘make-shift’ solution of buying the sensors and adding the hardware to previous Windows 7-based tablets to test on. Luckily, the new Microsoft Surface, which is designed for Windows 8, and many other Windows 8 devices, will have these sensors installed as standard, so users will have a magical experience.”

So perhaps as more Windows 8 devices hit the market, we’ll start to see a much bigger developer influx, though Microsoft has thus far been elusive on the number of apps currently in development, either in-house or by third-parties.

Moving forward, does Weekes see Windows 8 being a lucrative platform for him? “I honestly do not know,” he says. “It is early days, the Windows Store seems geared towards free apps at the moment, however this may change after launch, I hope to have as much success on Windows 8 as I have on iOS. However, time will tell.”

The jury is very much still out.

It’s safe to say that one of the big target markets for Windows 8 will be enterprises. James Dravitz, Chief Strategy Officer at Myriad Devices, a mobile consulting and development company in Fargo, North Dakota, chipped in with his thoughts on the issue of Windows 8 app development.

Myriad works in mobile app development, enterprise integration, and mobile strategy/consulting. Many of its clients are companies looking to streamline internal processes, and Myriad was invited to discuss developing Windows 8 apps.

While there has been a push to get Android/iOS developers over to Windows 8, Dravitz says there are hurdles, but they’re not specifically related to Windows 8 per se, or the lack of technical talent.

“It’s not that we can’t develop on the new platform, we have employees who are capable of Windows 8 development,” he says. “The issue is what the market demands – our clients are businesses, and we develop on the platforms they ask, or what we recommend. The underlying factor: Our clients want to go mobile, and they have the devices to do so. The integration from the phone to PC is nice, but we already integrate with their internal software.

“Although the benefits of being ‘first to market’ in the Microsoft app store seem appealing, the brand awareness proposition at the moment isn’t convincing enough for us to take development time away from our clients,” he continues. “We may do so in the future, but we’re busting at the seams with projects and growth as it is, and Windows is not on the radar from either side at the moment. My question to Microsoft would be: Can we blame them?”

Indeed, this is a fair point – convincing developers to reproduce their wares for Windows 8, as with Andy Weekes, is one thing. But convincing enterprise-focused app developers such as Myriad that Windows 8 is worth their while, could be a challenge. So will there be that big a difference between the drive to lure developers for the enterprise and consumer segments?

“It is much different for the consumer market and not always better,” says Dravitz. “Initially, it will be harder to convince for Windows 8 for business marketing purposes, but easier for the rest – games, utility, etc. Since Microsoft is seeking developers to put apps on the market, marketing opportunities and adoption are much higher since the pool is much smaller to choose from. Low competition makes it a good opportunity for those who want to be first to market.”

But Dravitz does stress that they’re ready to jump on board with Windows 8, when the time’s right. “The issue is convincing our customers that a Windows 8 app is worth developing for internal business processes or customer impact,” he says. “Until I’m able to overcome that, it’s a risk that we aren’t able to take.”

It is still early days. But despite the naysaying, it’s difficult not to see Windows 8 appealing to a growing number of developers over time – success breeds success. Google’s pushing to increase its presence on the platform, The New York Times has landed, Babbel has 11 language-learning apps, Hulu’s on board and even we have embraced Microsoft’s new operating system.

It’s thought that the Windows Store currently sits at around 10,000 apps, and the more Hulus, NYT’s and Babbels that jump on board, the more others will want – nay, need – to get involved. Thus, it’s difficult not to see more developers working for Windows 8 in the foreseeable future.

Read next: Meet the superheroes fighting for your right to mobile privacy