RunKeeper has released a brand new version of its popular exercise monitoring and sharing app for iPhone today.

Version 2.8 brings a slew of exciting features, including in-app Facebook integration and leaderboards. This means users can now find out which of their existing telephone contacts and Facebook friends are already using the app, and add them to their own for instant comparison.

“In the spirit of healthy competition we also added a leaderboard, so you can see how you stack up against your friends each month,” an update on the company’s blog said. “You can even ‘nudge’ your not-so-active ones to go for a run, walk, or bike ride in order to give them a little extra motivation!”

Leaderboards are a fantastic feature for sport and running enthusiasts, as they go a long way to promoting competition and friendly encouragement. We’ve already seen it work particularly well on Nike’s own running app as NikeFuel, and don’t doubt that it will be just as popular for RunKeeper’s community.

If you prefer keeping all of your progress private, RunKeeper still has you covered. In the updated iPhone app the company has included a ‘Me’ tab, which gives some fantastic little insights into your activity history and progress. RunKeeper users are encouraged to set milestones and targets when they first register with the app, so whether you’re hoping to run a marathon or just walk more often to work, it’s good to know how you’re improving at any one time.

“It compares how you’ve been doing this week/month versus the one prior, and showcases personal bests that you’ve achieved while using RunKeeper,” the blog post adds. 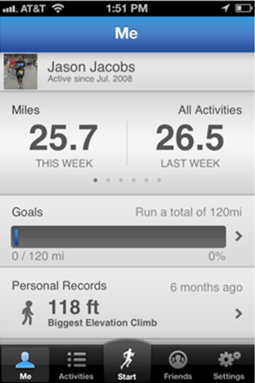 While many of us have the best of intentions when it comes to exercising, it’s all too easy to fall out of a regular schedule. You might decide to run in the evening after work, only to suddenly confirm that you’ll go have a drink after your shift. Or tell yourself you’ll make up for that run on Saturday morning, only to forget because it’s not part of your regular shedule.

Well, fear not because RunKeeper now supports pre-planned workouts. Once you have finished and recorded any exercise with the app, you can then schedule your next one instantly.

Just like any other reminder, it’ll then flash up on your phone with it’s time to head out, ensuring that you don’t forget or put it off. The blog post adds: “If you are following a RunKeeper training plan, you can also create automatic alerts for each workout in your plan, if you choose.”

The company revealed that a similar update is “coming soon” to the Android version of the app. So if you’re not an iPhone user, just hang tight for now.