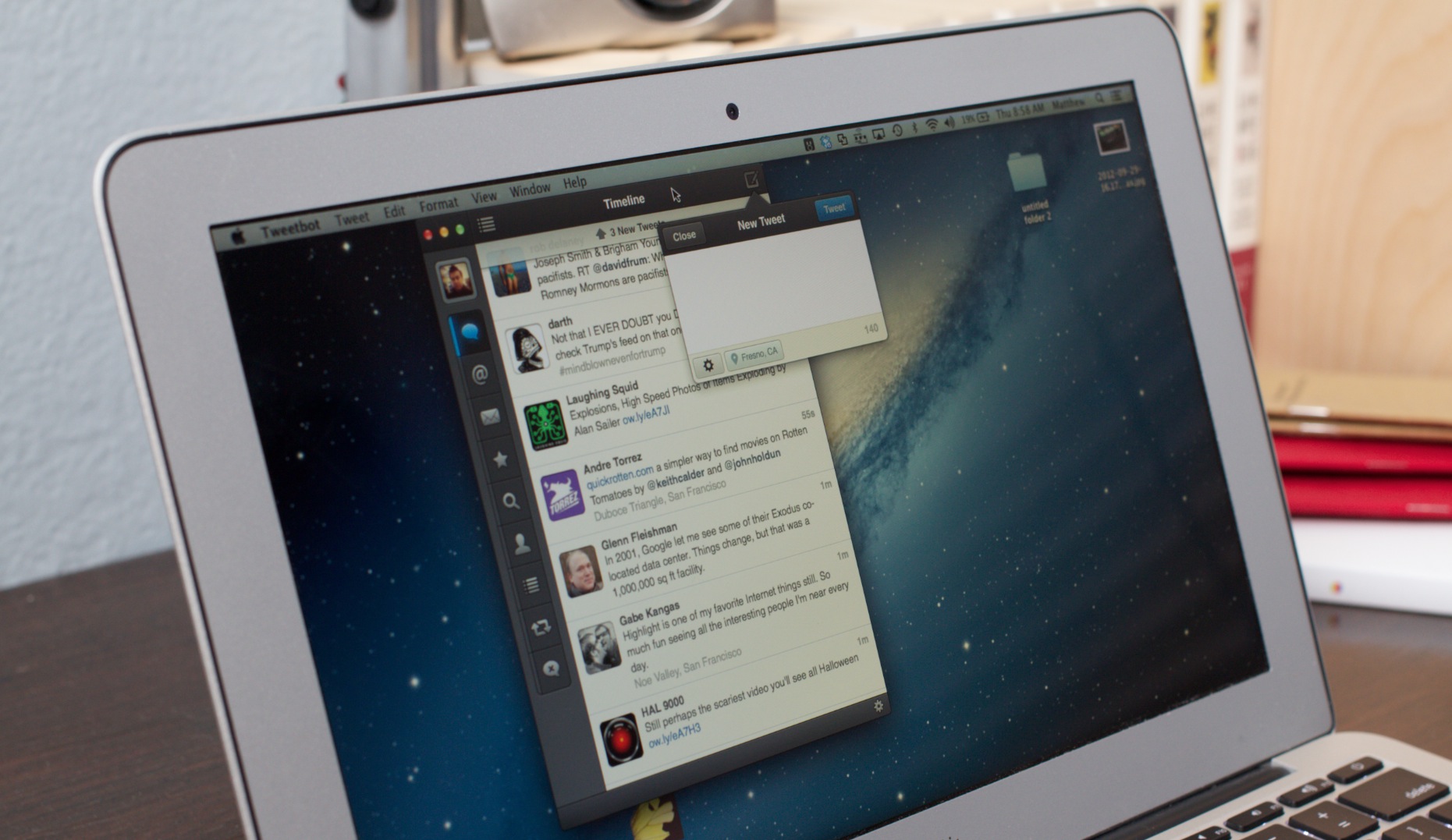 Tweetbot for Mac follows in the footsteps of some pretty great Twitter clients for Apple’s desktop computers, including Tweetie and the official client that was based on it. Unfortunately, because of Twitter’s hostile attitude towards independent clients that aren’t its own, it is very likely to be the last really great one we see.

Built by Paul Haddad and Mark Jardine of Tapbots, Tweetbot is among the best bits of client software I can recall. It’s deep, but easy to use, and it displays a competence and polish that is sorely lacking on the Mac these days. Feature rich without being overly complex, and powerful enough to replace Tweetdeck for some users, it’s really pretty great. Be sure to check out our interview with Jardine here.

That’s why it’s a shame that we probably won’t be seeing many more like it, if any at all. Because of the restrictions on third-party Twitter apps, developers like Tapbots can only sell a limited amount of copies of their Mac apps. “We only have a limited number of tokens available for Tweetbot for Mac,” Haddad explains, “These tokens dictate how many users Tweetbot for Mac can support.”

That limit is separate from the Tweetbot apps for iOS, but is lower than double what the alpha managed to collect, as that’s the limit imposed by Twitter. “Once we use up the tokens granted to us by Twitter,” says Haddad, “we will no longer be able to sell the app to new users.”

He says that Tapbots will continue to support the app, even after it cannot sell any more copies to new users, but that has forced them to charge more for the app, which runs $19.99 on the Mac App Store. “We know some will not be happy about Tweetbot for Mac’s pricing,” says Haddad, “but the bottom line is Twitter needs to provide us with more tokens for us to be able to sell at a lower the price.”

“We spent a year developing this app and it’s the only way for us to be able to make our money back and continue supporting it with updates in the future,” he adds, “feel free to let Twitter know how you feel about it.”

Note, if you’re an Alpha or Beta user of Tweetbot that decides not to purchase the app, you should revoke access, which will free up slots for new customers.

And Tapbots isn’t the only third-party developer feeling the effects of the new rules. Echofon has announced that it will shutter all of its desktop clients to focus on mobile.

In fact, I don’t think it’s a stretch to say that by the end of next year, there is a very real possibility that new users who do not already have a token slot may be completely unable to use a Twitter client other than the website from a Mac.

That’s largely due to the fact that Twitter has shown no interest in updating its Twitter for Mac client, which is slowly disintegrating due to inattention. Even if Twitter does release an updated Mac client, It will likely be very much along the lines of its mobile apps, with a focus on delivering a window on the web and Twitter’s ad-friendly Cards product, rather than any sort of pure native experience.

So, for the limited time it is available, Tweetbot for Mac could very well be your last best hope for a native Twitter client outside of the new ‘consistent’ experience that the service is crafting for itself.

But how is it to use?

I wondered about how to approach this review, as I did a fairly extensive one with the alpha was originally launched. You can read that if you want a detailed piece-by-piece overview of the app, but I thought I’d take you on a tour of some of the major features here instead, some of which have been changed or upgraded since the original alpha release.

The app carries over the aesthetic of Tweetbot for iPhone and iPad, so if you’re pleased with the robotic, textured look of those apps, then you’ll be happy here. The care in animation and indication carries over as well, with plenty of sliding drawers, crisp three-dimensional panels with just enough feeling of depth to give you context and pleasantly popped accents like the favorite star and tweet button.

The compose window has gotten a great upgrade from the original, with the added ability to see the last reply, or couple of replies if it’s part of a conversation, while you’re jotting down your witty riposte. It’s one of the things that I really hope comes from the Mac version over to the iPhone version of Tweetbot.

When you fire up the compose box, it attaches itself to the button or tweet you used to initiate it, so sometimes the context is in front of you, but my stream goes by quickly and sometimes I pull the pane off and throw it onto my desktop to reply ‘in a minute’ and forget what I was even replying to. This helps retain that context.

Tweetbot 1.0 also now supports notifications via Mountain Lion’s Notification Center, with its own custom icon. The notifications support mentions, new followers, Direct Messages, retweets and, of course, favorites. Because if your tweet is faved, and there is no notification  it does not really count. These can be enabled  for everyone or just for those you follow. And the icon is also gorgeous, which is a plus. It sits nicely between Rdio and Automator on my dock.

The multiple column view works better than ever, giving you an ersatz Tweetdeck for those times when you need to watch mentions and your feed and a search and a list at the same time. All columns remain responsive, although the feed in an individual profile column will not stream, something that Haddad says is an API limitation.

Columns are now grabbable and movable using their bottom handles, and you can pull one out of the middle, which is nice. There is also now a discreet menu for removing columns that is accessible via the gear at the bottom.

Double-clicking on any column will jump it to the top, but I have found myself wishing that you could swap the column by clicking on its name. Tweetbot for iPhone uses the title bar to access your various timelines and lists, but there’s no need for that here. What would be useful is to be able to click the name of the column and choose from a list of all available columns so that you didn’t have to close one and re-open another.

Much improvement has been made in the performance of the app, which is the first that Tapbots has undertaken in a partnership, bringing on Mac developer Todd Thomas. Haddad has known Thomas for close to 15 years and says that he trusts him. “An app like Tweetbot is a fairly complex undertaking,” says Haddad, “and you need someone who has been working with the Cocoa frameworks for a long time to do it justice.”

When quizzed about developing Tweetbot back when the alpha was launched, Haddad said “I really wish the UI frameworks of iOS and Mac were more aligned. The low-level “model” code is nearly identical between the iOS and Mac versions of Tweetbot, but the UI all had to be done from scratch.”

AppKit, Apple’s framework that helps developers create apps with complex interfaces on the Mac, is showing its age, he says. “Doing fancy animations and smooth scrolling isn’t quite as easy as on iOS. Mac OS X 10.8 improves on this situation but I think it’s getting close to a time where Apple needs to look at fully re-hauling or retiring AppKit for something closer to the UIKit available in iOS.”

I don’t know about you, but an enormous part of my Twitter experience involves gifs. I look at gifs, I share gifs, I respond with gifs. That’s why I was sad that the original alpha didn’t handle them all that well. Thankfully, that has been rectified in the final release. Gifs play back just fine in tweet detail view as well as in the separate viewing window that comes up when you click an image thumbnail.

Posting gifs is a bit more tricky because the default image uploader, Twitter, does not support gifs. So you’ll have to dip into Preferences and change your default uploader to another service (I use CloudApp) if you want to jus throw an image into a tweet window and send it out. Links that point at gifs work just fine if you’d rather just copy a URL.

Tweet streaming works just as well as the original, and the pin to top issues I had seen throughout the beta seem to have calmed down in the final release. I’m a big fan of turning off the persistent ‘new tweets’ bar if you’re pinning to the top by the way, because I still see it glitch a bit now and then and stay even when a new tweet rolls in on the screen.

Stream position can be synced via iCloud or by Tweet Marker. Both are great services with very little lag, but iCloud is built into iOS devices and I’d imagine a lot more people will be using it. Tweet Marker is still a great service though, so if you’re a fan, it’s there.

The keyboard shortcuts have been updated across the board, with much more logical choices. There are the stock ones:

Clicking on an avatar will take you to a detailed profile view with all of the usual stats and an embedded timeline view.

Multiple accounts are supported, as are all of the standard Tweetbot features like muting by keyword, client, person and hashtag. Retweets by others, lists, your profile, the new unified search, your favorites and replies fill out the sidebar. The direct message section holds an enormous history of DMs, something that the iPhone and iPad versions of the app also excel at.

For a while there, we had a glut of great third-party Twitter clients. Like many of you, I grew to know Tweetie as Twitter, not separating the two in my mind. But, those days are gone, and Tweetbot for Mac is the likely to be the last great app of that era, unless Twitter is persuaded to change its mind.

But Tapbots is a thriving development house that isn’t going anywhere, and has pledged to suppor the app even after they sell their last available slot. That’s why the price is relatively high, because they can only ever sell so many copies and they have to continue to support it for years after that.

So, though it may be the last, it is still the best, and a safe bet at any price.