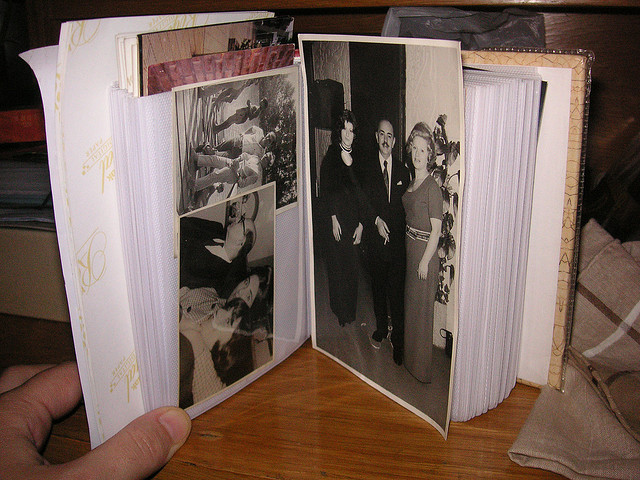 I’m a big fan of photosharing apps, and I mean fanatical. I shared my thoughts a while back in a piece called “What are we going to do with all of these photos?” and popular app and company Bump has come up with an answer. The company has launched a brand new iOS app called Flock (not to be confused with the social web browser), and it’s for sharing photos with friends, but in collaborative albums with context.

Yes, yes, you probably think you’ve heard of something like this before, but Flock absolutely blew my mind when I started playing with it.

– Sign up with Facebook, Flock finds all of your friends who have the app
– Flock scans your Camera Roll for photos that match the time, date and location of photos of your friends
– You’re invited to share those photos with one another, in a collaborative album

Boom, you now have a private photo album with your friends who might have been at an event with you. In my case, my fiancee and I fired up the app and since we’re together a lot, we were able to join all of our pics from random places together.

The question that she and I usually ask each other is “Can you send me that pic?”, and we joked that we say it often. With Flock, we never have to say it again.

This app is truly magical

When I got a demo from CEO and Co-founder of Bump, David Lieb, my jaw literally dropped. For the first time in quite a while, I couldn’t wait to get my hands on an app, because I knew how much time this would save me, and how it could unlock my Camera Roll.

Speaking of my Camera Roll, I have over 3,000 pictures on it. What Flock has done is unlock all of those photos and gave them context when it comes to people who matter the most to me. It’s a great feeling that I got from Timehop, which reminds you of all of your social interactions from the year before.

Once you’ve connected with your friends and your Camera Roll is scanned, you are prompted to start sharing photos that have meta data matches. Again, that’s time, date and location data that Apple stores with all of your photos. As those matches are made, albums show up in a feed and prompts you to add some of your photos:

You’ll get a push notification that prompts you to add photos to an album as well, which is super handy.

Once you do this a few times, you’ll probably find yourself as excited as I was. Here are all of these photos that are literally just sitting around with no place to go, and now Flock has found it. By default, your photos aren’t shared with anyone other than the folks who were there with you, but you can opt share an album on Facebook if you wish.

The app is absolutely gorgeous, as are the album views that it provides. You can dig into individual photos and add comments or “like” them:

As I was testing Flock with a limited group of people, I didn’t see the full power and potential it holds for when you’ve taken photos at an event that a bunch of your friends have attended. I imagine that for a big party or baseball game with co-workers and colleagues, this could be even more epic.

Lieb tells me that the company has been working on Flock for the past 6 months, and it hasn’t taken any focus away from the original Bump product at all, which has nearly 100 million downloads at this point. Lieb says that his company wants to make things easier: “Despite the name of Bump, it’s got to be easier than that to do what I want with the phone.”

Think of all the time you’ll save by not having to wait for people to upload photos to Facebook, Google+, Twitter or send them to you via text. People don’t remember to do that, and prompting them makes you feel annoying.

Give Flock a try and you’ll see exactly what I mean.

Read next: Google Talk down for the majority of users, Google has no ETA on a fix