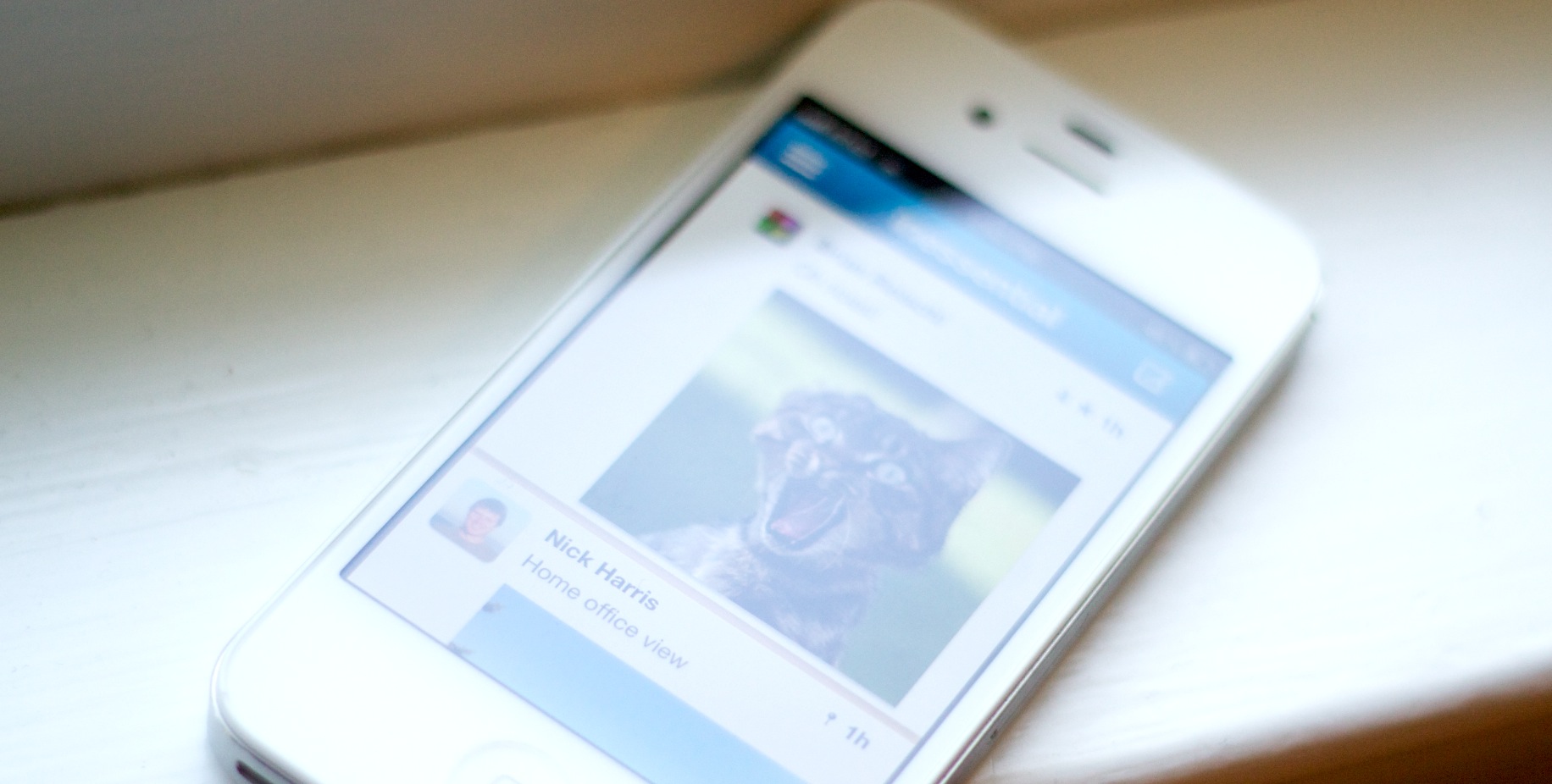 Email sucks. It’s probably one of the worst parts of my day and people are always wishing they could quit it. But so much of what we do in the workplace is centered around it as a way to stay in touch and communicate.

Glassboard, a communications app for small businesses and groups, has gotten a stellar update, bringing a completely redesigned app with improved notifications, new navigation and file sharing support. More importantly, it’s good enough that it could help you kill off a ton of the email mucking up your creative process.

The app is from Sepia Labs, which is headed up by Brent Simmons, the developer originally behind incredibly popular Mac apps like NetNewsWire (now in the capable hands of Black Pixel), MarsEdit (now at Red Sweater) and TapLynx (now at Push.io).

Sepia Labs was born out of the idea to make Glassboard. The team also includes Nick Harris, who did the iPhone coding and Nick Bradbury, who worked on the Android version of the app.

If you’re familiar with private social networks like Pair or Path, then you know what Glassboard is all about. It allows members of a board to share messages, photos, videos and now files, with one another. You can fire up multiple boards and invite certain members of your company or social group to the board, sharing information with select people.

I asked Simmons what the genesis of the app was, when there were so many projects that the group could have tackled. “We wanted to work on something important. We all care about privacy, and we keep seeing Facebook and other networks keep doing questionable things.”

A question of free

A key feature of Glassboard is that it offers no posting to Twitter or Facebook, and no advertising at all. “While we didn’t and don’t want to create a social network like Facebook,” says Simmons, “we still wanted to create a private system. A system with no data mining or advertising.”

This is an interesting point, because there has been so much discussion of late about products (read apps or services) that are free, and whether they can be ‘trusted’ not to sell your information to advertisers. Or, for that matter, whether it is possible to build a lasting service at all on a free or freemium model. The recent relaunch of Pocket as a free app and service became a fulcrum for this debate.

Nothing about Glassboard feels cheap or exploitive. It feels like an app that you would pay money for. And when Simmons says that ads aren’t a part of the app’s future, I believe him. So, what about the economics?

“We have a number of different possibilities, different things we might charge for,” says Simmons. “We’re whittling those down and working on the first. We want to make money! But step one was to build an app that people want to use and that makes working together easier.”

Developing for Android and iOS

The app is available for Android, the web and iPhone and the new version looks great. I poked around at the original when it launched and liked the concept, but not the design so much. I also saw some of the other versions of the app that might have been, shown off at Macworld in a talk by Black Pixel designer Dave Wiskus, who spoke at TNW 2012 as well.

The app was created out of a desire to leverage the ‘social network method’ of communicating for the benefit of people working together to collaborate and make. “We realized this could work well for people who work together, whether they’re co-workers or not.”

Here at TNW we use the Convo service, which has a desktop client and apps. There are other options out there like Campfire and Yammer as well. And it’s true. Email is a terrible collaboration tool which proves far too limiting with a widely spread team acting on fast-moving stories or projects. That’s Glassboard uses the social media model, rather than the email mode.

The new design was done in-house by Simmons, and is massively improved. It has a great  feel that is reminiscent of Sparrow and Path, two apps whose design I happen to admire a great deal.

I asked if Path was an inspiration for the way that Glassboard works and Simmons said that it was, along with other services like Twitter and Facebook. “I can’t point to one app and say that was the one we were thinking of — but I can say that Path is a beautiful app with a lot to admire.”

Glassboard is also positioned strongly when it comes to privacy. By default, everything is private in the app. This brings to mind the tried and true network security guideline that you start out by closing all ports, only opening the ones that you absolutely need for the clients to get their jobs done. Even the icon of the app, which features a speech bubble with a lock on it, telegraphs this attention to privacy.

“I think that real-life is more complicated than what Facebook and Twitter model,” says Simmons. “Should my co-workers all be my friends on Facebook? Is my wife just another Facebook-friend? No….there are different kinds of relationships between people — and that matters.”

With Glassboard, you can fire up individual boards and control memberships to each one individually. There is no ‘main stream’ that has all of your contacts sharing information in one big morass. Instead, you can personally view all of your boards, but the individual members of those boards only see what you choose to share with them specifically. Think of it as multiple ‘Paths’ that you’re the gatekeeper for.

Since the app was developed across the iPhone and Android apps simultaneously, Simmons says that the Sepia team was able to keep design parity, minus a few platform differences. But there were no corners cut, which makes both the Android and iOS versions of the app stand out as exemplary products that work beautifully.

Both versions were done by writing for their platform specifically. “We didn’t cheat by using server-generated HTML and web views — we wrote native code, using the native SDKs, on both platforms.”

“I’ve noticed lots of small developers shipping Android later, or Android not-as-good, or both — but I don’t like that. I wanted to prove that even a three-person team of mobile app developers could ship for Android and iPhone at the same time, and make the apps equally as good. I believe we achieved that.”

Simmons credits Glassboard for helping them to coordinate the work to make the apps, along with the efforts of Bradbury, who also made the super popular FeedDemon RSS reader for Windows.

Glassboard 2.0 is a wonderful revamp of the original app, and a fantastic way to use the private social network model to share with groups of people. And it’s not all business. If you’ve enjoyed Path for personal use, but wished that you had even more control over what you shared and with whom, Glassboard could be a cool solution.

But the focus of Glassboard stays solidly with helping people collaborate for work.

“We care an awful lot about solving real problems. It’s fun to post a picture of the sweet potato french fries you’re about to eat — but there are tons of apps for that,” Simmons says. “We wanted to make it so that teams can communicate better and get things done.”

Note: If you’d like to try out a ‘working board’, Simmons has posted up a test to try out:

I created an inessential board to give you an easy way to try it out. Here’s what to do:

Read next: WordPress gets an [unofficial] built-in app store for plugins and themes