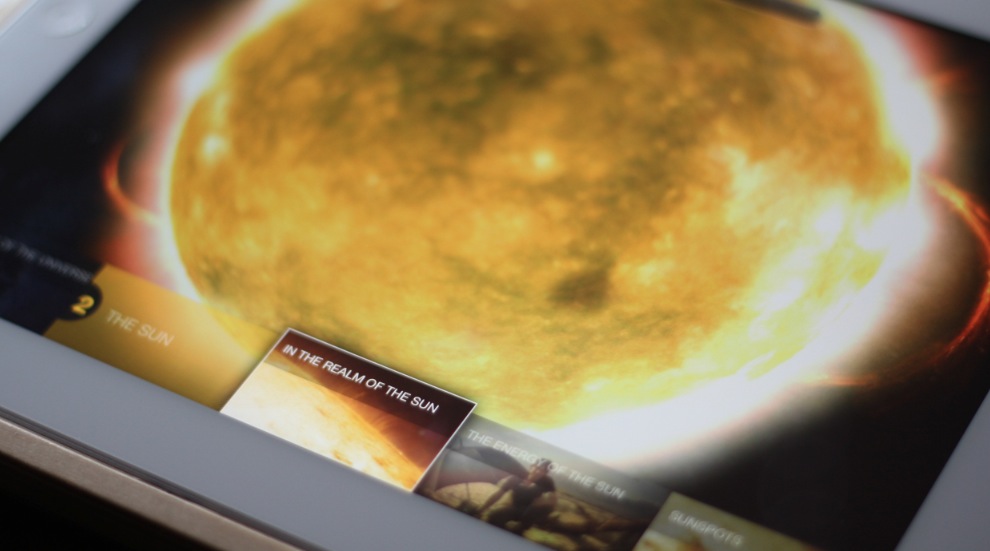 Wonders of the Universe is an incredible feat. It’s an iPad app that packs in a custom 3D rendering engine, tons of video, text and image content from Professor Brian Cox’s Wonders series and a brand new interface that works like nothing else you’ve seen from an ‘interactive book’ before.

Created by development house The Other Media for publisher Harper Collins and packed with BBC content starring Cox, its got a fantastic pedigree.

The app, first and foremost, is absolutely gorgeous. Our universe is rendered in stunning visual detail out from clouds of galaxies down to the subatomic building blocks of life. It seems like it would be impossible to pull off, but the app does it and does it well. As you take your tour throughout the cosmos, lovely animations pull you through space to your next objective and atmospheric music sets the tone well.

Orbits, a sun with blazing sunspots, a flickering pulsar and clouds of space matter in bold hues all keep space feeling interesting and packed with cool stuff to check out.

Content is presented in sections that take you through various parts of the universe from small to large. To navigate, you simply swipe upwards on the thumbnails at the bottom to expose the text, video and graphics that make up the guided tour. When a video is present, it automatically swells to fill the screen and begins playing, when an image is embedded, it does the same, pushing the text back as it does. All the while, the live 3D rendered universe is hanging around behind the content, it makes for a fantastic experience.

The app is a great experience when using AirPlay for the video or full on AirPlay Mirroring for the whole interface. The universe looks gorgeous on my 46″ TV and the images and video scale well to a larger screen.

All in all, it’s a more engaging and pleasant experience than any other electronic textbook or edutainment app I’ve seen. Even the best new ebooks from Apple’s textbook initiative or PushPopPress’ Our Choice app for Al Gore just don’t compare. This is really a defining app for how these kinds of experiences should work on a tablet.

I spoke with Chris Harris of The Other Media, the app’s director, about the process of bringing the interface to life. The framework, Glide Publisher, was custom built by the team because they felt that the existing formula of reproducing a flipping book page on the screen was doing the tablet a disservice.

In fact, Harris points out to me, the entire tour can be navigated with a single upwards swipe of a thumb, repeated. Sure, you can touch, pinch, pan and otherwise manipulate the 3D view and images, but at its core, it paves the way forward with one simple, natural and very discoverable gesture.

Harris says that the team, including lead developers Mateusz Stawecki and Adam Swinden, created a 3D engine from scratch, and generated the new reading mechanic as well. But it doesn’t stop there.

Because they wanted to get a realtime look at exactly how the universe was shaping up, they actually built the engine so that the planets could be modeled and placed right on the iPad itself in a special developer mode. “The next time someone tells you that the iPad isn’t for creating,” Harris tells me, “just point them at Wonders, because we made pretty much everything right within the app.”

Wonders is an app that is created in the AAA mold that you’d normally see from a big-budget game title. It’s a marquee app that you would normally never see in the ‘edutainment’ market. “We want somebody seeing it to want to buy an iPad just to use it,” says Harris.

And they’ve succeeded. The 3D model of the universe alone is fantastic. It’s worth just exploring and moving around in the environment that they’ve created with this app, and, since the whole app is built on top of a CMS (content management system), content can be added on as expansions later. It looks amazing, especially on a new Retina display iPad.

But the 3D would just be a candy shell without the filling of the BBC content, which is all great. The text and videos reinforce the simple lessons surrounding the elements of the universe and Cox is an engaging and wonderful presenter.

And to top it all off, you have the interface, which breaks from the stultified ‘book on a tablet’ paradigm that even aggressive ebook publisher seem stuck on. It’s a breath of fresh air and I hope other publishers besides Harper Collins are paying attention to this kind of unique thinking about the way to present content on the iPad.

It’s hands down one of the best apps out there for the iPad right now and serves as a banner app for tablet education in general. Kids will love it, adults will love it, there really isn’t a reason not to check it out if you love apps that are made with care and a sense of joy.

The app is out now on the app store in the US and UK.