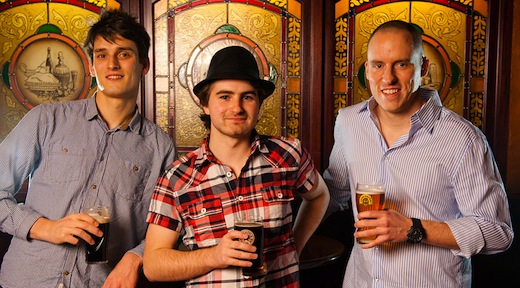 If you’ve never yet felt frustrated by how bad a restaurant’s website sucks, chances are you’ve just not visited a restaurant website. Ridiculous, Flash-based designs, terrible navigation and non-embedded, PDF food menus are apparently de rigueur. But restaurant owners are a busy bunch, so who can blame them for having a lack of time to worry about a website? Now, with the release of happytables, there’s no excuse to suck anymore.

happytables is the brain child of Noel Tock, along with 2 co-founders. They’re WordPress developers who started out selling WordPress themes, but saw that they were “only solving a fraction of the problem”. The obvious gap in the market was a simple, great-looking way for restaurants to make and maintain a website. So happytables was born as a sort of Squarespace for restaurants, which makes designing a great-looking and functional site incredibly easy.

Signing up for happytables, you’ll first notice that there’s a plethora of site designs from which the restaurant can choose. Once that’s done, the fun part begins because the entire site is fully customizable. Since it’s built on WordPress, it also utilizes widgets which bring in important functions with just a drag and drop.

Most importantly, the happytables team has spent a lot of time making sure that the menus are usable and actually look good. You can choose to highlight dishes by adding pictures, or you can save screen real estate on smaller, nondescript items such as drinks.

The next thing that happytables does differently is end duplication. Often times you’ll see restaurants run specials or announce events on their Facebook pages, but then they have to be copied and pasted over to the website. Not only does this take time, but it’s also an unnecessary step. With a happytables site, restaurants can pull in those Facebook events directly to a dedicated page, so that they update dynamically and only require maintenance in a single location. They can also be embedded into a widget, exported to a feed or used with MailChimp integration.

Setting up happytables for a first-time user is amazingly simple. Since it’s WordPress, there’s a GUI backend which is fully customized. Restaurants will see a few startup tasks to help them get started, but then the customization begins, up to and including the ability for advanced users to utilize their own CSS. Tasks such as menu organization are set up in a WYSIWYG fashion, so that what you’re seeing behind the scenes is exactly how it will appear on the site itself.

As with anything that can make life simpler, the old adage applies – you can lead a horse to water but you can’t make him drink. Unless happytables can gather users, nothing will change. Fortunately there’s a plan in place to help make that happen too. Right now, the next 100 customers will lock in $29 per month pricing for life. That’s a $10/month discount over the normal pricing, and there’s no credit card or long-term commitment needed.

The team is also offering a white-label version of the platform, so if you’re a developer who wants to make a business out of making restaurant websites better, the door is open to you. My fingers are crossed, and I’m incredibly impressed by what the team has accomplished. So let’s spread the word and start getting better sites for everyone.

Read next: VC firm Flybridge expands its footprint in Brazil and hires Pitzi's CEO as an advisor