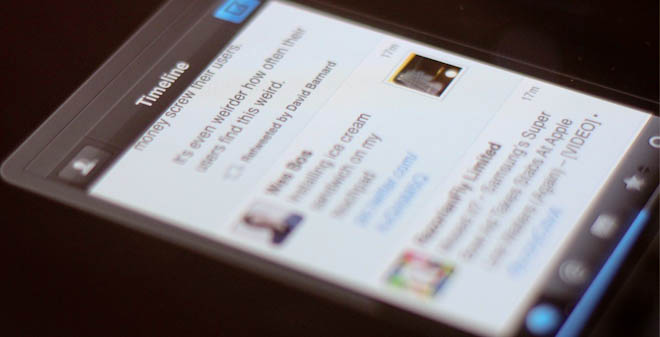 Popular iOS developer Tapbots has released an update to its highly regarded Tweetbot for iPhone that includes several much needed improvements like inline image preview and one-tap links. Additionally, the entire client has received some nice boosts in speed.

In the new timeline view, spacing has been adjusted slightly and some nice visual updates have been made, including better contrasting colors which help to define individual tweets and make the text more readable. There is a tracking bar that continuously tells you how many new Tweets are above your current view. It can be dismissed with a tap.

This helps you to keep tabs on exactly where you are in your timeline. But if you’re bothered by it, it can be removed by a settings change.

There is also a nice, subtle Readability integration built into the browser view now. While viewing any website, just tap the toggle at the bottom to reformat the page into simple, more readable text using the web service.

There are now nice image thumbnails in the timeline which show a preview of any linked images and those can be tapped directly as well. Tappable links are now active in user profiles also, allowing you to visit any links that people have entered in their bio text.

Below any retweets, you will also now see a ‘retweeted by’ bar that is also tappable, taking you to the profile of the person that retweeted it.

A very nice visual upgrade has been made to the Direct Messages display method as well, bringing it more in line with an iMessage or IM application view. This makes it easier to carry on threaded conversations, which I do a lot of in DM.

There is also a timed automatic refresh, allowing all of your tweets, mentions and DMs to be pulled in anew every 5 minutes while the app is open. This is nice, and one step closer to the true streaming client that I would like Tweetbot to be. A new font size called ‘Huge’ rounds out the improvements in view customization.

We’ve had some time to try out the improvements to Tweetbot for iPhone and I can tell you that the single-tap links are much, much nicer than the old two-tap arrangement. The inline images right in the timeline are also pretty sweet too.

The whole app is also a lot faster now, with gestures, scrolling and actions all feeling lighter and more zippy due to the increase. It’s basically Tweetbot, but that much better. A must have update if you’re already a Tweetbot user and a good grab if you have yet to make the jump into a third-party client.