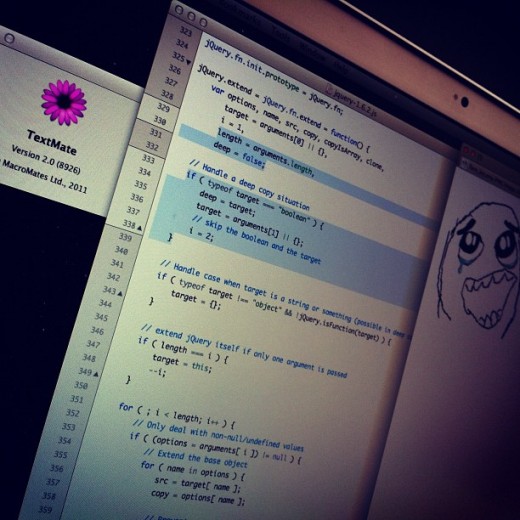 Macromates’ Allan Odgaard has officially announced the alpha release of TextMate 2.0, the hotly anticipated successor to the original alternative text editor. This release marks the culmination of years of waiting for the next release in the lineup.

Note that you can only use the public alpha of TextMate 2.0 if you already have a TextMate license and an Intel Mac.

Since this an alpha release, it definitely is a bit rough around the edges, so don’t get to downloading expecting perfection, but it is very functional and very fast. I’ve been using it since yesterday and it feels pretty much the same, although there are a bunch of changes since the aged TextMate 1.5.10 that you can view here.

TextMate was first released in 2004 and rose to prominence as a viable alternative to BBEdit. Praised for its speed and extensive support for use-case templates called bundles, it has become a major favorite of coders and writers alike. I myself moved to the ‘BBEdit-lite’ TextWrangler a while back because I wanted something faster and lighter but couldn’t wait for the new TextMate.

Some things that didn’t make it into the alpha, but that Odgaard says is coming in the 2.0 release:

Yesterday, a screenshot of the TextMate 2 alpha was the most Tweeted photo on Instagram. You can grab the TextMate 2.0 alpha from Macromates’ site here. There is an alternate link here as well.