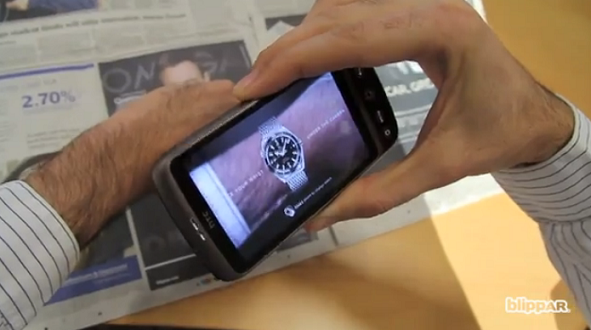 Blippar is the augmented reality app that brings brands to life, and it launched to the public on iOS and Android a month ago. Now, it is arriving in the Irish market and it’s partnering with Dublin newspaper Metro Herald and local TV show FYI to launch what it’s calling “the world’s first fully augmented reality newspaper”.

Throughout this week, Metro Herald will be producing five ‘smart editions’ of its newspaper, where the interactive blippar technology will be used across selected editorial content and advertising. Brands such as Aer Lingus, Jack Daniels, Miller, The Natural Confectionery Company and Universal Pictures International Ireland will be augmenting their adverts and bringing their respective Metro Herald print ads to life.

The Blippar app works when you wave your smartphone’s or tablet’s camera over a branded image, and it comes to life on the screen in front of you. It’s like a 3D website that jumps out at you from a static label or poster.

In partnership with 3e’s weekday interactive news programme FYI, readers will be able to ‘blipp’ a daily feature in-paper, which will take them to additional video content, provided by FYI. Metro Herald will also be using blippar across additional editorial content including a Guilty Pleasures daily poll, daily crossword answers, email the Mailbox (letters page) and by blipping the masthead readers will be able to see a step-by-step video explaining how blippar works, again produced by FYI.

“We know 70% of our readers now own a smartphone and internet usage via their handset is very high. Therefore, as a newspaper, we are always looking for ways to embrace smart technology and make our product as interactive as possible. We have already launched QR Codes and an Augmented Reality campaign with Mazda into the Irish print market. We believe that blippar will now allow us to take augmented reality to the next level by offering instantaneous engagement that empowers readers to interact, discover, play and engage with editorial content and advertising in a quick and seamless way.”

Although augmented reality (AR) has been around for a number of years now, the growing ubiquity of smartphones and tablets is helping bring the technology into the mainstream, and we are now beginning to see some very interesting use-cases for AR. Here’s our original blippar video following our demo of the app back in June:

“We’re hugely excited about our partnership with Metro Herald.  More so than any other media owner, Metro Herald has demonstrated a true commitment to this as a new publishing technology and consumer behaviour that it is here today, not tomorrow.  Rather than taking a ‘softly softly’ advert by advert approach they have embraced a fully integrated content-solution which will see them leading the pack. We looking forward to maximising the opportunity with them for the short, medium and long term.”

Circulated across Greater Dublin, Metro Herald is a free daily newspaper with over 65,000 copies produced each day. They are distributed on public transport networks (Dart, Luas, Suburban rail and buses) and in high-traffic commuter zones around Greater Dublin.