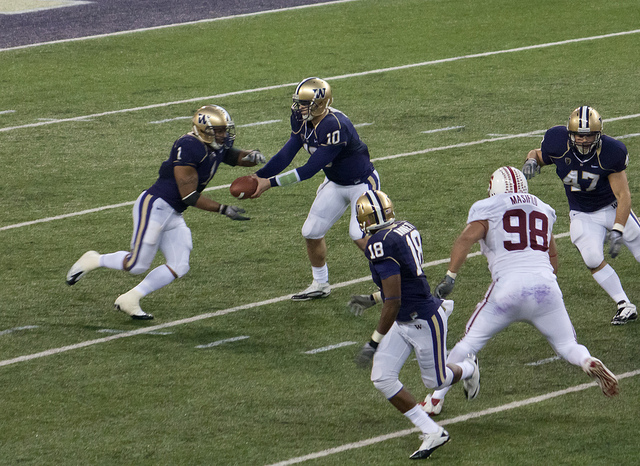 Today is Labor Day in the U.S., which among other things means that the kiddies will be heading back to school tomorrow, there’s a slight fall chill in the air (if you live in San Francisco, at least), and we’re looking at a rip-roaring season of college football. This weekend was the opening game of the season, and we’ve already seen some pretty sweet gameplay.

Last season’s champions, Auburn are holding onto the top spot, with a 42-38 win over Utah State, and from now until January, expect weeks of action-packed nights and Saturday mornings, as teams from across the nation compete to seize the BCS Championship from them.

And to help you keep up on all the thrills, we’ve compiled a list of some very helpful apps that will help you follow your favorite college teams, the top athletic conferences, and track all the statistics that make it bearable to wait for next week’s game. We’re always on the lookout for the best app, so if you have a favorite app that you use to track college football rankings and game day action, please sound off.

Built in collaboration with broadcaster NBC, the Notre Dame Central app is among the finest of the lot. Not only can you track the performance of one of America’s most-most loved college football franchises, the free app pulls in scores, stats, photos and live videos. It’s a tough act to follow, even if it’s been years since Notre Dame the football team really lived up to its status as a powerhouse.

Sportstap is a very powerful app that lets users track game day performance of their favorite teams across a variety of sports. This free app works for the iPhone and on the iPad and will let you monitor games in real time, along with statistics and rankings. And for rankings nuts, Sportstap will pull in your fantasy football picks, updating information on the fly. Sportstap also generates news stories from game day and displays them in a news feed, so you can follow action in your league of choice, and keep up to date with what’s happening across conferences.

This is a simple app for keeping up with game schedules and team rankings, making sure you never miss a beat. From the publishers of such apps as Seat Sherpa, Ultimate College Football 2011 let’s you track seating charts and upload your photos from the stands, Ultimate College Football 2011 want sto make sure you never miss a minute of the action. Follow the game times for dozens of your favorite teams, and keep up to date with stats with a flick of your finger. The interface is simple, and navigation is intuitive. No extra fluff, just the information you want. The app is $.99 in the iTunes Store.

Yahoo Fantasy Football was a real winner in the past, but they seem to have killed the franchise with their latest update, launched last week. Fantasy football leagues are among the most popular time-sinks, and are even banned in some offices. However, that may not be a problem with Yahoo’s app update, because typical reviews give it only 1 star by a wide margin. Too bad. Maybe NFL fans will appreciate it more.

Sports bettors are a special breed of sports fan. While they enjoy the game play, the outcome of every play can mean the difference between a fortune won or lost–or at the very least the difference between, a fun or gloomy Sunday. To serve this particular group of college football fans, iOdds, which is free for download in the App Store, keeps users abreast of up-to-the-minute odds, on their teams, and allows them to track their bets, as well as historical performance of their teams. “I would pay for this app – it’s that good,” writes one satisfied commenter. And while gambling on sports can be illegal, unless you’re in Las Vegas, isn’t it nice to know that your smartphone is making you that extra bit smarter?