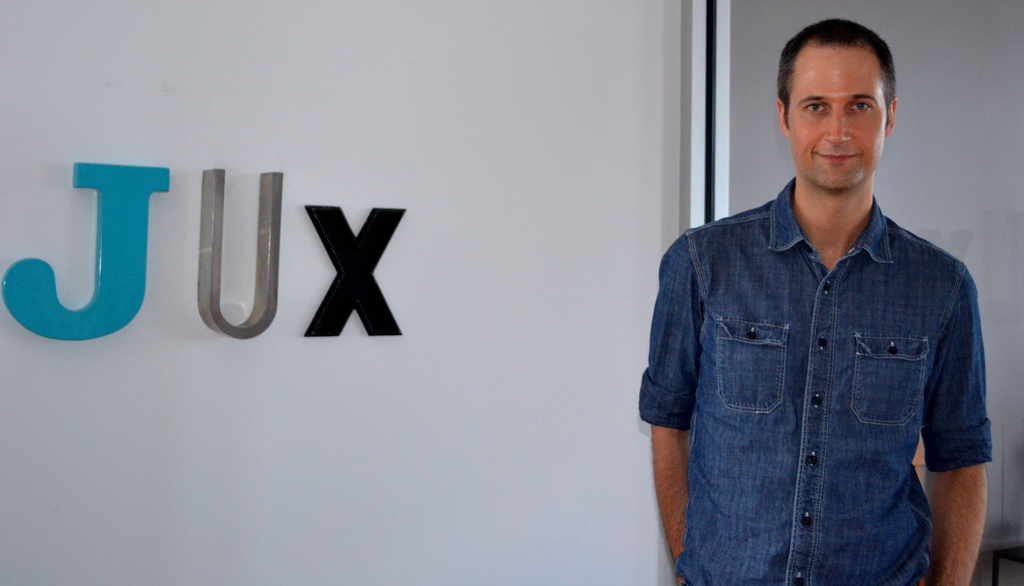 You’ve heard the story before. It’s why Instagram outcooled Hipstamatic, why Facebook killed MySpace and why Apple is dominating. These are companies that arrived later to the playing field and thus dominated by watching the mistakes and innovations of their predecessors. In a sense, it’s why the tortoise won the race.

The youngest of the blogging tools currently used is Posterous, which is 3 years old, followed by Tumblr, which is 4 yrs old. WordPress, which powers over 50 million blogs, has been around since 2003 and Blogger has been around since 1999. The current blogging landscape includes fantastic distribution channels, but on the content creation side of things, we’re dying for more. It’s why we enjoy platforms like 500px over Flickr and products from Apple over Acer. We want our content to look beautiful.

Today marks the official launch of Jux, a New York City new media startup that’s perched at the crux of Tumblr and About.me and Flavors.me. It’s creation. It’s sharing. But it’s also permanent and personal. Jux isn’t about one off creations a la Tumblr. It’s a place where you can create a story, own a topic and be proud of your blogging. I hesitate to call it blogging in this format, because it’s more of a showcase for your thoughts, photos and anything else you might want to share.

“We don’t think there’s any way right now to create something you’re really proud of,” says CEO Ted Metcalfe. “Our mission is to up the creativity of people online, the masses.”

“We want our content to provoke. We want our users to think, ‘I’m going to wrap my head around this topic and make this into a bon bon for people that they’ll want to devour. We want to bring the art director out in people. This is a platform for the next generation that’s been brought up on multimedia and knows how to play,” says Metcalfe.

Being a writer, pseudo photographer and all around online broadcaster with needs to store and share, Jux’s tools immediately turned me on. New post options include Block Quote, Article, Photo, Video, Slideshow or Countdown.

What I like about Jux versus Tumblr is that content on Jux stands on its own as opposed to getting lost in the stream of a Tumblr blog. The site is simply 100% fullscreen content with big typography and easy to use wysiwyg editing tools which let you manipulate styles, insert fun images (mustaches anyone?) and play with options like color and alignment, and of course it being 2011, you can share posts out to social networks as well as embed and email.

The Jux project began in March 2011 with a mission to help more people make better stuff. You know, “just jux it,” they say. Previous to launch, Jux says it has accrued 50,000 signups. “We’re in a steady state, and still figuring this out,” says Metcalfe. “What we’re saying is: ‘Here’s a new place to play.'” Metcalfe brings over 10 years of experience in interactive design and leads the Jux team, which he describes as “a bunch of crack computer scientists.”

Jux founder and lead investor Mark Gorton is best known for having started Limewire, a peer-to-peer file sharing client for the Java Platform. With a history in open sourcing and creative commons licensing for websites, Jux will focus 100% of its efforts on helping people to better express themselves online, says Metcalfe. That having been said, all content on Jux is licensed by Creative Commons by default. When asked about what’s under the hood: “It’s hardcore Javascript, HTML and CSS type. I’ve never heard the word flash,” he answers laughing. Jux taps Flickr and Facebook’s APIs for imagery.

The word jux stems from juxtaposition. “We want to be simpler, bigger and faster than everyone else but we’re still about art and about putting things together in new ways,” explains Metcalfe. “We’re like the Fairy Godmothers of Creativity.”

Check out some of the worlds taking shape on Jux:

And it may come as no surprise to learn that Jux looks great on an iPad. The company has recently hired someone full time to continue working to tablitize Jux’s content. Metcalfe envisions Jux becoming the personal publishing choice for the iPad era. According to Metcalfe, Jux will always free for the user. However, he does believe that businesses should pay if at all possible. He’s had spitball conversations with marketers about how they should use it, such as building suites of creative stuff around products. Jux plans to offer customization for these big clients, so they can get it into the hands of their fans. He imagines businesses and brands pumping virtual goods into the ecosystem, such as specially created imaging effects.

In many ways, Jux is just a new, beautiful blogging tool. But, in other ways, Jux is a new technology project in the arts, an online easel for your thoughts, photos and daily musings. Try it out here.

[Note, that since publishing this post, the site has been experiencing issues. Jux was receiving extremely heavy traffic today, but everything seems to be in working order now.]

Read next: 96 minutes without a pulse: How Capnography saved this man's life.