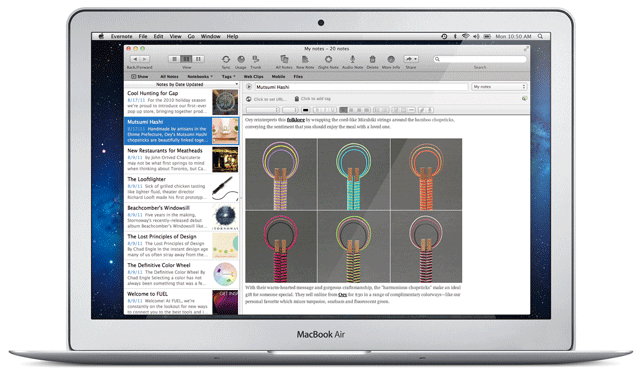 Evernote 3.0 for Mac has dropped today, the announcement of a raft of exciting new features and a new look. The improvement marks a continuing evolution for Evernote on the Mac OS X line, complete with a full screen mode, a simplified display and a
a favorites bar.

The features update relies on much of the existing codebase from iOS, with visual polish to help simplify the user experience. Additionally, Evernote says that they’re always on the lookout for ways to make their experience consistent across devices, and there are iOS versions for Apple products, as well as Android, and Windows Phone 7 compatible versions. The new update brings the feature suites even closer together.

August has been a big month for Evernote. Last week they held their annual conference, and announced the acquisition of Skitch, as well as rich text formatting and a new UI for the iPad. Evernote is showing that it not only knows how to create a unique, and powerful cross-device experience, but with so many exciting announcements in the space of a week, we should clearly expect more in the future.