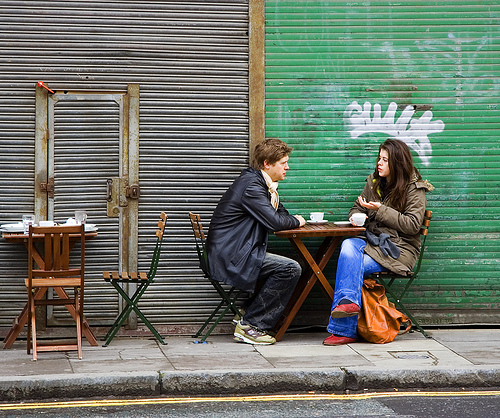 There’s a slick new app that just launched, thirdplace, which hopes to help you make new friends online through your shared interests.

“At a third place, there are no strangers,” says creator Jamil Abreu. “Everyone provides a brief, anonymous introduction to their life – and you can initiate a conversation with anyone.”

Users log in with their Facebook accounts, and can choose to enter rooms where they’re likely to encounter people with similar interests. Right now there are just three rooms: San Francisco, New York and Hacker News, but more rooms are soon to follow.

Thirdplace has a very clean, if spartan design. After being presented with a brief tutorial, users land on the main page where they can choose and start up a private conversation with a like-minded individual. Navigational icons float off to the left of the chat pipeline, and there’s lots of negative space, so that interactions focus on the conversation at hand.

In the physical world, Starbucks is officially the unofficial the “third place,” somewhere that is not home, or the office, where people can get together and socialize in a comfortable environment. Abreu sees the thirdplace app serving a similar role. “I’d like it to be useful to people anytime [users] feel like they could use a conversation with someone who understands them, and be able to build potential friendships that way,” says Abreu. “In an alternate dimension, I envision a physical “third place” where people can use the app in a crowd or event to get to know people they might not have otherwise known were even there.”

Third Place may, however, be succeptible to what MoveOn.org founder Eli Pariser calls “filter bubbles,” in his recent TED Talk. A filter bubble is a narrowed view of the world based on our Internet usage patterns. Search engines and other online services store our browser history, and other information about us, so that they can give suggest more relevant, targeted content. However, because it’s targeted content for which we’ve already expressed a preference, we get more and more of it and have less chance to discover new or interesting information outside of our pre-existing tastes. The advantage of a print newspaper, or a magazine, was that on the way to finding the sports page, or the weather, you had to flip past stories about local politics, or travel, before you got to the stuff you really wanted. The problem, then, with filter bubbles, is that we skip past anything that might interest us, and go right to the stuff we already like.

The site is in its very early days–Day 1, in fact–so there’s no reason to think that rooms won’t be populated with much larger groups soon. Abreu says that he wants people to be able to submit conversation room topics the way that people now submit apps to the iTunes App Store. “In the future, there will be many more and users (which we call ‘guests’) will be able to combine rooms to create a crowd of very specific people to introduce themselves to.”

Right now the site is free to use, and Abreu says that he’s hopeful companies or event organizers might pay to have private rooms for specific uses.

Read next: AppAddictive: The next big platform for brands and social media?