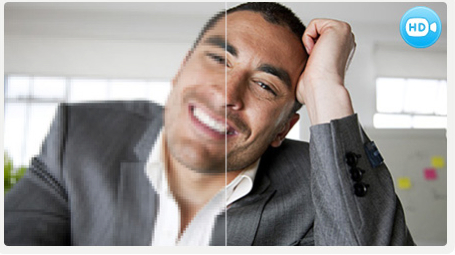 Skype has just announced that it has today released Skype 5.3, bringing support for OS X Lion and HD video calling. The update is available now by opening Skype for Mac and choosing Check for Updates. It is also now available for direct download on Skype’s site. The addition of high-res HD calling is a welcome one and official support for Lion should fix some bugs that people have been experiencing.

Skype reccomends a minimum upload speed of 1.5mB/s to use the HD video calling feature. You will, of course, also have to have a third-party HD capable webcam or a those built into the newest Macs.

We tested out the service and found the video quality to be very good initially, but had difficulty retaining the HD stream, even on solid wired connections. Skype’s automatic quality adjustment kicked in fairly soon after the call began. You can see that the quality is decent, if not great, in the first shot below, but then degraded significantly over the next few minutes.

The upgrade to support Lion is a welcome one, although the much-maligned Mac interface has not recieved any significant changes in 5.3. The HD video calling is also a great upgrade, although the jury is still out on how well Skype is able to maintain an HD stream, even over a solid connection.

If you try out Skype 5.3 for Mac’s HD feature, let us know how it works for you in the comments below.