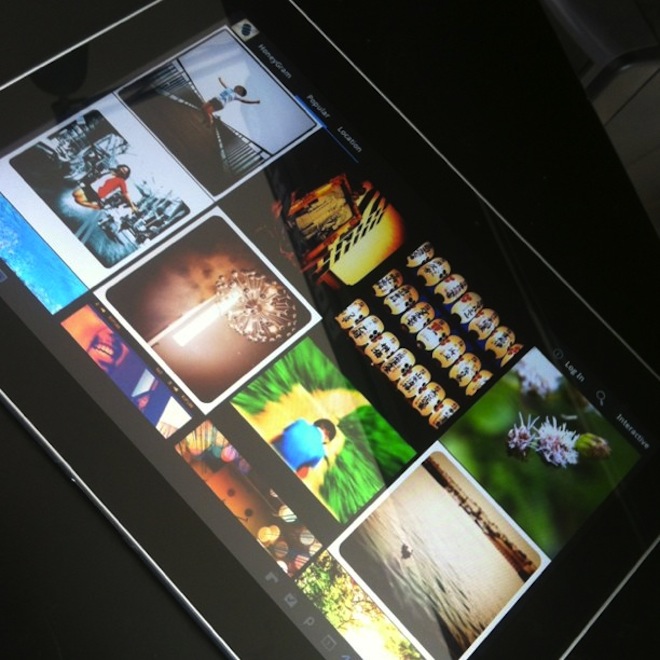 I might be one of about 3 people in this world who loves both their iPhone and their Honeycomb tablet, but a new app called HoneyGram is hoping that there’s more people like me hanging around. HoneyGram is an Instagram browser that gives you a beautiful interface for browsing photos via your Android Honeycomb tablet.

Mind you, this isn’t Instagram for Android. We still don’t have that, and only the Instagram folks know if we ever will. But there are loads of interesting photos that get posted to Instagram every minute (browsing the popular ones has become one of my favorite gadget-heavy pastimes) and HoneyGram lets you take it to the couch, instead of being tied to other desktop clients.

There are a few options that exist for everyone, comprised of the ability to view the popular photos, to search by location or to search by tag. If you, like me, happen to be an Instagram user, then there are more options that are opened for you.

Now, about those widgets. Any HoneyGram user can set up a popular photos widget on their home screen. If you’re logged in to Instagram, you can also set up a tag search widget, one for your photos and one for your friends’ photos. Again, there are some big benefits to at least having an Instagram account.

The big show of HoneyGram comes in the “Interactive” mode. From here, a screen full of the most popular photos will populate and you can move them around or get rid of them completely. There are gestures for up to five fingers, but I have to tell you that it gets a bit crowded and doesn’t always work exactly as intended.

The interesting part is that the multitouch gestures don’t work quite how you think they would. As you can see in my video, I had trouble rotating a picture. That’s because you’re supposed to keep one finger in place, while dragging another one around. It’s neither the most intuitive nor is it the easiest to use method for rotating a picture, but a later test confirmed that it did work.

Otherwise, the app is quite nice. Running it on my Galaxy 10.1 tablet, I had no problems with interface lag and scrolling was as smooth as silk. I’m not certain that I like how individual photos are displayed, but that’s just a matter of personal preference. Regardless, for a free app, it’s not worth complaining over and it does what it says it will do. Fair play, HoneyGram. Nicely done.

Read next: Groupon India may have just been hacked [Updated]