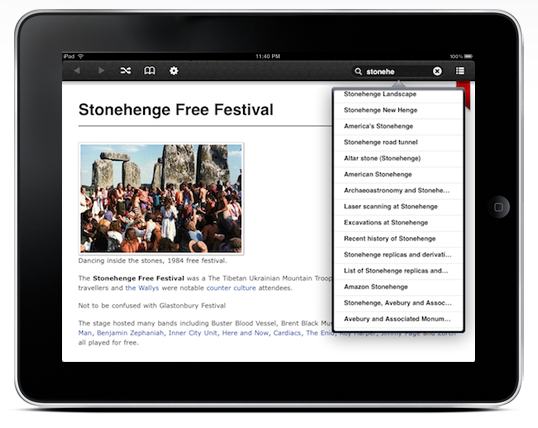 There isn’t a single application that has had a greater influence on my knowledge of trivia than All of Wikipedia. In the few days I’ve owned the app I’ve learnt (amongst many other things): that Steve Jobs is Disney’s largest shareholder, that there are more languages spoken in London than in any other city in the world and that if two pieces of metal touch in space, they become permanently stuck together.

Agreed, not the most actively used pieces of trivia but fascinating none the less.

All of Wikipedia brings literally all of Wikipedia to your iPhone and iPad for offline reading and browsing, it’s not the only app to do it, but it is the best. Now why would you want to take up all that space on your device when you can simply access it via your phone’s browser or via one of the many other Wikipedia apps? The short answer, at least in my case, is because it’s quite simply an extraordinarily powerful feeling to know you carry one of the world’s most informative and extensive resources in your back pocket, available wherever you may be as long as you have battery life. Whether you’re online or off (more often ‘not’ in my case thanks to O2), you have the ability to research, read and learn about any topic of choice. Yes Wikipedia has its flaws but let’s be honest here, it’s unquestionably the most current, thorough and freely available resource online and off. While I still enjoy sitting back and reading from my Instapaper account, I’ve become obsessed with researching articles on every remotely interesting topic that comes to mind – occasionally I even put the app’s “random article” feature to use. Yes, I might get tired of it all soon, but after seven days of absorbed reading, I’m still enjoying every word of it. In contrast to my normal self, I even quite look forward to entering the London underground just to immerse myself in one of the thousands of wonderfully informative Wikipedia articles without distraction.

But I digress. Let’s dig into the app itself.

The universal app is developed by Canada based Brilliantish Software, it’s gorgeously designed, feature rich, includes a number of design options, is a breeze to use, features a powerful in-text search facility and loads articles extremely fast. Articles are updated whenever you have an Internet connection and similarly, images are downloaded as you read the article only when online. The app also comes available in English, German, French, Spanish, Russian, Italian, Portuguese, Arabic, and Dutch.

Unlike Wikipedia.org, All of Wikipedia is not free, it will set you back $8.99. After purchasing, you are prompted to download the first data dump over wifi (4GB in English, 2GB for other languages). This takes between 3 and 4 hours. Your initial purchase allows you to download the Wikipedia data dump and then also download it again once after that for free. After that a $1 in app purchase will be required to cover the hosting and transferring of the file, this generally happens once a month.

if you’re one to unwittingly find yourself deeply absorbed in random articles on Wikipedia, this app belongs on your home screen. Grab it here (iTunes Link).