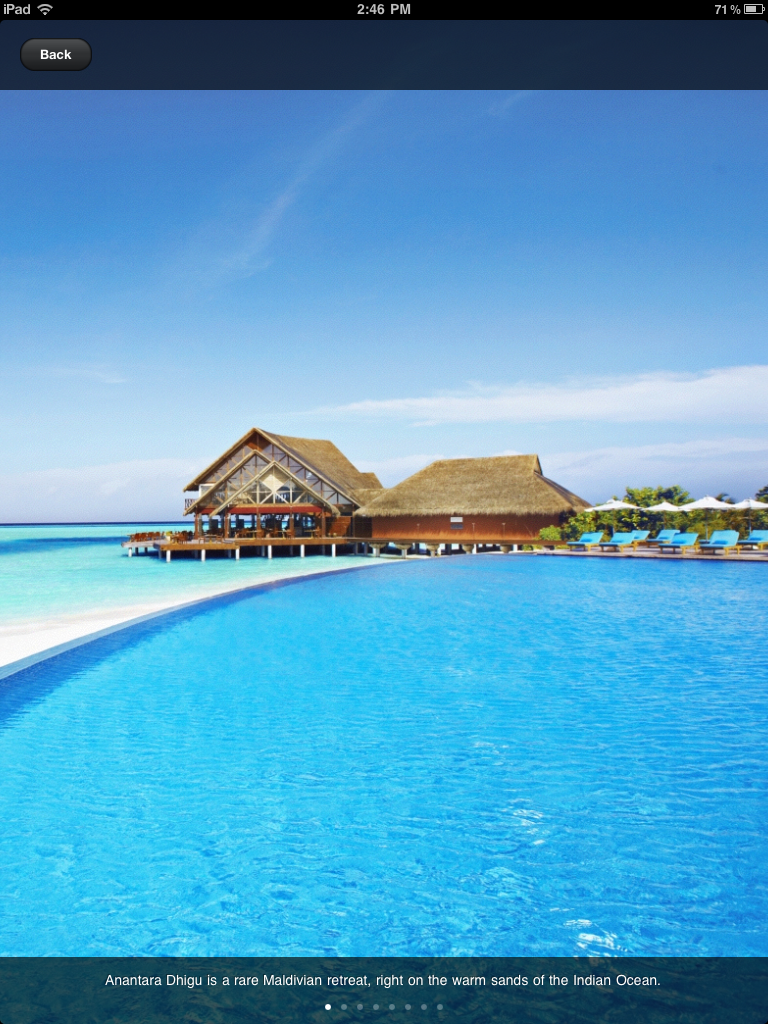 It’s a rainy afternoon in New York City, and inside the Jetsetter offices, its 65 employees are tenaciously planning what could be your next dream vacation whether it’s an extraordinary global hotel deal or an unforgettable experience like safaris in Africa, cooking classes in Tuscany or bike tours in Turkey.

“We’re in the business of being an enthusiast,” says Jetsetter’s CEO Drew Patterson.

With funding and incubation support from Gilt Group, Jetsetter launched in September 2009 with 15 employees. In less than 2 years, it has grown to 65 employees; CEO Drew Patterson wants to double that figure by the end of 2011. To date, the company has booked over 200,000 rooms in over 70 countries and has 2.25 million subscribers. While the company won’t release official numbers, at $250 a night (most of Jetsetter’s hotels are north of that), that’s 50 million in gross bookings in just 18 months.

Patterson claims that a key differentiator of the site is its curation service. This process is a combination of its curators traveling the globe and hand-selecting great spots and the Jetsetter verification process by which one of its 200 correspondents experiences the vacations and verifies it will exceed member expectations. Jetsetter has a team of 9 full time editors and a network of 200 correspondents who personally vet each hotel and experience to make sure its up to Jetsetter’s standards.

Surprisingly, only 10% of its user base is located outside of the US., which means it has plenty of room to grow. And to spur this growth, Jetsetter recently announced its first white label partnership with ASMALLWORLD (ASW), an exclusive invite-only travel site with over 660,000 worldwide members, generally the affluent, jet-setting type.

But what is a jetsetter without their iPad and iPhone at their side? On the last day of February, Jetsetter released its first iPhone app, and in a month’s time, it’s had over 34,000 downloads. Today, Jetsetter unveils its first iPad app, which it promised back in February would be “mind-blowing”.

Jetsetter’s first iPad app is the culmination of what the company has been trying to do as it “sits with a foot in two camps”: an e-commerce site that’s also a discovery site for inspiration and ideas. The app has an editorial sensibility equivalent to an issue of Conde Nast Traveler pervades, bolstered by 360 degree images and the ability to process transactions within the app. Check out a few select screenshots below (click to enlarge): 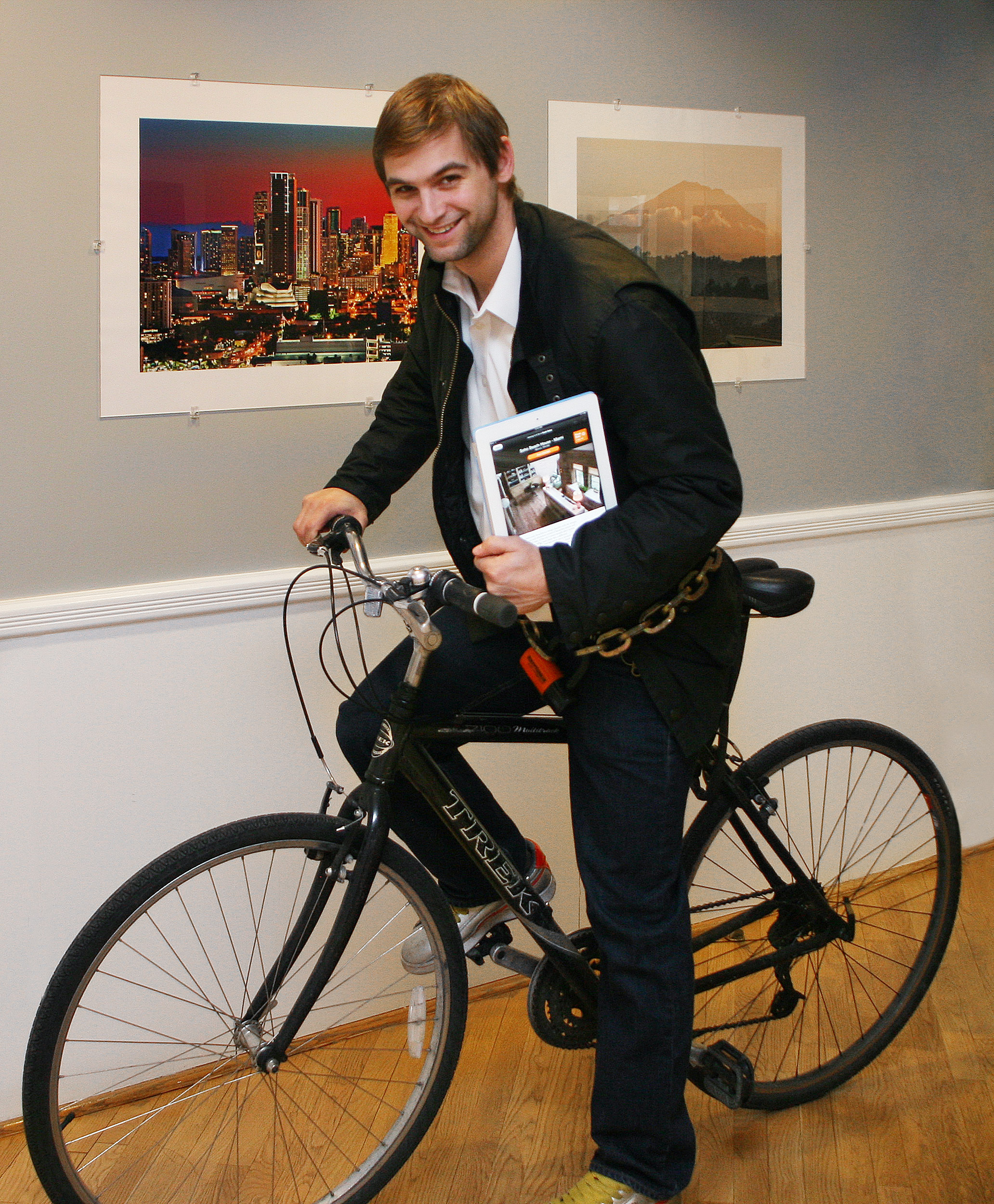 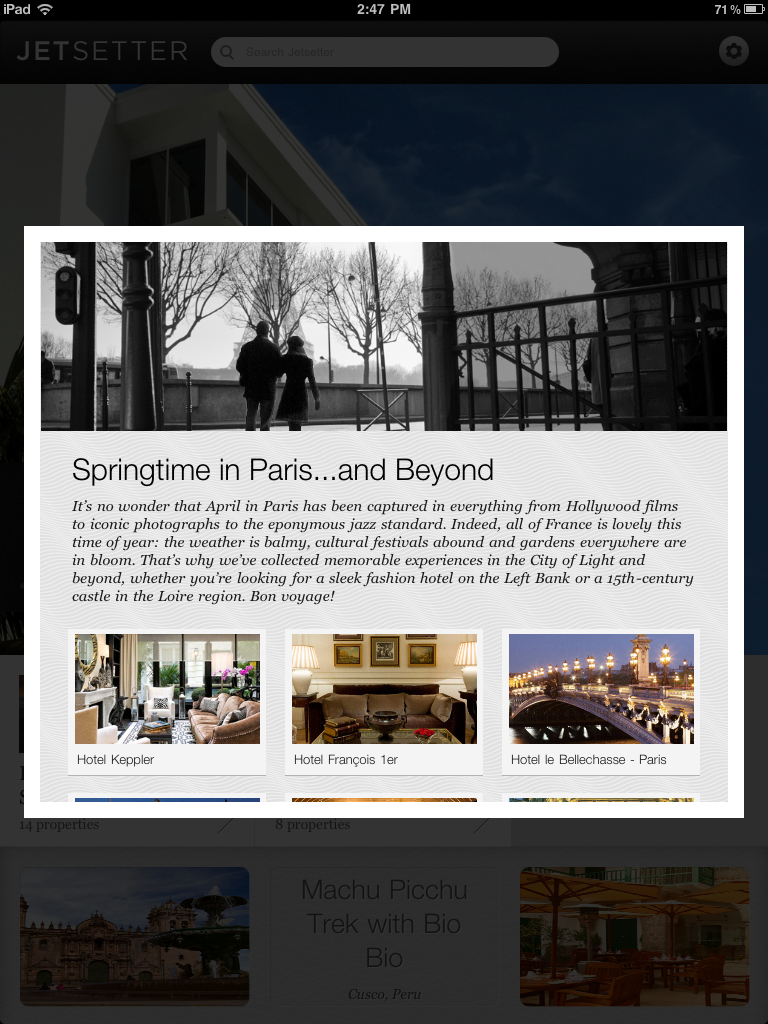 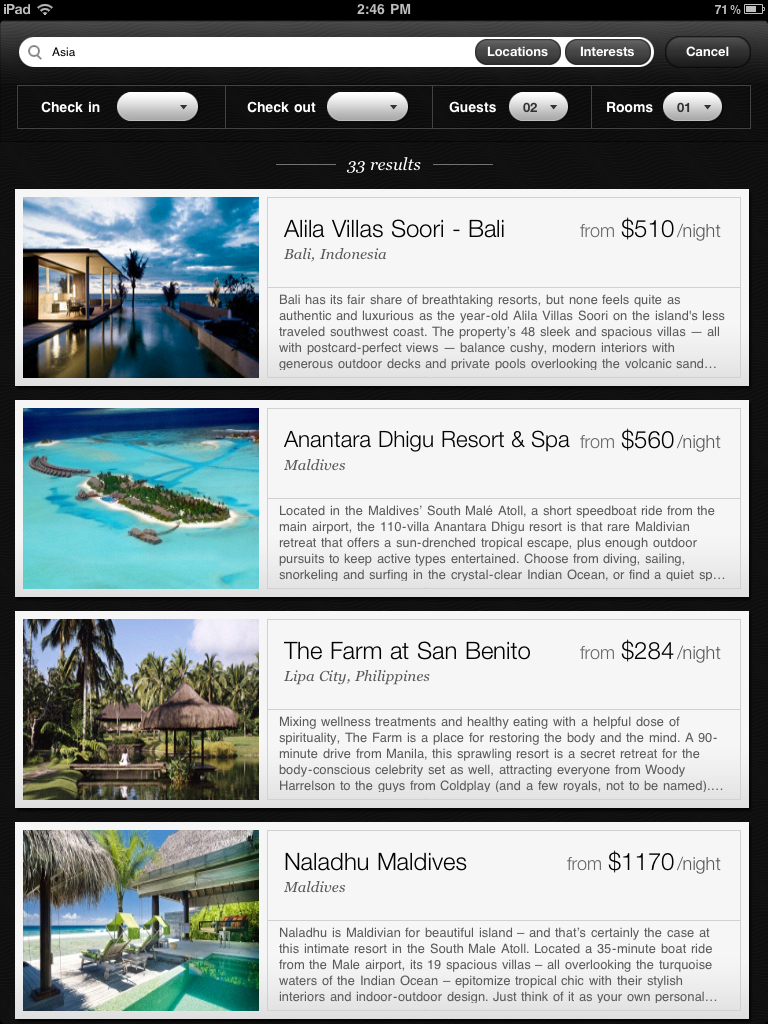 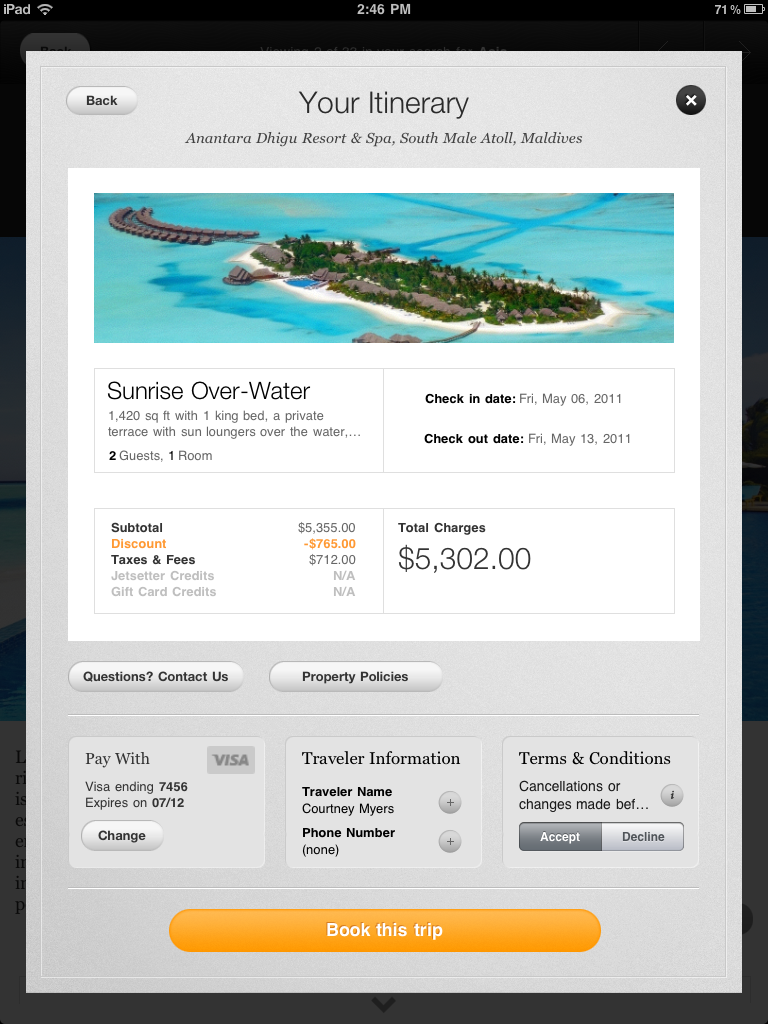 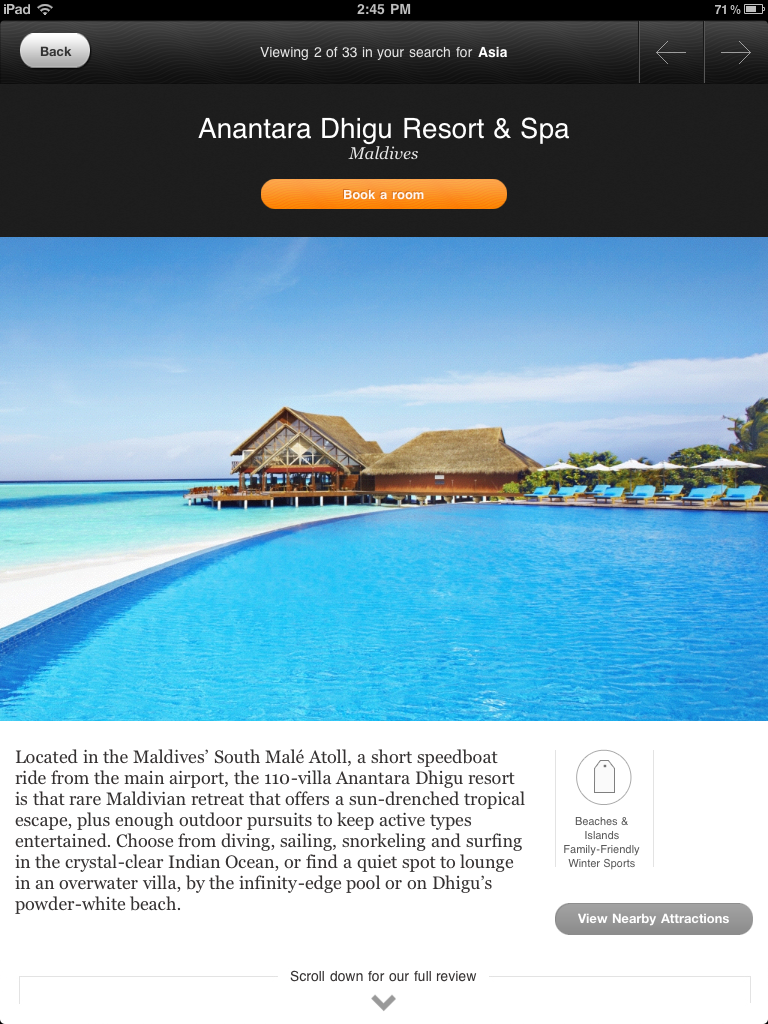 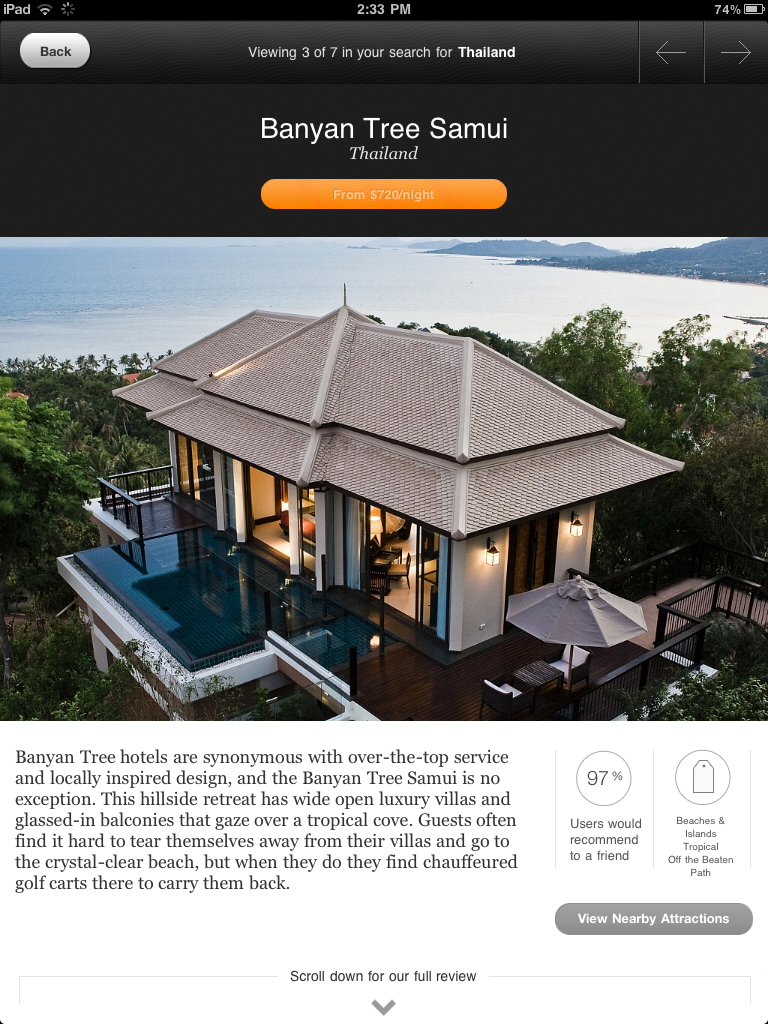 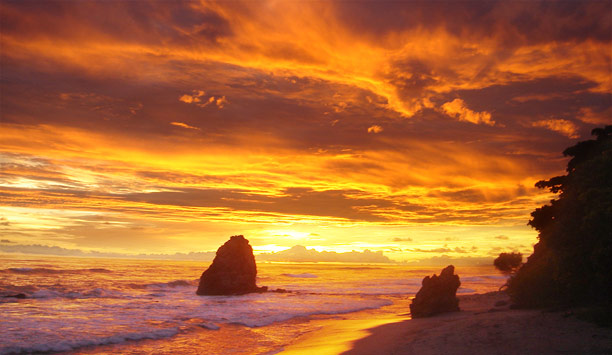 Last night at a private event for travel media, Apple featured Jetsetter’s iPad app as one of the best travel apps for planning summer vacations. Earlier this week, Patterson sat down for a laid back video interview with The Next Web to discuss the company’s success, progress and of course, to show us their shiny new iPad app.

Jetsetter has an open office environment; even Patterson sits at a desk in the middle of the room alongside his team. Patterson, who usually rides his bike or skateboards to work, uses the same worn backpack he’s had since his days working at the popular flight search engine, Kayak. In 2011, he’s already been to Istanbul, Turks & Caicos, Costa Rica and Switzerland. He loves to fly Virgin (America and Atlantic) and says his iPhone is his favorite travel gadget…although his iPad is never far from his side.

Since employees at Jetsetter spend all day, every day finding better ways for you to exercise your wanderlust, it makes sense that Jetsetter doesn’t have its own set-vacation policy. “We’re all adults here, so it felt silly giving them a certain number of days. They can take off whenever they want as long as they take care of their responsibilities. But they need to take at least two weeks off, and I’m a bit worried that a few of them didn’t last year,” Patterson says, his voice trailing off. Sound like a place you’d like to work? Jetsetter currently has over 30 open positions across the board- engineering, marketing and member services.

Read next: Extragram! Extragram! Hear all about the sweet new Instagram web app