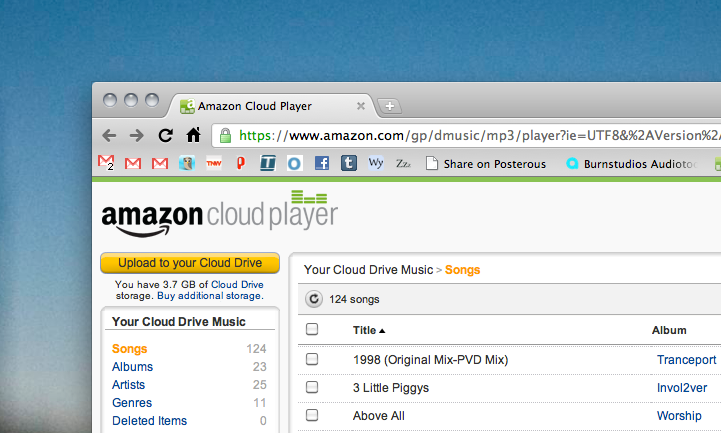 If you’ve seen the news today then you already know that Amazon has released its Cloud Player upon the music-loving masses. While it’s not ground-breaking, it’s still very cool. However, there are a couple of caveats.

I’ve been using Cloud Player since the wee hours of this morning and here are a few of the things that I’ve found that I think you’ll want to know about. To start, here’s a video walkthrough to show you exactly how it all works. Keep reading after the video for the finer points.

It’s Not Spotify or Rdio

When it launched, I started seeing people saying that Spotify was going to have more competition in the US for its launch. This is just plain wrong. Cloud Player does only what you’ve purchased through Amazon or uploaded to it. No more, no less. It is not a music discovery service, it’s just a cloud version of your local music library.

This is both good and bad. For people like me, we own a lot of music that “discovery” services don’t have. We love our music and we love to play it. For playing your own music library, Cloud Player is fantastic. For finding new music? Not so much.

People seem shocked that there’s no native application for Cloud Player in iOS. Honestly, they shouldn’t be surprised in the least. Amazon has made a hefty investment in Android and its own services. Pairing with Apple would be a risky move at best. What it should have done, though, is provide a fully functional mobile version of the site for iPhone owners. As of yet, that hasn’t happened.

If you’re an Android owner, you’re going to be pleased. The app works, and it works well. The same can be said for every major browser. I’ve not yet found a version that doesn’t work flawlessly with Cloud Player. Note that I did say modern. Don’t expect it to work well in IE6 at your office.

If you tend to listen to mixed albums by DJ’s and the like, this is going to be a bit annoying. The present version of Cloud Player has a minute, though audible gap between tracks. It’s not quite enough to break your “vibe”, but it’s still there.

Most streaming services also do a task known as transcoding. The idea is that you probably have high quality music stored on your drives at home. When you’re wanting to stream, you want to do so in a lower quality both to save bandwidth and to make it more widely available over mobile (3G) connections.

Cloud Player doesn’t do this. If you upload a 320k mp3, it’s going to stream back to you in 320k. While that’s great for the audio snobs in all of us, it’s not so great for trying to stream your library in areas of lower reception. As 4G networks become more pervasive, it will become less of a hassle. Though you’ll still need to watch how much you stream. You could eat through your 2 or 5-gig monthly allowance pretty quickly.

What you’re left with is still a very solid product, but you have to take it for what it is. Cloud Player isn’t music discovery. It’s not even the next generation of music. It’s simply something that we should have had since the dawn of digital music stores. Oh, and it’s a lot of fun.