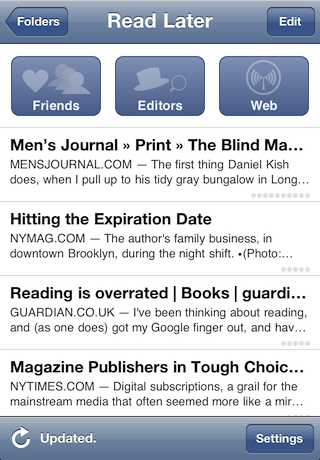 Instapaper has removed starring and replaced it with a Facebook-esque “like” feature. You can now follow other Instapaper users, allowing you to see and read the posts that they’ve liked. The app’s browser has been rewritten so that you can browse any site and share it from within the app.

When you browse to a site with Instapaper, you’ll be sent to the regular site as if you used Safari. To see Instapaper’s readable version of the site, you’ll need to click Read Later and then open the article from your list.

The Editors browser curates content chosen by featured editors on various subjects for those who want to bypass the noise of the Internet.

The new version also improves the app’s sharing features, bringing native sharing to Facebook, Twitter, Tumblr, Pinboard and Evernote. One major improvement is that you don’t need to be online to share–the action will be queued and go out the next time you’re online.

With these features, Instapaper just became a social network for web content readers. This is the first release of the app with social features, so we can expect future releases to take the concept further.

The new version of the app has also introduced a smart rotation lock feature that determines whether you’ve moved the screen by accident or you’ve actually repositioned it, preventing it from switching orientation unnecessarily. Apparently it works quite well, though we’ve yet to test it. There’s nothing more annoying than a constantly changing screen orientation when you’re reading while lying down.

Instapaper 3.0 is a free upgrade to existing users, or US$4.99 for new users.